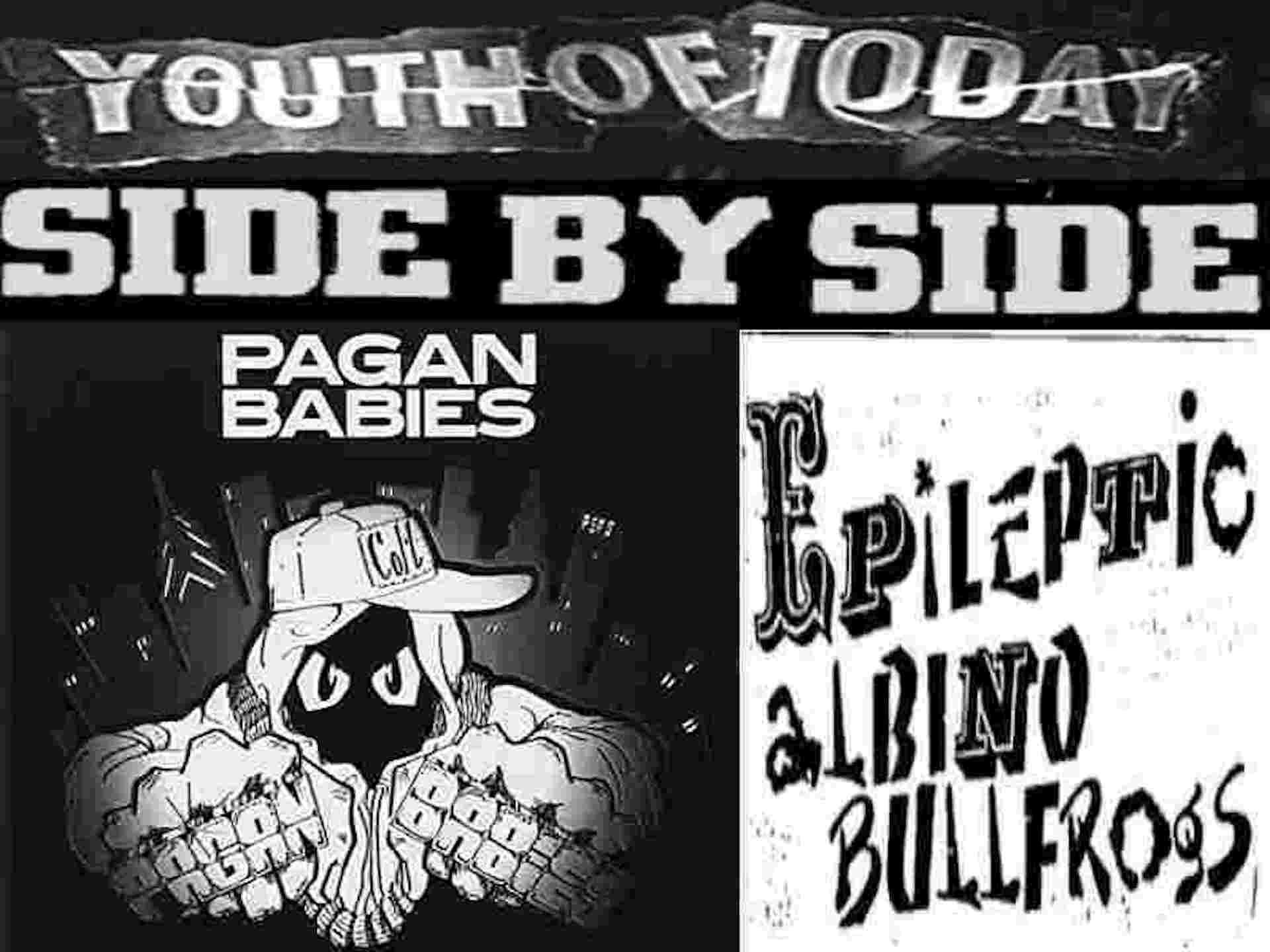 YOUTH OF TODAY / SIDE BY SIDE / PAGAN BABIES / EPILEPTIC ALBINO BULLFROGS

Well, ladies and gentlement. I’ve seen it — the best show ever! I’ve seen many good plans play, but for an all-around strong performance by every band on one bill, this was it.

EPILEPTIC ALBINO BULLFROGS opened the evening. Although they got off to a shaky start by messing up their introduction (“The Munsters”), they started over and bounced back well. Playing their own unique style of thrash, they were hard and fast enough to get a decent-size pit thrashing. It was definitely the best I’ve seen and heard them yet and I hope they continue to progress musically (and lyrically) as they’ve been doing. They’re young, but there’s no denying there’s talent there – no matter how raw they may be,

Philly’s PAGAN BABIES were next. I haven’t heard their debut 7″ EP on Positive Force (is it out yet?), but I know that if they sound as they did tonight, no one will be disappointed. This is only the second time I’ve seen them (the first time being their debut on December 28, 1986 — see Issue #1), but I believe there was a marked improvement. They sounded very polished and tight (though they did mess up on one song — “Fuck You I’m Punk”. They did it over with an extra “oooomph!” that totally overshadowed their mistake.) An incredibly energetic performance, from which the audience fed off of completely. Their fractic pace bought members of both SIDE BY SIDE and YOUTH OF TODAY into the pit. Pure adrenalin-driven fun.

Like the bands CAUSE FOR ALARM and WARZONE, SIDE BY SIDE is a lesser-known New York City hardcore band (as compared to LUDICHRIST and MURPHY’S LAW). But if they sound as they did tonight, they won’t be for long. I, along with others, expected some bumpy, undefined band who got lucky by getting to play this show. My God, was I wrong! They were young, but this means nothing. Their music is quite complicated and divserified, with a sound that seemed to have a distinct metal flavor, and at other times they sounded 110% hardcore. They show that New York hardcore doesn’t have to sound like the CRUMBSUCKERS or new AGNOSTIC FRONT to be great. Again, I apologize for thinking that because they were young, they would sound scrappy. I hope I made up for it by getting the pit going. Top notch, guys!

I had seen YOUTH OF TODAY a few months back when they opened for the ADOLESCENTS at the Kennel Club. Because I had never heard of them then, I really didn’t know what to expect. What I saw was an amazing display of pure energy and total fun. But it had been a while since I had seen them this time around, so I didn’t know whether they changed at all. Thankfully, once again, I was treated to another incredible live performance courtesy of Ray and company. Duplicating their high level of power as heard on their new LP, they brought the house down! Ray’s vocal duties were all but taken over by those who were able to get onstage and grab the mic (all of this at Ray’s request). I feel this really added to the excitement, but I feel sorry for those who didn’t know the words. Very few people, thankfully.

YOUTH OF TODAY brought about them an aura of unity that wore off on Club Pizzaz, albeit for only a few hours. This was greatly appreciated! YOUTH OF TODAY, as seen by their between-song comments, really do give a damn about the scene, both the kids and the music. Such dedication and intelligence is desperately missing today. YOUTH OF TODAY should be an example to be followed by all young aspiring bands! I’m in love with these guys!