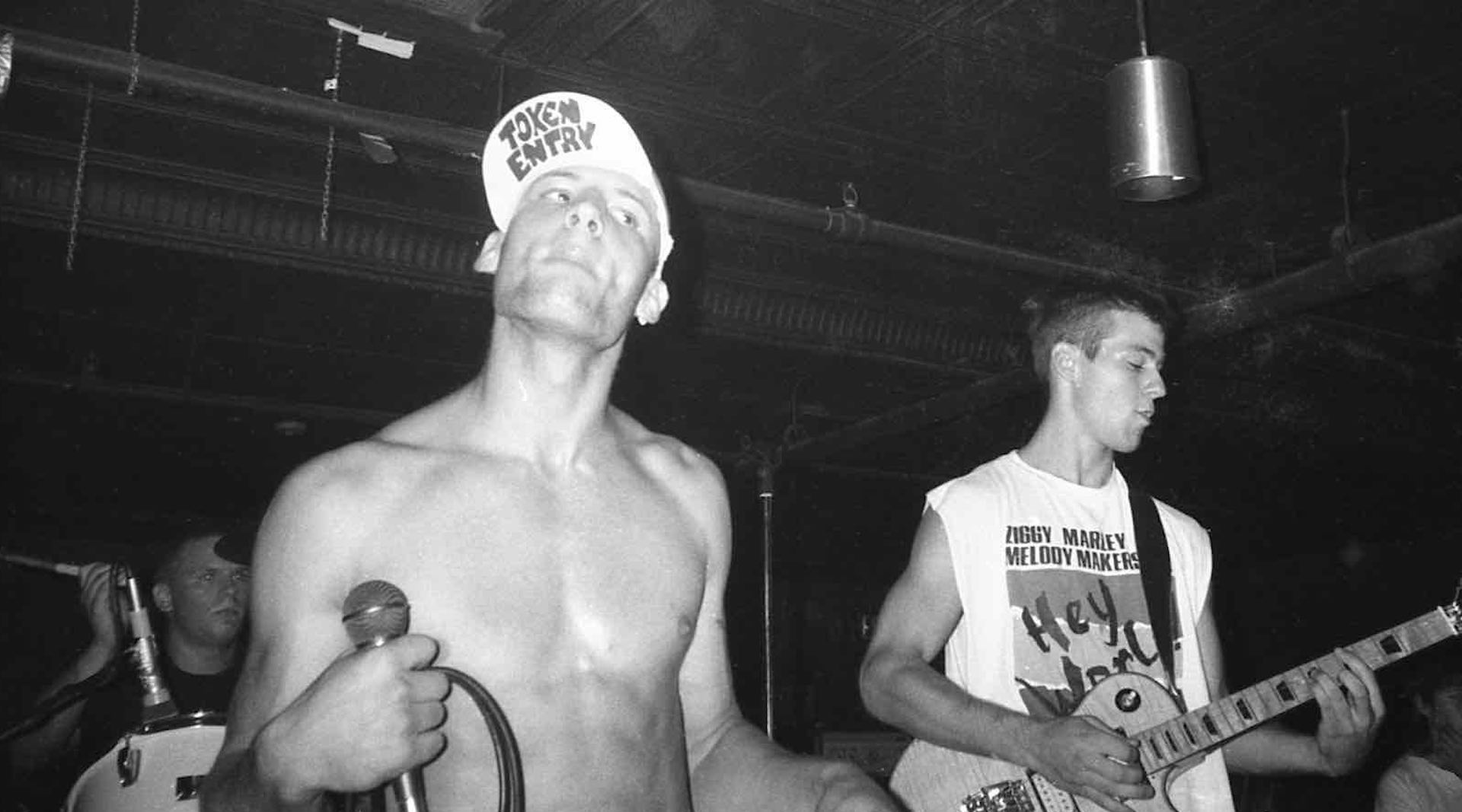 THE UPRISE is a young band from suburban Philadelphia. They've released live demos, played several big shows in the area, and mil soon be releasing an EP. They've often been misunderstood, because of their appearance {they are skins). Hopefully this interview will clarify some things.

How did the THE UPRISE form?
ROB: We formed in June of 1986. We had a rhythm guitarist. We kicked her out in December. We put some demos out, and then everything was going good. We had to kick Mike out because he was being a dork. We got Gavin [ex-NY HOODS, ex-SIDE BY SIDE - Ed.], then he split. Mutual departure type stuff. Musical differences.
SCOTT: Now we have the original band together, except for the guitarist. 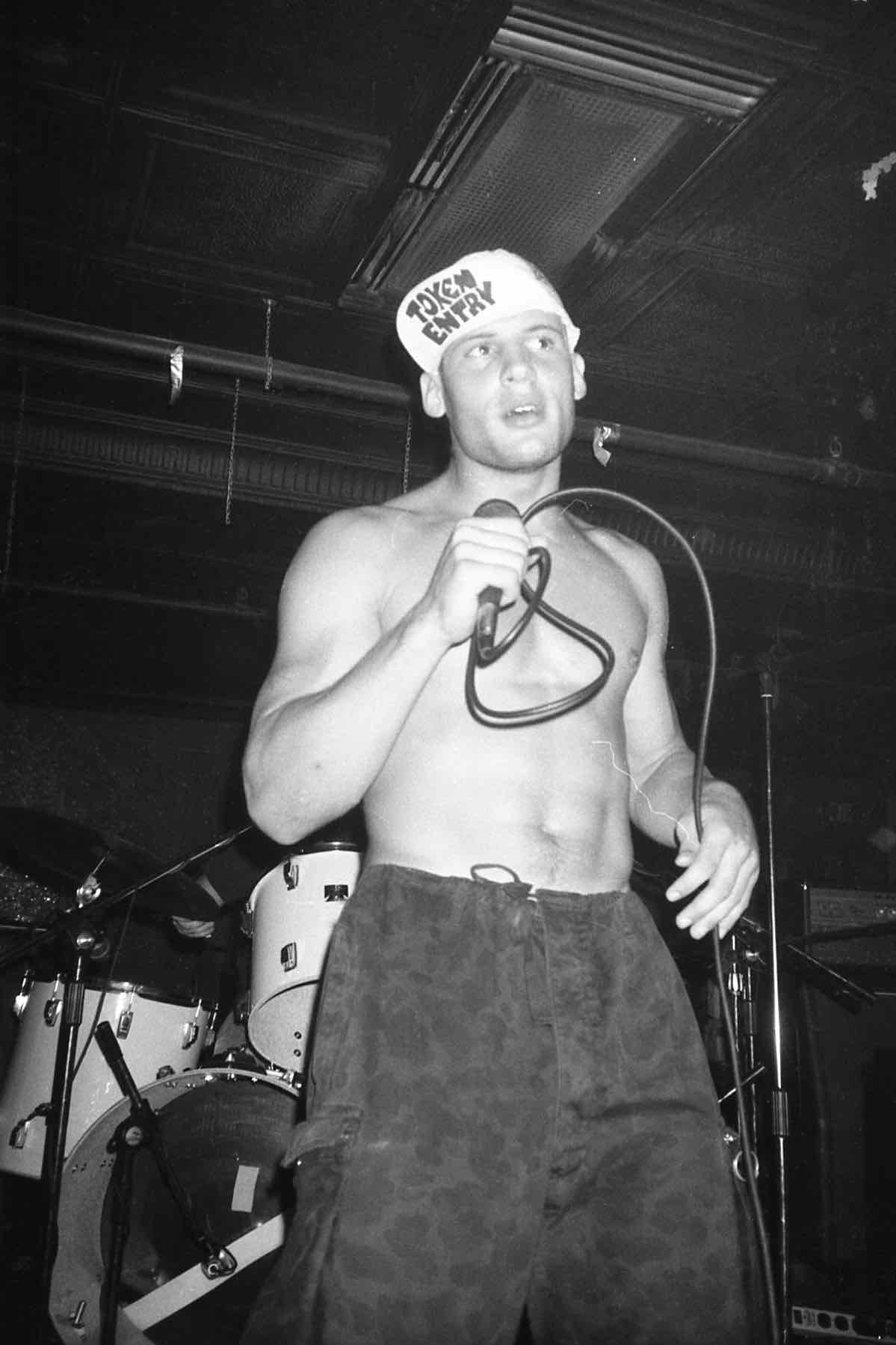 Who writes the music and who writes the lyrics?
SCOTT: I write most of the music. I write all the songs. Well, most of the songs. About 95% of them.
ROB: I wrote "Dick's Deli".
SCOTT: The lyrics and arrangements are pretty such split between Rob and I. Mike doesn't really do that much. Neither does Matt.
ROB: Mike's our guitarist, but he doesn't write any of our songs. He wrote "Walk Tall". You'll only hear that at shows. You won't see it on vinyl or anything. He didn't write the lyrics, of course. He doesn't write any of the lyrics. Matt's just an advisor-type guy, too.

Who would you consider your influences?
SCOTT: Local, a lot of local bands.
ROB: The thing is, a lot of people say in interviews "What are your influences?", and we say old hardcore, DAG NASTY, CRO-BAGS, AGNOSTIC FRONT, and a lot of older bands. And, in my mind, a lot of the smaller bands are a bigger influence, like SOCIAL DECAY, SICK OF IT ALL and TOKEN ENTRY. Not so much smaller bands, but local bands who haven't hit it big yet.
SCOTT: Bands that are on the uprise!

ROB: Like ourselves, I guess. There is a lot of influences: VISION (formerly NEUROTIC IMPULSE - Ed.), LETHAL AGGRESSION jams, and DOC MARTEN is cool as hell.

Do you consider yourselves a positive band?
SCOTT: I think ...
ROB: It's my positive outlook on life!
SCOTT: I think we kind of have a fresh, me idea. It's like, if you take a look at all the bands we listen to, it's really a mixed variety. And that's the kind of attitude our band has, too. We have solid standards, but we have a lot of new ideas, More than the average person, because people view us as a skinhead band. But we're kind of like the "new breed". Not the "new wind", but the new breed.
ROB: So, we're positive, but we're realistic.

I know three of you are skins. What does being a skin mean to you?
ROB: This question really bothers me. Probably because, for me as a person, it means being true, strong, and the brotherhood type of stuff. But besides that, it's hard for me to explain in quick words.
SCOTT: That's right. Just listen to our music. You'll get it.
ROB: We convey the message in our lyrics. Being true, being clean-cut .... Read some of our lyrics - that's what it means to us.

Tell us about your problems with Maximum RockNRoll.
ROB: The guys in JSA (the Jersey Scene Army), a great bunch of guys, did an interview with us and sent it to MRR. Tim Yohannan sent it back and said he wasn't interested. We're skinheads, whatever. Martin Sprouse writes back a couple days later and saying "Send it back to me. I like the band." Whatever. Something like that. And that was in June, and it still hasn't been run yet, so I wouldn't hold my breath about ever seeing it. But maybe it'll show up. 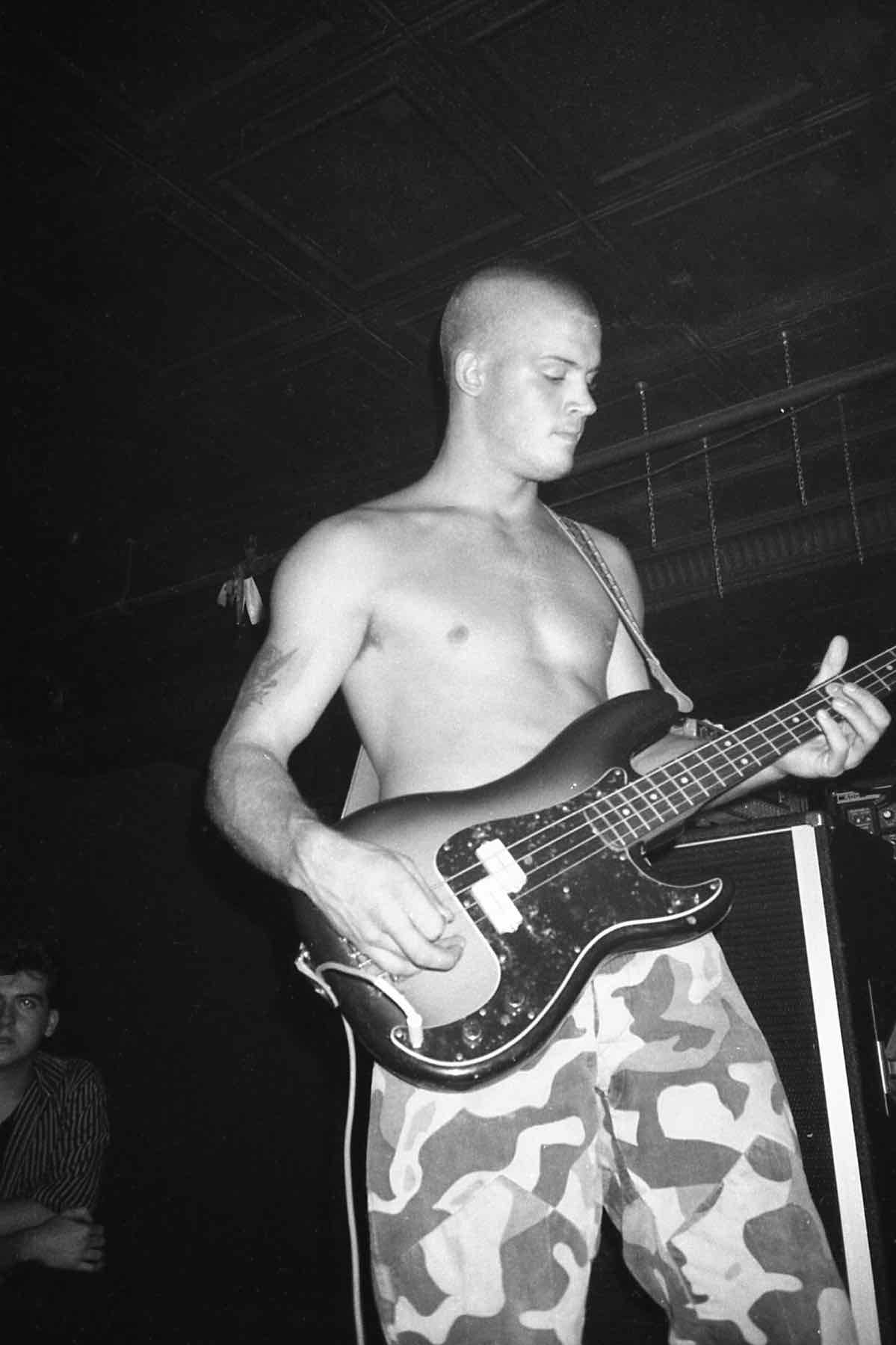 From MRR's reaction, do you feel that skins have earned a bad reputation?
ROB: Yes, very bad. But not always deservedly so. Take us, the band, for instance. We get a lot of crap about people saying we're Nazis, racists, .... It's kind of stupid to call us Nazis, if you take a look at who we hang out with. A lot of our friends are black, Jewish, whatever.
SCOTT: It doesn't make a difference to us. If you're an asshole, you're an asshole. And if you're cool, you're cool. And the people who are giving us a bad rep undeservedly....
ROB: There are people who say "Oh, THE UPRISE are always starting fights at shows", or They're troublemakers." We'll never start a fight at a show, because we want shows to keep going on. If people start trouble with us, well, then....
SCOTT: We're just not afraid to step in and handle things if someone's screwing things up. A lot of times, people only see one side of it, calling us a bunch of skinheads and they immediately jump on us for doing it. We're not afraid to back down anybody. We don't look for trouble - trouble finds us, but we're not going to run from it. 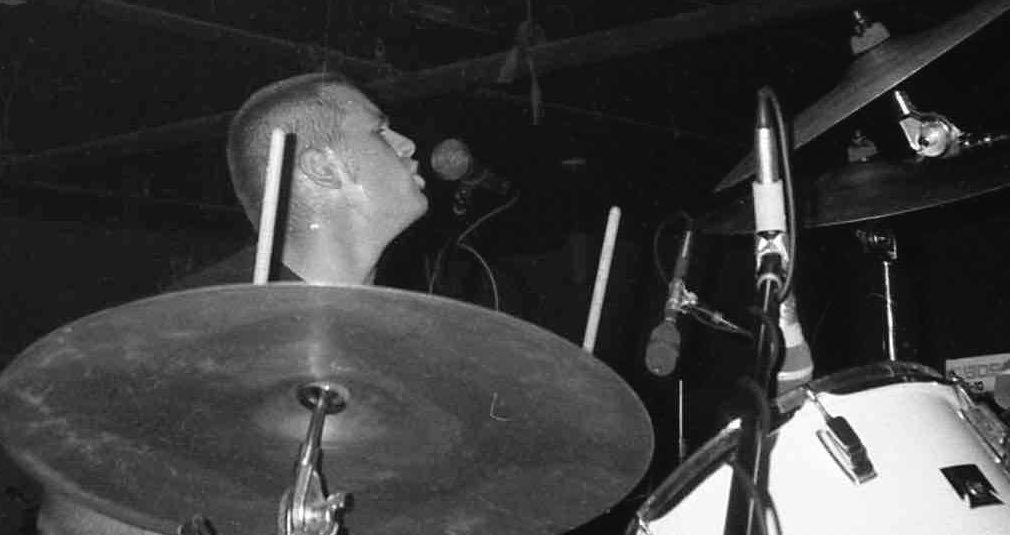 Why did you change names from SUBURBAN UPRISE to THE UPRISE?
SCOTT: "Suburban started out as a joke. Look at everything Suburban Auto Tags, suburban that, Suburban Anarchy School.
ROB: With our name SUBURBAN UPRISE, "Suburban" was very sarcastic, and a lot of people took that wrong. And we like THE UPRISE better.

In our third issue, (Mickey) reviewed your demo, and the review stated that your song "Land of the Free" had a line which I didn't agree with. I thought it meant that you thought that those who didn't want to fight for the U.S. should leave. You said I was wrong. What the hell is it about?
ROB: Well stated! Well, I think you're talking about the line "Want to breathe the air of the free / But won't pay your patriotic fee".
SCOIT: I'm not talking about fighting! I'm just talking about general support. I mean, my brother's in the army, and I'm not going to join, because, well, I value my freedom very much. The kind of fighting my brother does is in a more physical way. I'm trying to make the U.S. better from the inside, you know?
ROB: Support, "Buy American" and stupid stuff like that. It doesn't mean go and fight.
SCOTT: Bringing kids around to see that it's not a bad country. Just any kind of support, not just fighting. Kevin Seconds says "We're gonna fight", but do you yell at him? No.

What are your views on anarchy?
SCOTT: (laughter)
ROB: You're not being too realistic if you believe in anarchy. Do you care to say anything, Scott?
SCOTT: On anarchy? '77! Sid Vicious lives!

What messages do you try to get across?
SCOTT: Stick together. Be true to what you believe in. Don't be stupid! 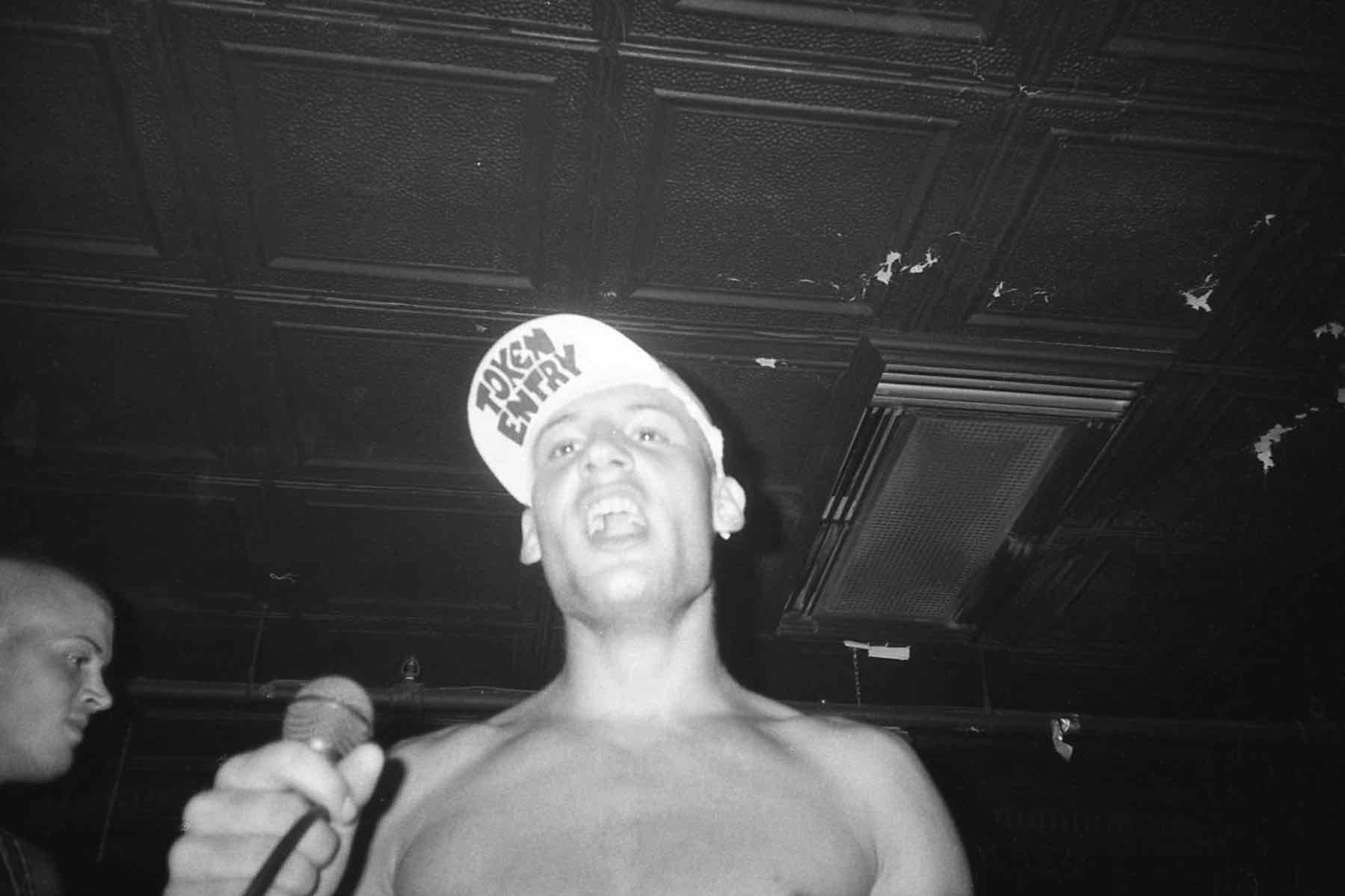 ROB: When we say stick together, we're not saying "Unity! Unity!" like some bands do. We're just saying be true to your friends.
SCOTT: Don't unite against somebody. Just unite to be better.

Have you done any new songs?
SCOTT: Every time we play, we always have two or three new songs.
ROB: No, at every show we have one new song.
SCOTT: Are you kidding me? We have more than that!
ROB: For big shows, we'll have two or three new songs. Oh, by the way, speaking of big shows, in your demo review you said that the CRO-MAGS show (in Trenton, NJ) was probably our first big show. How wrong you are. No, seriously. Before that, we were on the "Uncle Floyd" T.V. show, we played City Gardens (Trenton) in November with DAYGLO ABORTIONS and RAW POWER. We played with A.O.D. in New Jersey. We played the Crypt in Philly with SEIZURE. 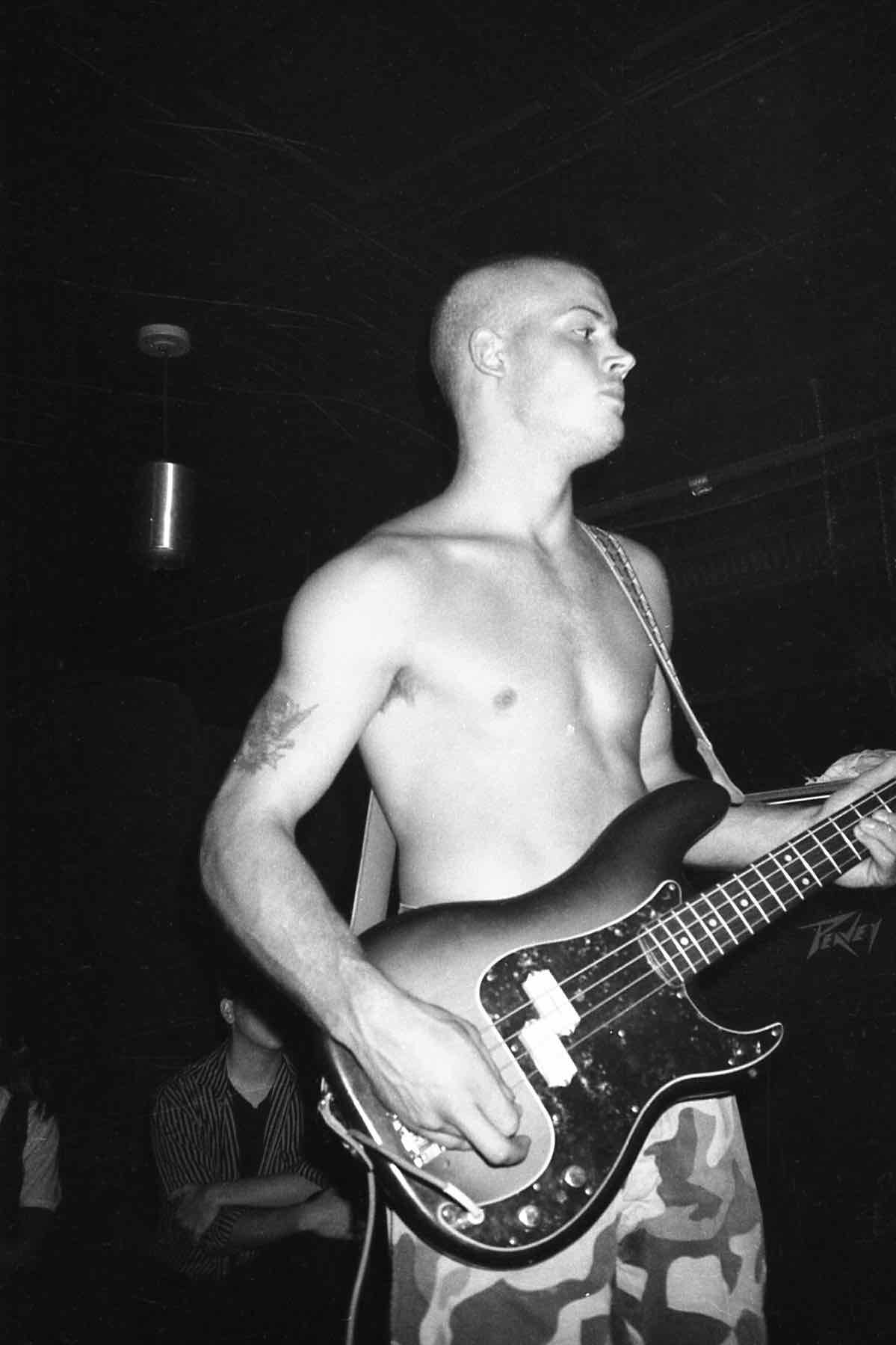 Are you going to have an EP out soon?
ROB: Yeah. We've already recorded and mixed it. It's only going to be four tunes. It should be out in October. We're not sure what label yet. They're a few that'll probably do us.

What's in the future of THE UPRISE?
SCOTT: Just whatever comes up.
ROB: We figure another solid two years. I'll be going to school, but the band should be well-established by then.
SCOTT: We don't really like to look ahead though. That's what it's about - day by day.
ROB: We just want to play as much as we can and get the vinyl out.

Last words?
ROB: Thanks Mickey
SCOTT: Everyone says it's hard to be positive when everyone else is negative. Well, let me tell you something: It's easy if you're taking it day by day.

ROB: What does that mean?
SCOTT: I don't know. But it's true.
ROB : Wait. Say that again.
SCOTT: It's true. Think about it. Everyone says it's hard to be positive when everyone else is negative. But, if you're taking it day by day, you don't have to worry about it. Think about it. People are always saying "Oh, I can't be sober for the rest of my life!" That's BS. It's not the rest of your life. Ain't nothing the rest of your life. If it's just today, then it's just today. 'Oh, I can't face it tomorrow. It's today. It's today you've got to face. So, you keep it today. And you don't have to worry about anybody, especially scumbag Communists who try to make fun of our songs that they don't understand. (laughter)
ROB: The final comment is that anyone who accused us of being anything but nice people to people who are cool, they can, uh, uh, go to Naples! Newtown Skins! See ya, Mickey.