YOUTH OF TODAY is probably the biggest band in the new wave of straight-edge bands. They have a new album out. "Break Down The Walls" (Wishingwell Records) on which they come out sounding incredible. We had a chance to speak with their very talented and very nice singer Ray of Today. Here's the interview:

Who formed YOUTH OF TODAY and when?
John and I did in May, 1985.
What's your line-up and what are their ages?
Mike's our drummer, and he's 19. Our new bassist is Walter, and he's from WARZONE.
I heard Craig went to STRAIGHT AHEAD.
Yes. Craig went to STRAIGHT AHEAD. He wanted to rejoin but we wouldn't let him. We already have Walter. He's 18, I think. I'm 21. Richie (guitar) is 21 and (John) Porcell (guitar) is 20.

Why did you first form YOUTH OF TODAY?
We were into hardcore for a long time and we were into punk... we just started moving in a certain direction. You know, once you've been m tne scene for a while, you start to realize what your different direction is. We had very similar ones, so we formed a band to speak our minds and play together.

What bands influence you lyrically? Musically?
LyricalIy, to me personally, it's 7 SECONDS, YOUTH BRIGADE, you know, peace bands like the band LOVE from the 60's. Musically, I'd say N.Y. hardcore.
Like who?
I like THE ABUSED, ANECDOTE, AGNOSTIC FRONT... 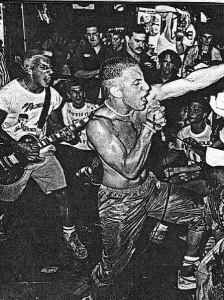 What previous bands were you in?
RAY: I was in REFLEX FROM PAIN and VIOLENT CHILDREN. John was in a band called YOUNG REPUBLICANS.

Has your style changed since you started?
No.

How did you get signed to Wishingwell Records?
The first time we ever played in California, we played with UNIFORM CHOICE. Those guys liked us a lot, and they wanted to put out our record. (Wishingwell is run by Pat Dubar and Pat Longrie of UC) At that time, we were on Positive Force. But they kept on asking me and asking me. Finally, we didn't want to stay on Positive Force. They kept on calling me, so we left with them.

Do you think it was a wise decision? I think it is a good label.
Yeah, I agree - it's a great label.

Are you satisfied with your new album "Break Down The Walls"? What would you change?
I wouldn't change anything. I like how it came out, except for the snare drum sound. I'm pretty much pleased with it all.

Is your new LP an improvement over your Positive Force EP "Can't Close My Eyes"?
Not that vast. I love the single personally. The LP has a lot better production, but it has nothing to do with they way we executed the songs.

How come Drew from BOLD played drums for you?
Because we didn't have a drummer. At the time we kicked out on the tour, we got Drew to finish the tour for us, because he knew all the songs.
The tour last year?
Yeah, we did a tour of the East Coast last summer, and we got Drew to finish the tour with us, and we asked him to record with us, because we never got a drummer. And now Mike's our permanent drummer.

Who write the music and the lyrics?
I write the lyrics and I wrote about 80% of the music. And Porcell wrote all of the stuff on the single.

What message do you try to convey in your music?
A lot of different things. Overall, I'd day live life. Have a great time in life - just don't do it at anyone's or anything's expense. 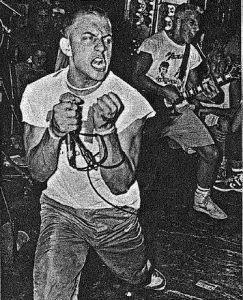 You're all straight-edge. Is it because of bad experiences with drugs and alcohol that you became straight-edge, or were you never really into that stuff?
I don't know. I got into punk rock and stuff like that because I didn't like what was going on with all the kids at my school. So when I turned away from LED ZEP and AC/DC, I also turned away from the typical stuff like hanging out at McDonald's and partying. I wanted to get away from that whole type of mentality. But I never was into it that much.

Are you active politically?
No.
Do you believe in anarchy?
I don't believe it could work. Well, it couldn't work peacefully. I know too many people who would mess with it.

What are the best cities you've played in? What cities have given you the best response?
NYC, of course. L.A. is really good.
When were you out there?
We were out there twice. February of this year and January the year before that.
What cities do you enjoy?
Detroit... Connecticut was always good.. Virginia Beach.

What do you consider a good show?
Basically, the crowd being into it. We've played in Virginia Beach and it wasn't crowded at all, but the kids were into it.
Do you feel a better show would be where everybody knows your music, or do you like playing for new kids?
Both. But at CBGBs in NY, the kids who come to see us are really into us. It's like everyone in the whole place is up front singing along.

What do you think of the "crossover" phase that has hit the scene?
It's helping the number of people at shows and the number of record sales. I don't know, in my eyes, heavy metal has killed the pit. Ha! Ha!
I mean, NY seems to have become very crossover, with new AGNOSTIC FRONT, CRUMBSUCKERS, etc...
There's a lot more to NY hardcore than "Cause for Alarm" and the CRUMBSUCKERS album. There's a lot more bands out there that aren't crossover at all.
They don't seem to be as popular.
They're popular in NY. I'll tell you, a lot fo the big bands on Combat, they don't seem to be as popular to me. They may seem popular to heavy metal kids and a lot of poseur kids, but not to the kids that come to the shows every week. NY right now is very strong. There are a lot of new bands that are really good. There's a strong following too. Don't let it fool you when you see someone with a CRUMBSUCKERS sticker on their jacket.

Do you guys get along with each other?
We all get along great. We're all really good friends with each other.
Then how come you have had some many problems with the line-up?
Well, right now the line-up is pretty sturdy.
Do you think this will last for a while?
I think so. For the longest time we were trying to find someone to fit the feeling we all had. If they didn't fit, they left.

Is the band the most important thing to you? Or is it work or school?
None of us are going to school right now and we just work for fun. We all work in a nightclub and mess around.
Do any of you live with your parents?
None of us... wait... Walter still lives with his parents and Mike still lives with his parents.
Do the rest of your live with each other?
I live with about 11 other people in a lower East side apartment. But Porcell and Richie live together.

What do you think of Chris Williamson?
He's a businessman.
Does that have a place in hardcore?
Whenever money changes hands, it's a business. People come to shows, pay to get in - that's a business. He's just doing it on a bigger, more business-like level.
You think it's OK then?
I'm not going to agree or disagree with him. There have been people who have done much worse. He's just a businessman - just like every other businessman in NY - you know, making money off of other people is messed up, but that's the system we live in. I mean, even at CBGB's where it's five bucks, people are still making money, or else they wouldn't have shows. If people didn't make money, they wouldn't do anything.

How successful would you like to become? Would you ever sign to a major label?
It depends. Not if they would take away certain rights that would hinder our... uh, I don't know. Not if we were being pushed into things that we didn't want to do. It depends on what type of deal it was. It all depends. I can't tell right now because I can't tell where the hardcore scene is going.

What about a tour?
We're supposedly leaving July 1st. We're going to meet with UNIFORM CHOICE, 7 SECONDS, and JUSTICE LEAGUE.
Is it a national tour?
Yeah. It just turns out that all four bands are touring at the same time.
So you decided to get together?
Well, not for every show, but for a lot of shows.

What about your future plans?
I don't know right now.

Any last words?
Ok, new bands that I like from NY: SIDE BY SIDE, GORILLA BISCUITS, WARZONE, SICK OF IT ALL, and ALTERCATION.

Make sure you buy YOUTH OF TODAY's new album and be sure to see them live. They're absolutely incredible. Period.