This summer has seen great for Philly shows. Touring bands have been playing frequently since June, kids are starting to take the initiative to put on their own shows, and outlying suburbs are having shows, showing that they are no longer dependent on Philly.

This show was the best of the summer, though. Great bands, a great crowd, great fun. 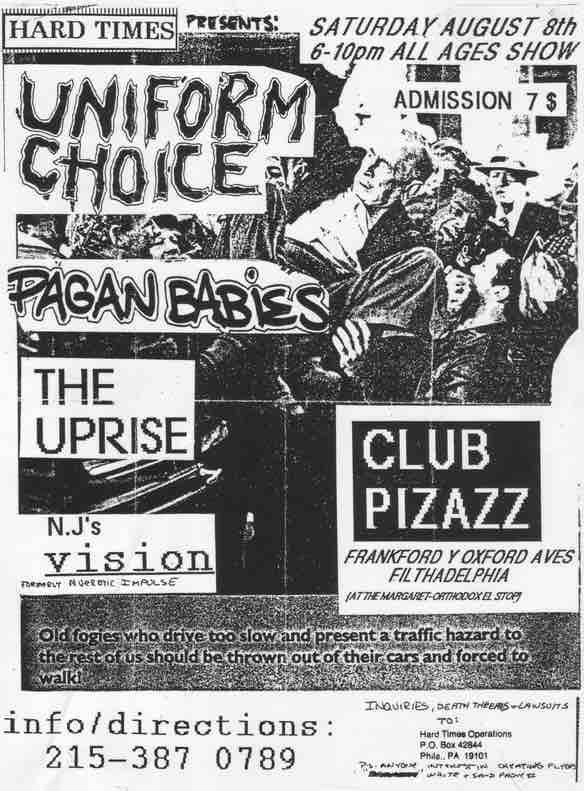 Opening was a band from New Jersey called VISION (formally NEUROTIC IMPULSE). Medium to slower punk was the bill of fare, not really of interest to the majority of the crowd. Their music's pretty good, if not a little imitative (of mainly D.C. bands). They remind me of a miniature DAG NASTY. But their singer should try to sing. It would sound better than his shouting. It seemed pushed, and got a little monotonous. But I really had no major criticisms. A good opening band, with great potential.

THE UPRISE rock, pure and simple. It's not that their music is intricate and all. Far from it. But something seems to click for me. Though I noticed a little lack of enthusiasm. I liked then live -- just loosen up, dudes. You got the music part down pat. Nail the live part, and you'll go very far.

LEGITIMATE REASON made a special guest appearance, highlighting their new singer, Claine, and two new songs. Although they had only one of their guitarists, they sounded as I expected they wouid - awesome. They really seem to know where they're going, dropping all imitative styles of other bands. Keep an eye peeled for their four song EP. which should be out soon on Plus Records.

PAGAN BABIES are a killer live band. Their EP's great, but their live performance is their definite high point. Fresh from their tour, which included New York and D.C., they seemed anxious to play for their hometown homies, and went all out to bring down the ceiling. They played songs off of their EP and newer tunes so incredibly energetically, that the music took a back seat to their flying around the stage and to the crowd response. The highlight had to be when during one song, the stage was packed with people from the pit dancing the "wop". A sight to be seen.

UNIFORM CHOICE has been on their tour for a while before they hit Philly. Hence, I expected a half-hearted, second-rate performance by four road tired dudes. I was pleasantly surprised! Their live show is incredible (I think they're old 7 SECONDS reincarnated). The crowd response was great, enthusiastically singing along to their old tunes, and patiently listening to their new ones. It's hard to say how their new LP will sound. But one thing's for sure - no power will be lost, judging by the way they played the new songs tonight! UNIFORM CHOICE ended a great show with an incredible performance. without a doubt, everyone went home pleased and contented.