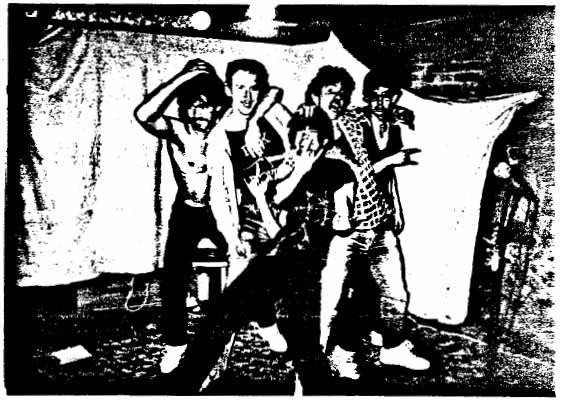 THUNDER’S WRATH is an exciting young thrash band in the Philly scene. They have great talent and potential, and have been showing people their power at local shows. Sean had a chance to talk to the dudes from THUNDER’S WRATH at a party after a recent show.

How long has the band been together? How did it first form?
JOE: About 6 months ago we got together because we all knew each other from school. Mike M. and Scott played together before that.

Is this the first band for all of you?
JOE: Mike, our drummer, sat in for SNEAK ATTACK in Atlantic City. I was playing some guitar for PEER PRESHURE. Scott, Sei, and Mike jammed a lot.

How did you get the name THUNDER’S WRATH?
JOE: Scott thought of it and we all like it, except Sei. Sei wanted us to be called Lucifer’s Hammer or Divine Right.

What messages do you try to give in your songs?
JOE: There aren’t any underlying messages or concepts. Any massage worth putting forth is worth asking obvious. There is no guessing going on. Each song is different from the others.

What is the song “Eternal Damnation” about?
JOE: It’s about the evil in the hearts of men. Me and Mike M. wrote the words and we all worked on putting it together. The idea is that evil does not come from Satan or demons.
MIKE M.: We’re not Satanists.
SCOTT: A couple of us go to church.
JOE: And we don’t do drugs…
SAI: Who doesn’t do drugs?
ALL: Yeaaaah….

How did you decide which covers to do when performing?
JOE: We did some MAIDEN cause when we first got together, we already knew it. Just because songs don’t complain about society doesn’t mean they aren’t good.
SAI: We play what’s good and what we like.

Do you find that there is enough support for young bands?
JOE: There is a flood of younger bands getting shows at places like the Philly Cookbook. This gives them the opportunity to open for older bands like ANVIL BITCH.

Where does the financial backing come from?
JOE: The MAC machine. Right now we pay expenses ourselves.

Do you guys have a lot of musical and personal differences?
JOE: Since Mike M. and Scott write all the music, they argue about the originals. They have different ideas about how fast or complicated our songs should be. But since we all hang together in a very close circle of friends, we are pretty such united.

Who writes your lyrics? What influences it?
JOE: Scott and I write the lyrics. We’re basically influenced by famous poets like SLAYER and EXODUS. We are all inspired by what we see and feel.

How do you feel about the Philly scene?
SAI: It’s cool!
SCOTT: There’s really not too much of a scene.
JOE: There are a lot of good local hardcore bands like RUIN and EAB. Best of luck to ANVIL BITCH.

Do you plan to record a demo?
JOE: When we get enough originals, we’ll try and put out a 4 or 8 track demo. Right now we are only interested in getting our tunes down tighter. We need work. As soon as you think you don’t need work, you’re dead.

What kind of future do you see for THUNDER’S WRATH?
SCOTT: Stardom ending in tragedy.
MIKE W.: If we stopped messing around, we could be great.
SAI: There will be a mini-series on it someday.

Anything else?
JOE: We’d like to thank Mickey, Tony, and Sean for this interview, the SOUTH LAWN, Holly for letting us practice, everybody’s parents, our female fan club, and all of our future fans in the Philly thrash scene. Support the scene. Hear the fatal roar!

THUNDER’S WRATH is a band to keep your eye on in the near future. In the meantime, check out their shows, ’cause they rip live.