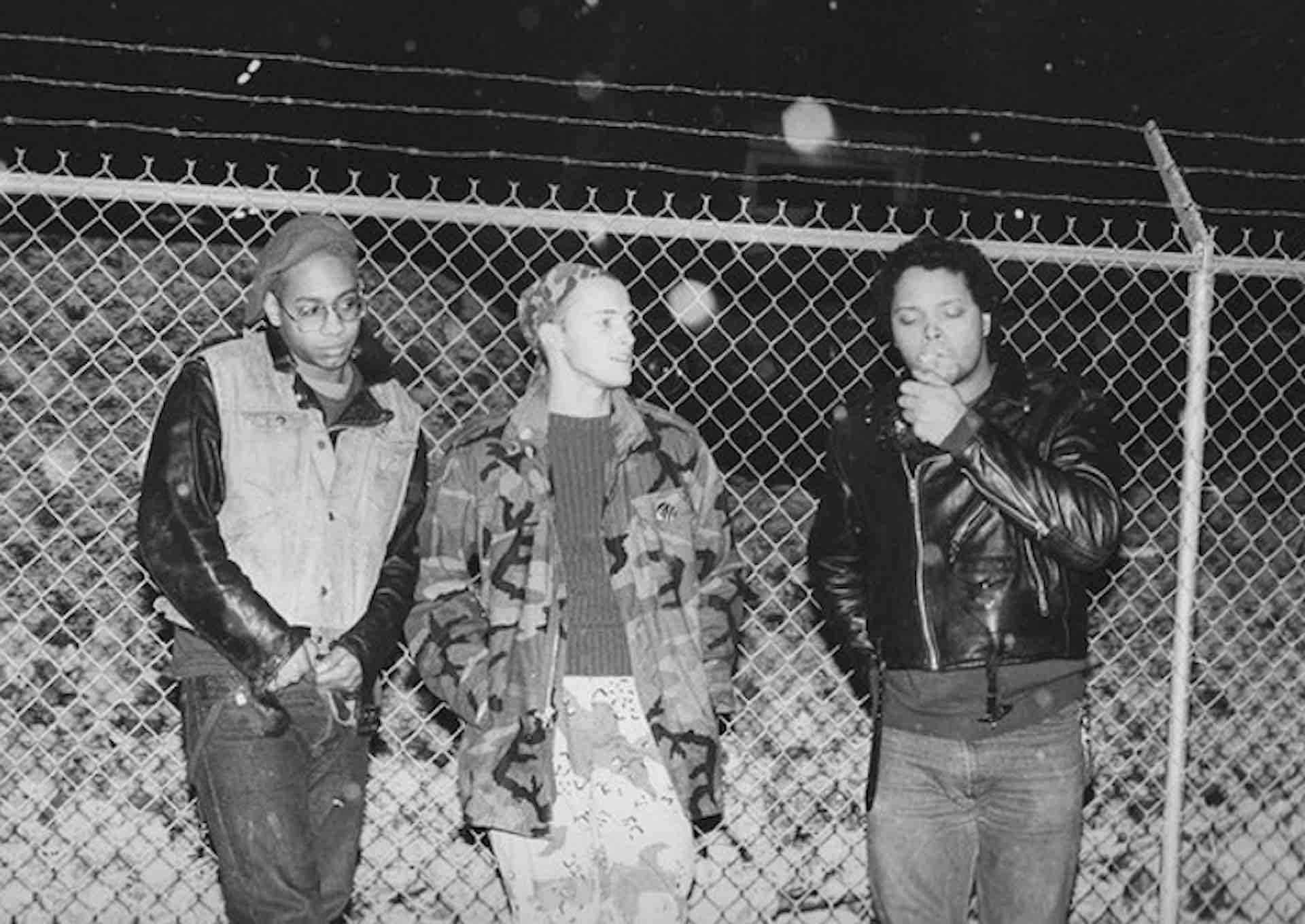 With the release of their album "Days of Grey" in July of 1987, HOMO PICNIC is making a serious attempt to break into the national Music scene. This Philly trio hopes that their album will help them accomplish that goal by allowing them to reach a larger, broader audience. The following interview was done with their drummer, Tony Tigre.

How did HOMO PICNIC come to be?
TONY TIGRE: HOMO PICNIC was formed in 1984 when Doug, Tony and ex-singer Rich Poor quit KREMLIN KORPS to start something more musically diverse. Since then, our original bass player left us to travel Europe, and all of a sudden there was this big, fat, old black dude who was a wicked bassist, and he just kind of slipped into the vacant spot. We ejected Rich Poor in 1985 and since then we have this happy threesome. We have an album out, and we appeared on a 7" international compilation from Germany. Also, many tapes. So many, we don't even know.

What previous bands were you in?
KREMLIN KORPS. DOUG: KREMLIN KORPS, FAT HOWARD'S ARMY, RICH AND THE POOR. KEFKE: SUDDEN IMPACT, SPECIAL ED AND THE DROPOUTS, and THE ALTERBOYS.

Why the name HOMO PICNIC?
Hell, HOMO PICNIC started as somewhat of a joke. One day, we were sitting around thinking of a name, and Rich said "What about HOMO PICNIC? And we all said "Noooooo! and laughed about it, but the name stuck. Since then, we've had many reactions to it, mostly just laughing, but no one has been very negative. Once we played in Kalamazoo, and they didn't want to bill us as HOMO PICNIC because they were afraid the local gay and lesbian group might have thrown a fit. And it's funny. A name like HOMO PICNIC allows you to be a lot more sexist, and no one says a thing about it. I guess it proves we could still be men and play in a band called HOMO PICNIC.

How long have you been playing your instruments?
I've been playing for four years. Doug, for five years. And Beebe, more than ten years.

Who writes your music and lyrics?
Doug and I write all the lyrics and usually sing the lyrics we write. All three of us work on the music together, though Doug and I do most of that as well.

What bands influence your sound?
That's a pretty good question. We don't like to say we sound like anyone. We want to be rough and loud, and not too fast, because it takes away a lot of the melody of songs. We think that melody is very important, and a lot of hardcore music lacks it.

Who do you listen to?
Almost all reggae, some BAD BRAINS, and METALLICA. Doug, MOTORHEAD and other loud stuff. Beebe, well, you know. Whatever. YDI, Power 99 FM.....

Are you satisfied with your LP, "Days of Grey?
Whenever you first hear something you've recorded, you think it's the greatest sounding thing in the world. However, after a while, you start noticing some little flaws, or things you would have done differently. But, on the whole, we are very satisfied with the way it sounds. We might want to change one or two things, mainly because we were on a limited budget and had to rush somewhat, but I couldn't really pinpoint anything specific.

Tell us what some of your songs are about.
"Struggle For Life" is about the situation when people are down and out, with lots of problems (financial and emotional), and they are stuck in this rut in which there seems to be no escape. But the song just tries to say that if you try hard enough, you can overcome almost anything. Life might try to crush you, but what is more important than life itself? If you have that, you can always start over, no matter how hard it might be.

I wrote "Another Day about a female friend of mine who was totally in love with this guy for so she thought) and the guy turned around and broke up with her. And I've seen this happen so many times and the girls get S0 depressed. But, in reality, life goes on. You're young, and you have to take chances.

Doug wrote *The Book" about people getting old. If you just sit around and let your life pass you by, one day you'll realize that you're old - too old to enjoy life to the wax, and you've wasted your life away. And then you'll wish you had lived it up years ago. "Two Eyes" is about something similar: wasting your life away in front of the T.V. The T.V. is way too important in the U.S., and all it really does is fill your life with emptiness.

Where do you practice? Do the neighbors complain?
We practice at 43rd and Baltimore (in Philly) in a house (literally) filled with homos. We just started there and the neighbors haven't complained yet, which is cool, because we practice pretty loudly. However, at our last practice, a cop walked right into the basement where we practice and said that all the doors were open and we were rattling the floors two doors down. But he was cool about it.

Besides drinking, what do you do in your spare time?
Drink some more.

Do you work?
Doug goes to school, and Beebe and I work. It's none of your business where! (Just kidding. It's just not important.) 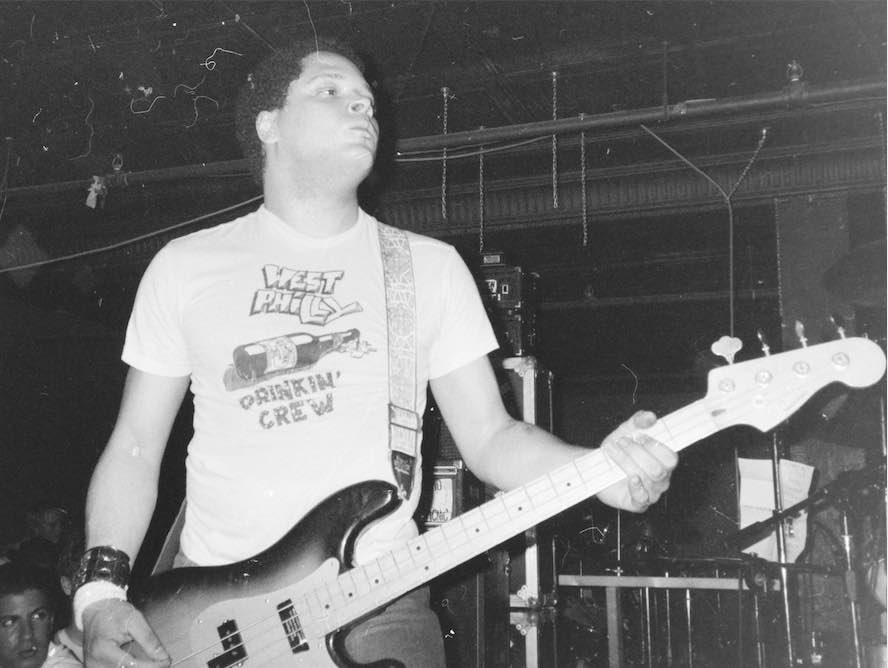 What do you think of the Philly scene? Has it gotten better or worse since you've been in it?
You know, this question has been asked to us many different times, and we each feel differently about it. Doug and Beebe like it pretty much, but we all feel there is something lacking. The worst thing is probably that the kids get into it, and then get out in a few months, and you don't really get a chance to know them, especially if you don't go to shows too often, like me. You just hang out with your old buddies and the younger kids look down on you because you look normal.

Your lyrics are definitely non - political. Are you active politically?
We're not really active politically. I personally have strong feelings about politics, but I can't do anything about it since l's not an American citizen. Doug and Beebe vote, and we do not really exclude politics from our songs. We just express it in a concealed kind of way.

Where have you played?
We played shows from Baltimore, MD, to Kalamazoo, MI, and Pittsburgh, PA, to Atlantic City, NJ. We've played with bands like G.I., MARGINAL MAN, C.O.C., 7 SECONDS, TOXIC REASONS, and many others.

What do you think of crossover?
I think Doug and Beebe like it O.K. I personally don't think it's O.K. It creates a lot of bad new bands on both the punk and metal side under the guise of crossover. I'm biased because I'm not into speedmetal and not that such into hardcore thrash, and now you have an excuse who can't play either to pretend they play something which is neither. As for bands who can play, like C.O.C. and D.R.I., I think they would be more popular if they played somewhat slower. Their slow songs kill. The movement as whole is a good thing, though. It tends to unite hardcore and metalheads, and creates a larger, more unified scene, and a larger market for the bands. Bigger audiences make better shows, and us bands love it.

What merchandise do you have available?
Of course, we have our "Days of Grey" album available, at your local record store. We also intend to make up more t-shirts in the near future, and if you want them, look for us at our shows, or write to us.

Last words?
You know, I hate this question. People always ask about it, and there are so many things you could say. Serious things, funny things, good things, bad things, nasty things, nice things. You get the idea. Just don't be too serious about anything you do. Try to see the humor of things, and life will look a lot brighter.