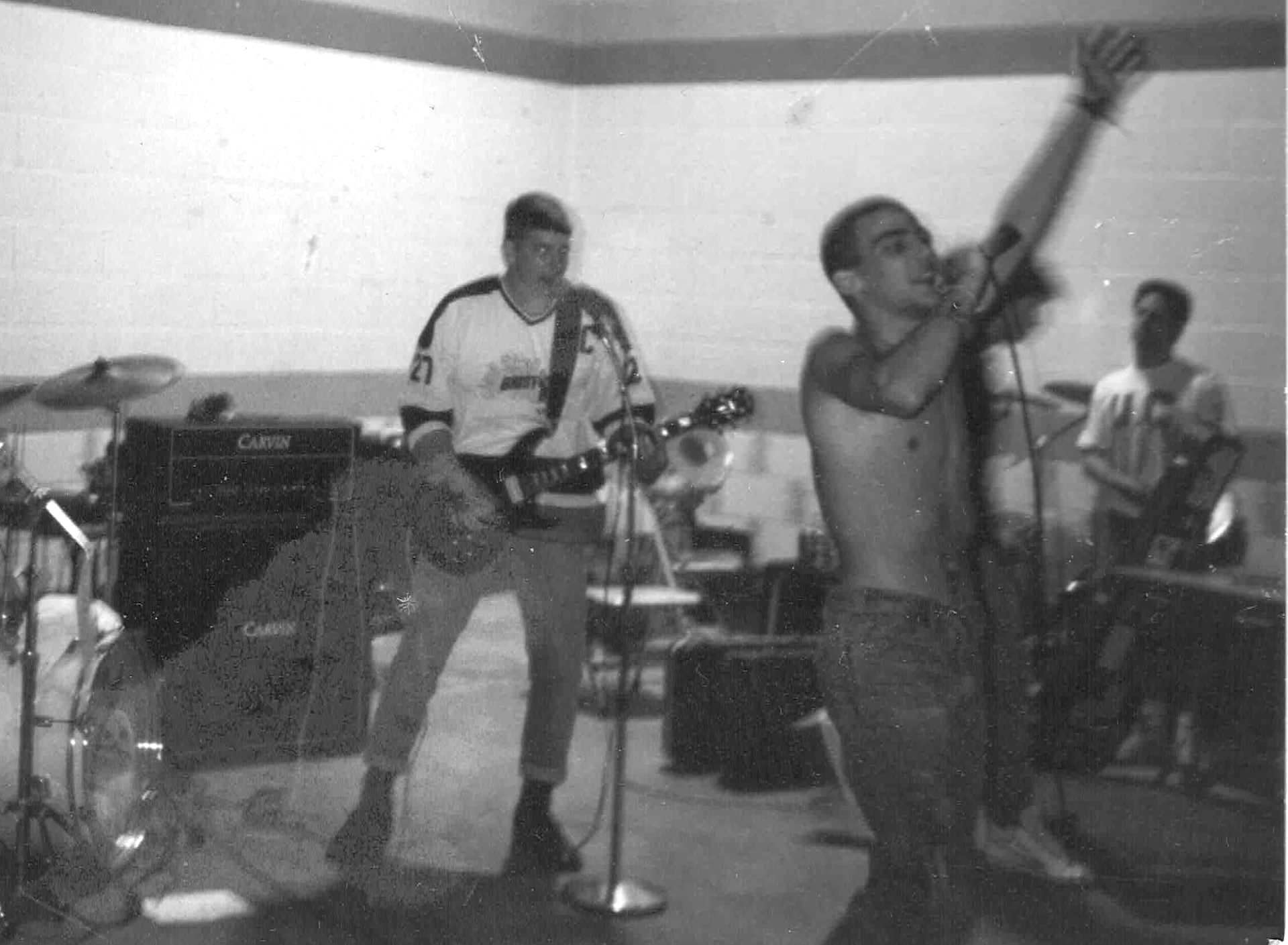 THE CORRUPTED ONES is an incredible band from South Jersey. They’ve played several shows and parties in the area and released a 15-track demo. This interview was conducted in the parking lot of the Frankford YMCA after another intense performance by this talented young band. (Unfortunately, we didn’t have any questions prepared, so we made them up as we went along.)

THREATENING SOCIETY: From reading your lyrics and looking at some of your art, we have to ask, are you a straight-edge band?

DWAYNE: Trying to make people think and use their head.

DAVE: And to make them decide for themselves what they want to do. 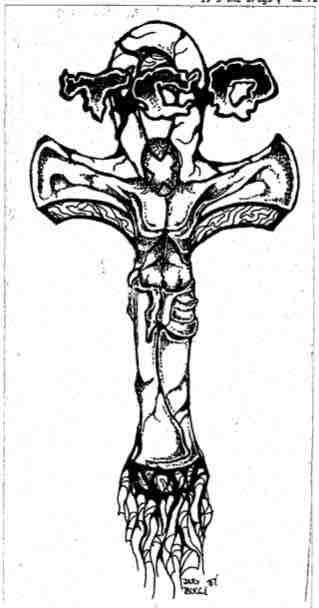 TS: How long has T.C.O. been together?

TS: When was your first show?

TS: Why is it that you’ve only started playing out recently?

DAVE: Development time. We were really young and we weren’t that good.

TS: You guys did some new songs tonight. Will they be on the next demo?

DOUG: Hopefully it won’t be a demo.

TS: Have any record labels contacted you?

TS: So what do you think of this new place (the Frankford Y in Northeast Philadelphia)?

DOUG: It’s nice. They need a new PR though.

DAVE: It’s cool, just as long as somebody’s having shows, it doesn’t matter where they are.

TS: Do you guys play for just gas money?

DWAYNE: We like to get as much money as we can. (Laughter) But that’s not what it sounds like. We don’t play for the money, we play because we enjoy it.

DAVE: We want to have some money so, if we don’t get signed, we can release a record on our own and we want to get t-shirts made. And money for gas.

TS: Were there any problems in the pit tonight?

DWAYNE: Not today. At the MURPHY’S LAW show a long time ago, that was bad.

DOUG: I think everyone’s so worried about shows going on that they don’t want to start trouble.

TS: Did you think today’s crowd was better than usual? I mean, it’s like the people came out to see 5 local bands because they’re into the scene, instead of those who just go to see the “big” bands.

DAVE: Yeah, there were more people who were really into the scene.

DWAYNE: At Pizazz, people started to take the shows for granted.

TS: Is your response always this good?

DWAYNE: Normally. I don’t want to be big-headed or anything, but we normally get a pretty good response. 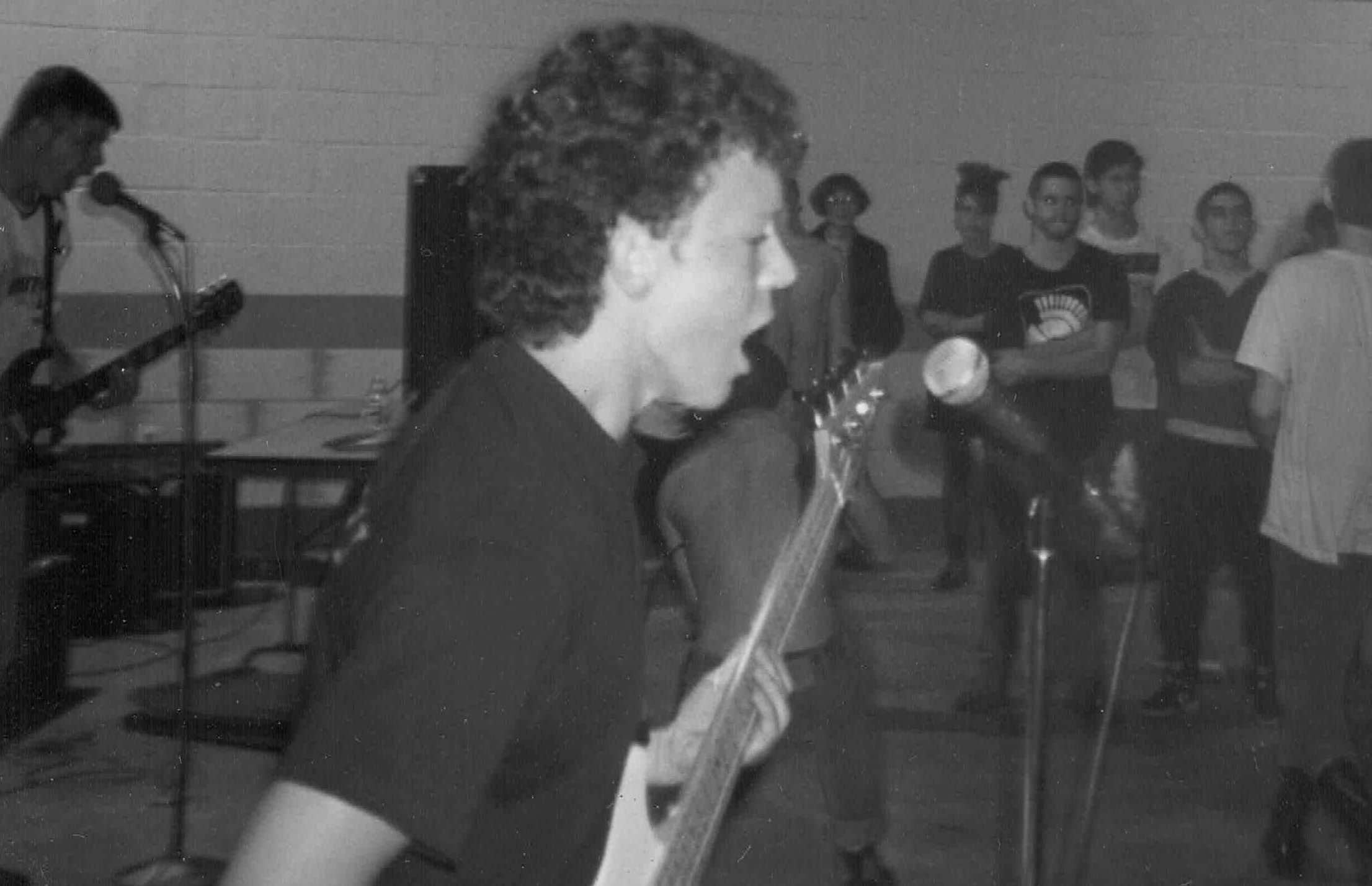 TS: Do you bring out a lot people from your area?

DWAYNE: Not really, because in our area, not too many people know who we are.

DAVE: Today there were a lot of people who haven’t seen us before…

DOUG: …which is good.

TS: Who writes the music?

DAVE: Dwayne and I write the music and Doug writes the lyrics.

DWAYNE: Our drummer contributes too. He’ll say “Do this (humming) da dah dah da dah.” (Laughter) But lately the music’s been getting better and better. Before it was just four chord progressions, now we’re getting more creative. We’re getting way from the basic fast part – slow part – fast part thing. [The discussion turns to what bands would be featured in the next issue of Threatening Society. DAG NASTY’s recent Trenton show is mentioned, leading to the following:]

TS: Do you guys go to City Gardens at all?

TS: Do you boycott them or you just don’t go?

DWAYNE: Well, we’ve been there. I don’t like the way they put the bands up at a much higher level than the audience.

DAVE: You can’t touch the stage.

DWAYNE: You can’t even see the drummer; you have to pay ten dollars. They treat bands like they’re some kind of gods or something. Bands are humans too. 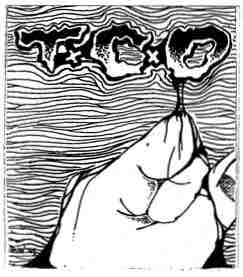 TS: Yeah, and they have a little room for the bands so they don’t have to “mingle.”

TS: When you guys play a show, would you rather that everyone just danced and had a good time, or would you like them to hear something in a song that made them think or left a lasting impression?

DWAYNE: We like to see the crowd have fun and get into it. But we also want them to leave with a positive note.

TS: What’s in the future of T.C.O.? Where do you want to take it?
DOUG: Bigger than the Beatles! (Laughter)

TS: Do you want the band to be just a hobby, or would you want to support yourselves off it?

DWAYNE: Definitely. I love the band. It’s what I want to do for the rest of my life.

TS: Well, would you still want to play low-priced all-ages shows if you had the opportunity to play the bigger venues?

DWAYNE: The coolest is when it’s a show in a basement with pipes in the ceiling – that’s what we love. But, we wouldn’t mind making money.

DAVE: Unless we had to change our style.

TS: What do you try to accomplish with your lyrics?

DOUG: It’s hard to make a full change. We’re trying to get our point across. Like in “Understand You” and “It’s the Drugs”, we’re trying to make people realize that you have to use your head. You can’t just rely on drugs to solve your problems because in the end, the problems will still be there and they’ll be worse.

DWAYNE: Not just drugs though…

DAVE: Negativity. There are too many negative people. It’s like “Oh, he’s a skinhead, I don’t like him.” That’s no good.

DWAYNE: I don’t like it when people judge by appearance or put labels on people.

TS: You probably get a lot of that in your area.

DAVE: Yeah, it’s like when my friends got their hair cut real short and they were at this auto shop and there were a couple of black guys who thought we were skinheads who hated them. They thought this way because of what they saw on Oprah Winfrey.

DOUG: The cops give us a lot of trouble. 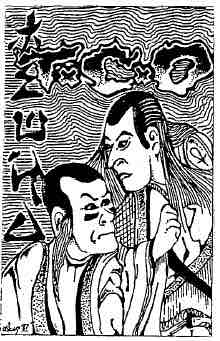 DWAYNE: I don’t get any trouble because I guess I look “normal.”

DOUG: Plus, his father’s a cop. (Laughter)

DWAYNE: It’s true, but he’s not a facist, though. Anyway, when I joined the band, the first thing I did was get a mohawk, started wearing combat boots and all that bullshit. And then I realized that that’s not where it’s at. It’s in your heart. It’s not the clothes you wear.

DAVE: If you’re just wearing combat boots, hardcore t-shirts and punk haircuts just because you’re going to shows… I mean, I’ve word combat boots every single day for the past six or seven months. That’s just what I like to do.

DWAYNE: I hate it when people get dressed up just to go to shows.

TS: Yeah, we thought maybe they should put up a little runway next to the stage so they could have a fashion show for all the dress-ups. (Laughter) Do they give you problems at school?

DOUG: They label us. They accuse us.

DOUG: No you didn’t.

DWAYNE: Yes I did.

DOUG: We both did.

DWAYNE: (sarcastically) Yeah, we were at practice and we were trying to find a name and simultaneously we both said “THE CORRUPTED ONES”. (Laughter)

TS: Does it have any special meaning?

DWAYNE: It’s kind of sarcastic. It’s like adults look at us and think we’re corrupted.

DWAYNE: We ain’t bad or nothing. Eric’s corrupt.

TS: That must be why he’s been so quiet. He knows he’s guilty. (Laughter). Any last words of wisdom? Let’s start with you, Eric, since you’ve been so quiet.

ERIC: I don’t have anything to say. (Laughter)

DOUG: As I said before, respect yourself before you respect others and it’ll take you a long way in life.

DWAYNE: Don’t start taking shows for granted, because that’s when the shows disappear.

TS: Do you think that’s what happened at Club Pizazz?

DWAYNE: I don’t know. Maybe it was that and something about the lease. [Note: The lease did run out at Club Pizazz and the new owners raised the price, but the way the participation and behavior at those shows were declining, it was going to happen anyway. – Ed.]

DOUG: Chuck (Meehan, the promoter at Club Pizazz) is a hard-working man and he’s done a lot of good. One day, hopefully, he can come back and do shows again.

T.C.O.’s fifteen song demo is available for $4 ppd. Also, contact them if you live in the area and are putting on a show and would like them to play, or if you just want more info.