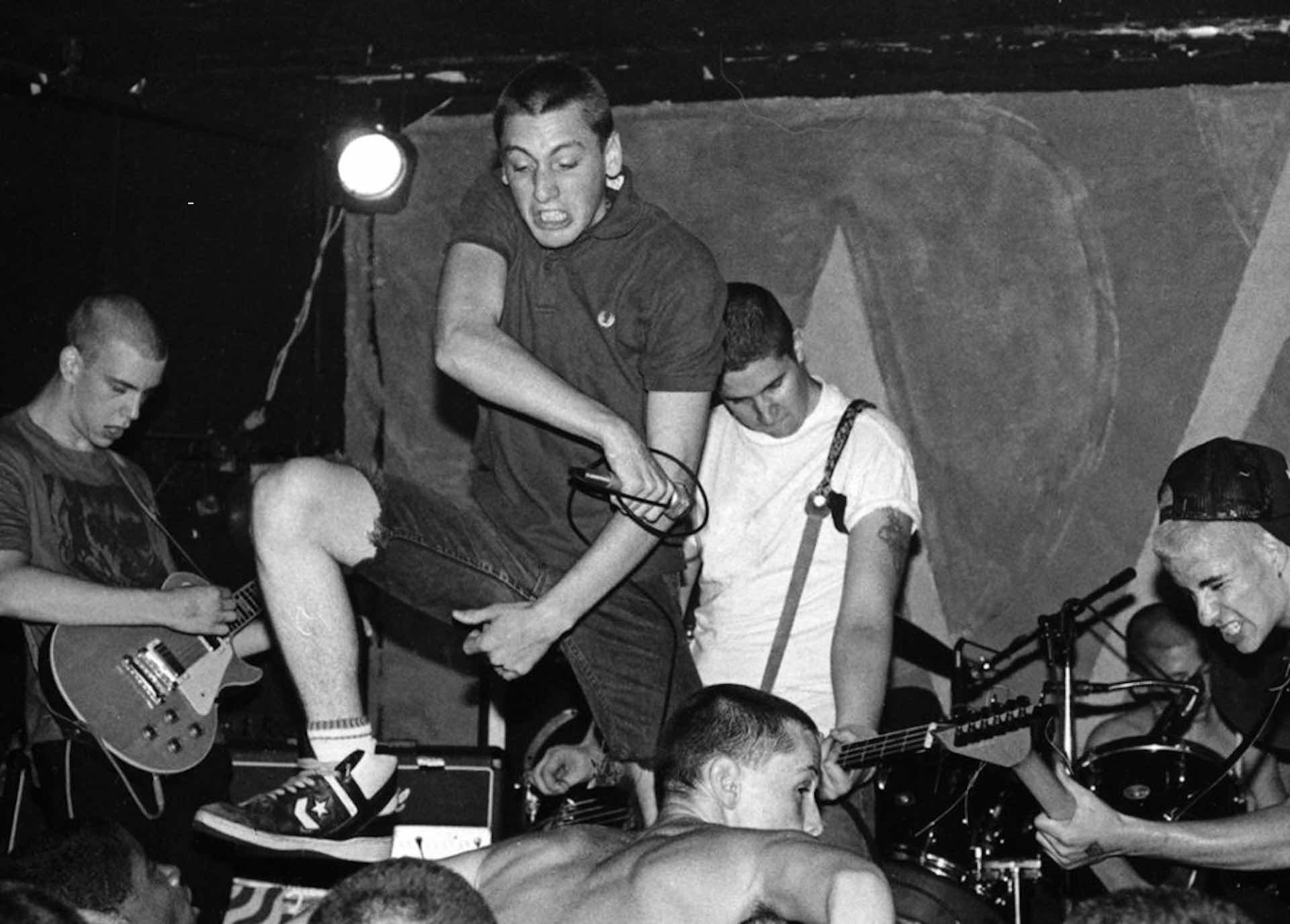 [LOOKING BACK: SIDE BY SIDE were great. A different sound from the various "youth crew" bands kicking in NYC around this time. A youthful exuberance and less macho posturing. (It was probably hard to look too "hard" when your drummer was like 13 years olds -- and looked even younger. ANYWAY, these guys released only one record -- a 7" EP on Revelation -- but are still remembered by many hardcore fans fondly. Alex ran the great fanzine Schism with Porcell from YOUTH OF TODAY (in fact, Schism released a book with all of their issues. Get it!) Sammy Siegler when on to drum for a who's who of NYC punk: YOUTH OF TODAY, PROJECT X, GORILLA BISCUITS, JUDGE, SHELTER, CIV, etc.). This interview was done in the send-a-blank-tape-and-a-list-of-questions-to-the-band-and-they-send-back-recorded-answers interview style. -- Mickey]

SIDE BY SIDE is my (Mickey's) favorite band of the New York hardcore scene. I've only seen them once, and only have one of their songs, but their energy and enthusiasm live blew me away, and judging from their track on the "Together" compilation EP, they definitely have a bright future. It took a while to track them down, but I finally nailed down their contact address. It was worthwhile, to say the least. Here's an interview with Alex, their guitarist, and Jules, their singer. Enjoy. 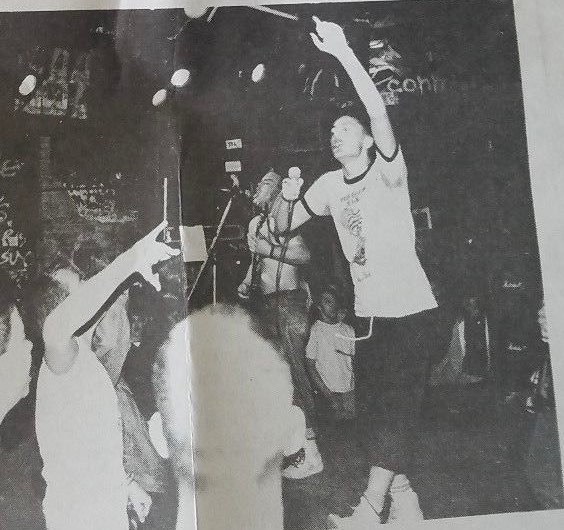 What previous bands have you been in?
JULES: None anybody would know.
ALEX: find none that anyone would admit to having played for! (laughter)
TS: Who writes your music and lyrics?
ALEX: We all kind of do it.
JULES: We all contribute.
ALEX: Everyone contributes, especially on the lyrics. The music is basically done by the guitarists, Eric and me.

Do you like any mainstream bands?
ALEX: Yeah, a lot. I like LED ZEPPELIN. (laughter)
JULES: Since when?
ALEX: Since I was thirteen years old, man! I like AC/DC.
JULES: You're forgetting the big ones!
ALEX: Who?
JULES: U2, man.
ALEX: I like U2. They're cool. I like THE WHO alot.
JULES: Yeah.
ALEX: As far as rap goes, I like ERIC B. PUBLIC ENEMY is hard. SCHOOLY-D is the hardest ever.

Where has SIDE BY SIDE played?
JULES: We played New York a whole mess of times.
ALEX: We played in Pennsylvania (Philadelphia and Lancaster) and we played Connecticut a couple of times.
JULES: That's it, so far!
ALEX: We're playing Rhode Island tomorrow.
JULES: We're hoping to get down South. Especially to Baltimore. Also, we want to play Boston and D.C. We're working on it.

What do you think of the "Together" EP? Did it turn out as well as you had hoped?
ALEX: We got screwed! (laughter)
JULES: It's a great record and all, but I don't really like the way it looks too much, and they kind of messed up our recording real bad when they mastered it. But there's no one to blame. It's some silly engineer somewhere in California, you know, having a beer and mixing our track.
ALEX: It's a cool thing, so support it.

What do you think of the New York scene?
ALEX: It rules! It's the hardest scene.
JULES: It's the best in the world, man! I'm not slighting any of the smaller scenes, but as far as good bands are concerned, I haven't seen this amount come out of one scene since the DC scene in the early 1980's. 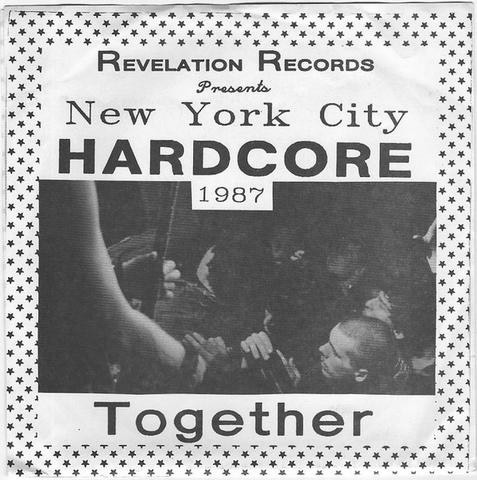 Is your song "Violence to Fade" about violence at shows? Are New York shows violent?
JULES: Well, to answer the first question, "Violence To Fade" is mostly about street violence, when people end up stabbing each other for absolutely no reason. And with the younger skinhead crew, they have something to prove. I remember one time these kids knocked over an old lady and stole her purse and beat up this old man. (sarcastically) That was really great. And there's no place for that in our scene, in our world, you know? About violence at New York shows, it depends on who is in the pit. I mean, I can remember some pretty soft pits, and I remember getting my nose broken in one during UNDERDOG. I don't know. Alex?
ALEX: Yeah, it's pretty crazy. New York shows are crazier than your average shows.

Is the New York scene getting better?
ALEX: I don't know. I've only lived here a year.
JULES: I've been around here all my life. I see a lot more people participating, alot more people getting sick of the other scenes and understanding that this is just better. It's got more to offer than it used to. And people don't have as much to prove anymore. It's more accepting. I don't know if that's good or bad, but I guess it's better. 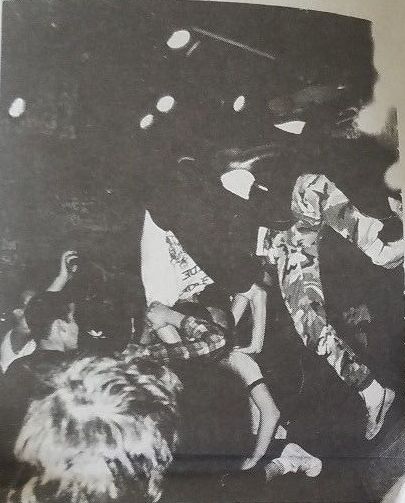 What do you think of Chris Williamson?
JULES: Personally, I don't like him.
ALEX: I don't care, and don't want to talk about Chris. He doesn't deserve our attention.
JULES: He doesn't deserve anything.
ALEX: But we wouldn't mind being on Rock Hotel Records! (laughter)
JULES: No, that's not true. We would mind.

I read that New York bands have "crews" who only go to shows if their band is playing.
JULES: Not really...
ALEX: Well, it's true, in the sense that you'll get a certain crowd for a YOUTH OF TODAY / WARZONE / GORILLA BISCUITS / SIDE BY SIDE show and a different crowd for LETCH PATROL. There are different scenes, but it's pretty much everyone.

JULES: There are these crews, but it's not like these massive groups of two hundred and three hundred people. It's like ten kids who will always go to a certain show. But it's not like no one else shows up either. Crews are like friends, who help the band out. It's nothing like armies or anything.

Are any of you straight-edge?
JULES: Four of us are straight-edge, but one of us is straight but smokes. I don't know if you can count that as anything, but... um ... we're not a straight-edge band per se. We're a hardcore band that believes in getting people together, no matter how they think, and work towards a common goal instead of sectioning people off with labels, like straight or not, or skinhead or not, or Hare Krishna or not, or anything like that. We all have to work together towards something we think is right. It's real difficult. But we're all basically straight-edge.

Any plans for an EP or LP?
ALEX: We have an EP coming out on Revelation Records. If you look, we're going to be sending ads out.
JULES: So look for us soon.

Last words?
ALEX: Hmmm... What last words do we have to say to our fine audience? (laughter) Schism fanzine rules over any other!
JULES: Except THREATENING SOCIETY, of course!

ALEX: OK, come to our show and dance hard to us.
JULES: Yeah, please. And hopefully we'll be playing in your area soon! Anybody who does bookings, please get in touch with us 'cause we'd like to play out. And we can probably bring a lot of good New York bands with us. So keep in touch. 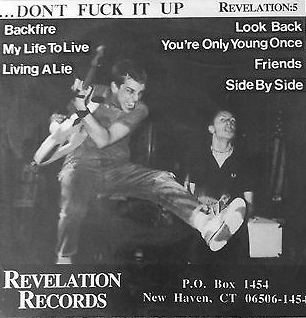 There you have it. So keen an eye out for this HOT New York band. They'll be big soon, I hope.