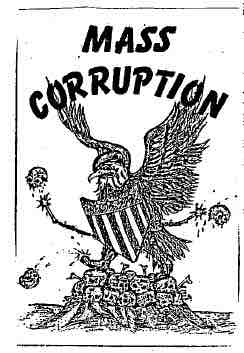 MASS CORRUPTION — ’86 demo tape
“MASS CORRUPTION was formed in late September, 1986. After a few months, we changed drummers. Our line-up now consists of Rick (17) on vocals, Deli (17) on bass, Crash (26) on drums, and Ed (19) on guitar. We have played quite a few bars with local bands. We have not get to open for any out-of-town bands yet, because the only club that bills out-of-town bands thinks we are Nazis. We are NOT Nazis. We are not a peace band. We are not a political band. We are simply a mean, aggressive band that likes to have a good time tearing it up live. Our future plans are to record a demo very soon and try to get a record deal. We also would like to tour the US this summer or the summer afterwards.”

This is a ten track tape of good crossover (burning speed with sick mosh parts), but with a very heavy sound. Some of the tracks remind me of AGNOSTIC FRONT (especially old AF), which made me like them even more. The songs are played tightly, with plenty of good riffing. After a few listens, you’ll really get into it. This should appeal to both metal and ‘core kids alike. Give MASS CORRUPTION a listen — you won’t be disappointed (unless you’re a total waste). [TONY]