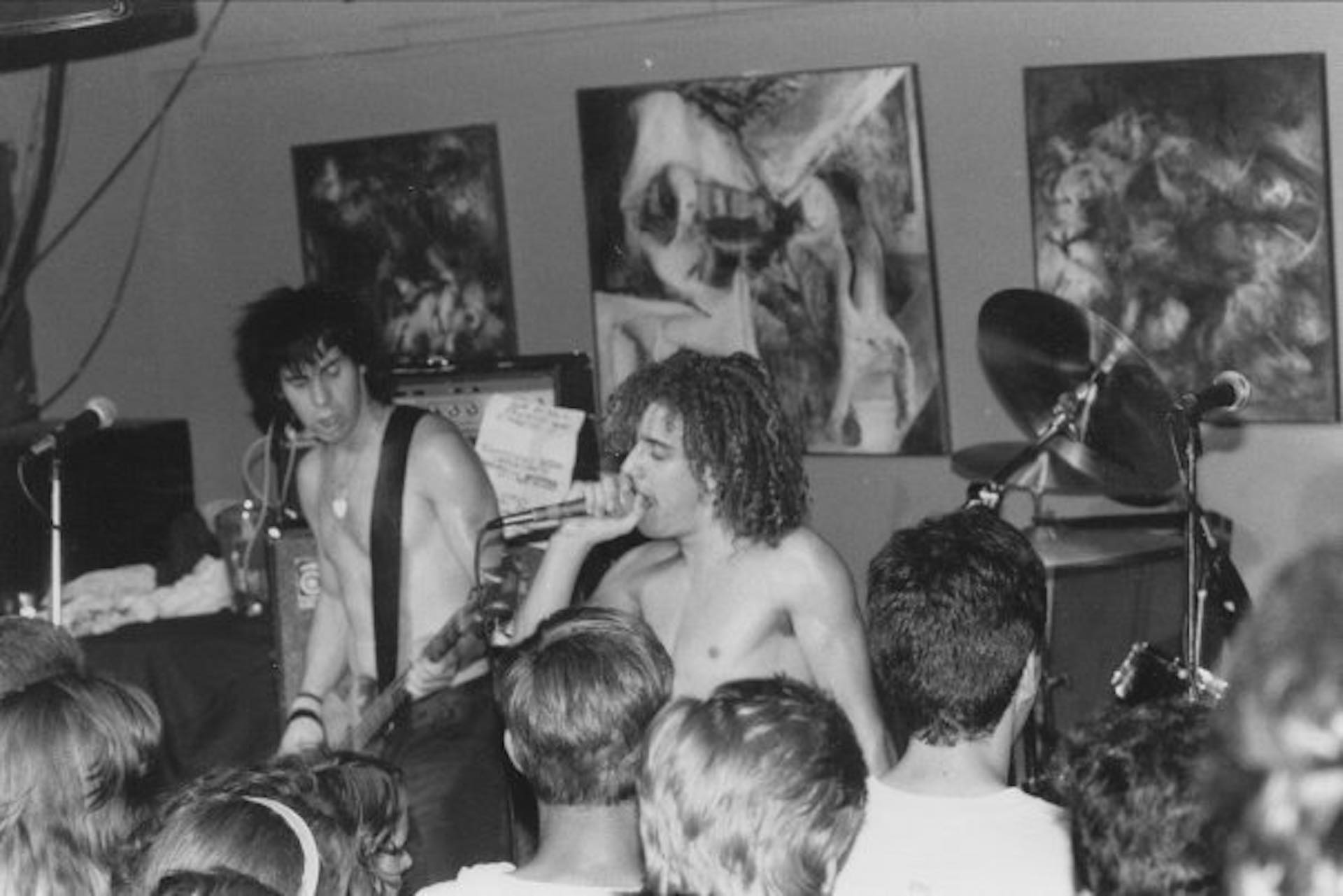 TS: Give us a band history.

MARK: KINGFACE has been around since the summer of 1985. Pat and I have been in it from the word go. Larry and Andy climbed aboard a year or a year and a half after that. We were terrible for a long time. We had different drummers. We had two guitarists for a long time. We had enormous trouble keeping a bass player. It really wasn’t until the four of us hooked up together that things began to click.

TS: How did the name KINGFACE come about? 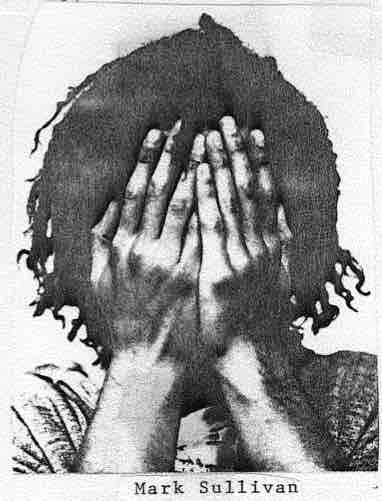 TS: What other bands have you been in?

TS: Your band seems to have a more rock ‘n roll or blues sound to it. Do you consider yourself to be a punk or hardcore band?

MARK: Not at all.

TS: Is the KINGFACE album your first release?

MARK: Well, it’s very old. The recording is a year and a half old. We’re very pleased with it. It’s our first release. But naturally, the songs that are on that tape have undergone a transition. They’re stronger than they used to be. I think that if we were to record these six songs now, you’d find a stronger performance. And naturally, our resources have improved somewhat, so we could sit down and make what I consider a better sounding tape. You can bet that our new tape will sound better, but that’s not because it was improperly produced. Merely, it’s because I feel that we’re improving with age.

TS: Has your sound changed considerably?

MARK: Well, yeah, in the simple consideration that we didn’t have a sound when we started, and now we do. I don’t think I’m blowing my own horn when I say that we don’t sound like a lot of other bands, that we’ve carved out a sound for ourselves. And that was not evident at first at all. No big deal. It takes a while for things to gel. Sometimes they never do. But, yeah, we’ve changed a lot. A lot of personnel changes. We had two guitarists for a while there, and that’s going to change the sound a lot. I think we’re leaner. Leaner and fat at the same time. (Laughter)

TS: The meaning of your songs is an absolute mystery to me. Please tell me what the basic message is that you try to convey in your music.

MARK: I’m uncomfortable talking about my lyrics. I think that they’re most effective when people are allowed to glean their own meaning. I think that we’re all sort of trained by our English classes in high school to think that every piece of writing has a specific meaning. And that’s not the case. When an English teacher says “This is what KEATS meant in his poem…whatever” and then sits down and tells you, you can raise your hand in class and tell him he’s a liar, because how on Earth could they possibly know, unless Keats told them himself, or it’s been handed down by Keats to somebody to somebody to them. I think that when you overanalyze, you crush the joy out of a lot of stuff. That’s not to say that by learning all you can, and by asking questions you’ve asked, and by knowing more about the writer, you don’t gain useful insight into words of poetry or literature or anything. But as a general guide, I would say, in answer to your question, like “Lullabye” is about the way parents can punish their children when they think that they’re helping them and loving them. “Like a King” is about knowing the difference between right and wrong, or, in the context of your life, what’s right or wrong for you. And I think those two themes of self-determination and clarity run rampant throughout my writing. (Laughter) 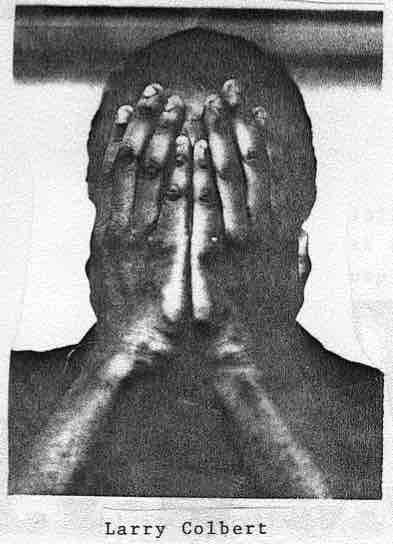 TS: In the credits on the insert it says “have some.” Have some what?

MARK: Have some of the music that’s on the record. If I walked up to you with a plate of hors d’oevres at a cocktail party and said “Have some”, you’d probably dig right in. That was our hope for the record.

TS: What, if any, beliefs does the band hold as a whole?

MARK: We’re not a political band. We don’t have any particular lines that we tour. I am a vegetarian, I don’t drink or do drugs. I used to eat meat, and I used to drink as much as I possibly could. Everybody asks about straight-edge – it’s the question in every interview – and I with people would stop. (That’s not to cut on you.) People think about it, but it really doesn’t matter. I don’t think I was a bad person when I was drinking a lot. I don’t think I’m much of a saint now that I’ve stopped. Everyone finds solutions for their lives as they see fit. You never change people – people only change themselves. I think that’s a good rule to live by. You’ll find four different viewpoints on just about every subject in KINGFACE. 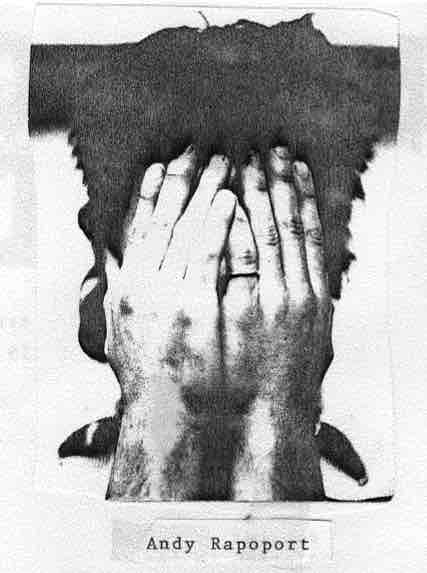 TS: Are you active politically?

MARK: I don’t know. I don’t think politics as they’re practiced in America today apply themselves to the problems that we’re facing. I think that you live your life the best way that you know how, and if you have children, you raise them properly. Problems are not political or economic, but cultural.

TS: I can’t compare your sound to any other band. What type of music influences you?

MARK: We’ve all listened to a lot of stuff over our lives. I don’t think, actually, that musicians should be asked to cite their musical influences because they’ll always say what influences they think would be the coolest to have. It’s really up to anyone who listens to our record or sees us live to figure out where we’re coming from, because the band has such a broad range of musical taste. What we end up is a mix of all we’ve ever heard and thought was good. Also, we try very hard not to imitate. If we came up with a song and decided that it sounded like something, we tend to drop it. Of course, we’re all dealing with rock ‘n roll convention. All of it comes from somewhere.

TS: I know you’ve been in the scene for a while. Do you still go to shows?

MARK: If I like the bands. Once upon a time, between ’79 and ’83, I’d go to a show because I was on the scene, and you had to support the scene, so I went. It was my responsibility to attend. I don’t feel that way anymore. I only go to shows if a band I like is playing. I think that’s fine.

TS: What difference do you see between the early days (’79-’83) and now? How have the kids changed?

MARK: I dunno. That’s a very valid question. I think that the kids who are doing what we did them, now, aren’t into hardcore. You go to a show and see four or five hardcore bands and it seems all very much the same. In ’79 or ’80, here in DC, if I saw another punk rocker, I’d walk up and say “Hi”, because initially, in the early days we were making it up as we went along. We took our cue from the British stuff at first, but the hardcore sound that came out of DC in those days certainly stands on its own. Things now are established. It makes me sad that people feel that they have to slamdance it at shows and stuff – it’s another prescription for behavior dictated by the media, and by people who don’t really care about what’s going on. Also, referring back to the earlier question, we’re not really a punk or hardcore band. We have mainstream ambitions. We play the kind of shows that we do because they’re what we can get and it’s important to us that people see us. I mean, I think all-ages is a healthy concept, one that was brought about by the earlier scene. All the changes between then and now come from the fact that we were making it up as we went along. And now, at least in the hardcore/punk rock scene, it’s been made up, and people are elaborating or following existing themes.

TS: Why, throughout the years, have the best bands come out of DC? (A biased question, I know, but I’m a big DC fan.)

MARK: The best bands haven’t come from DC. There are a lot of good bands out there. Certainly, a lot of bands from DC are great, but there are lousy ones too. I feel that there is a certain amount of healthy competition around here and there’s a marketplace of ideas, if you will. But I don’t think that it’s anything in the water. I don’t think that the people in DC are genetically better tuned for better music. If it seems that way, it just seems that way. It’s not very based on fact.

MARK: Well, again, I imagine that they don’t break up any more or any less than bands anywhere else. It’s difficult keeping bands together. When you share space and ideas with other people, there’s a lot of room for misunderstanding, competition, and therefore, break-up. I think people get frustrated simply because Dischord Records release records by posthumous bands, whereas other labels don’t. Labels that are into dough don’t want a band that’s not going to tour, whereas Dischord is more concerned about getting the music out, and there’s room for both of these ideals in this world as big as the one we got!

TS: Without bad-mouthing any bands in specific, which ones or types really bother you?

MARK: There are about 3 or 4 million shitty bands out there and it would keep you up at night if you let the bad ones bother you. I prefer to focus on individuals – if someone is an asshole, chances are I won’t like their band either. I don’t want to get into specifics, because when you personalize, you create more problems than you solve.

MARK: To ride this thing out as far as it’s going to take us. We’re starting to play our more. We’re meeting cool people, going to cool places. We’re starting to earn enough money where I don’t have to lend the band my money anymore. Maybe we can even make a little, continue to have a good time, and write some good songs.

MARK: Music is a positive energy. Even if you’re using it as catharsis, it means you’re blowing off steam and enabling yourself to deal with the world with a calmer head. There are no rules, and govern yourself accordingly.