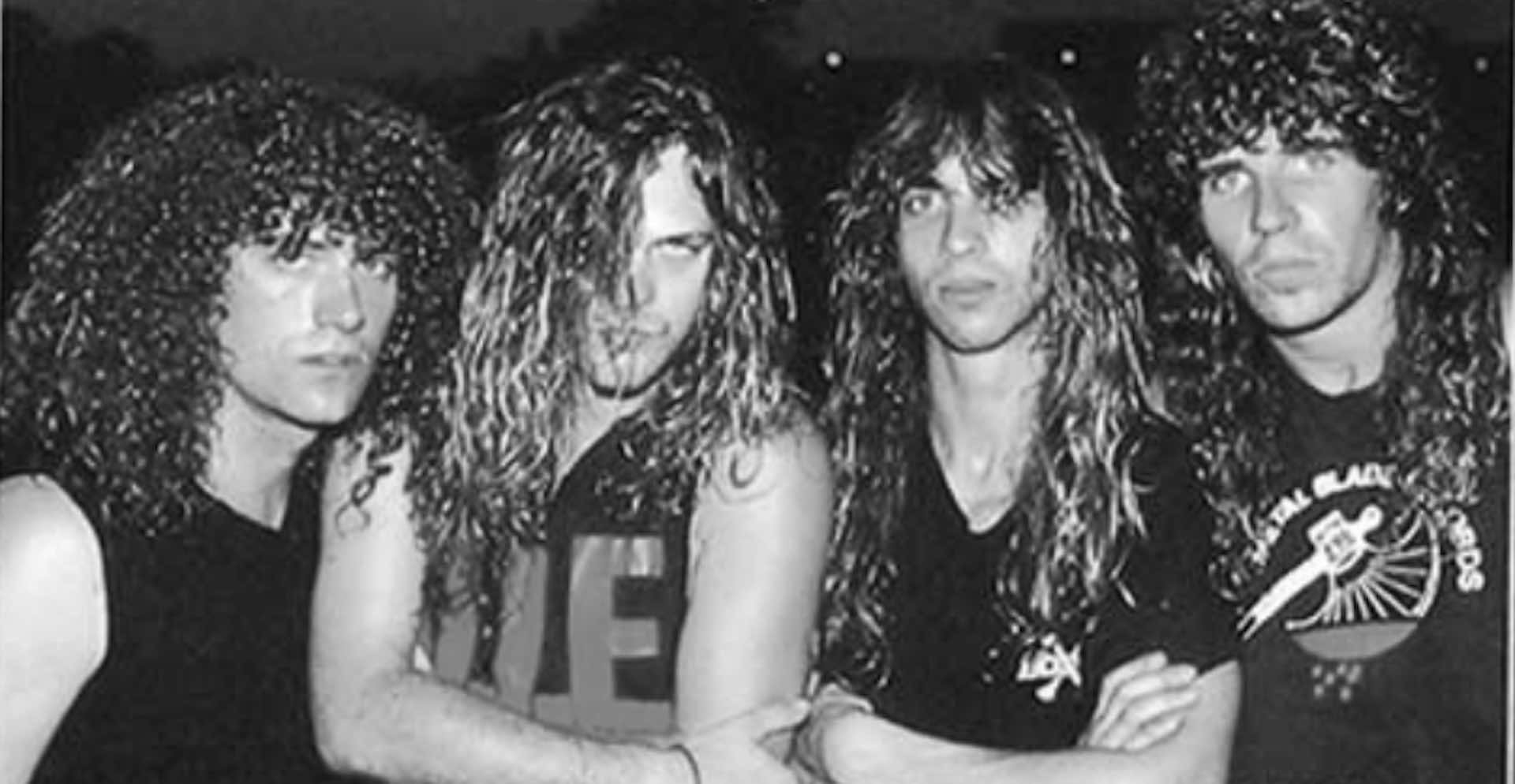 HALLOW'S EVE is a really good thrash band hailing from Georgia. The last time they were in Philly, a riot erupted at Club Pizazz after a few songs. We got to talk to bass player Tony Stewart.

How long has the band been together?
For the sake of convenience, I usually say that it began on Halloween of '83, which is basically true. Actually, the date of our record contract is October 29th, 1984, so it's not just hype. Only a touch of it. So, 4 years.

How did the band form?
Well, I started the whole thing by over-writing while I was in another band with Stacy. After writing a lot of unused material and concepts, I came to Stacy with the idea of singing on my solo project. He liked the idea and said he would join me permanently if it was a band. Since then, he and I have always worked like that - I come up with what we're going to do and he refines it, album concepts and all. It works well for us.

What has the band been doing lately?
We've been recording our third album, "Monument*, scheduling our fifty-date tour for this fall and winter with our new agent, working on more material for another movie soundtrack (like "River's Edge"), deciding all the new artwork for the next cover and tour shirts, and doing a few shows.

What bands influence you?
I've got some odd influences, so be warned. I grew up listening to KING CRIMSON, old GENESIS, BLACK SABBATH, JETHRO TULL, and the old British art rock. You've probably seen that influence if you were thinking about it. I think in two more albums we'll be referred to as something like art-metal. I think other bands will tag onto our bandwagon also. It's the only untapped source, except we're already there, just misunderstood as another thrash band. Look deeper, my friends.

Where do you enjoy playing the most?
We love playing all the Northeastern industrial cities, such as Philly.

Are you pleased with your last album "Death and Insanity"?
When a band makes an album, they love it. But a year later they hear all the mistakes so that the next album is better. "Tales of Terror" was slapped together from a demo tape in five days in a studio with a drummer who only sat in for Tym while Tym was recovering from a broken leg. "Death and Insanity" was very deliberate on the other hand and I think "Monument" will be the best yet.

TS: What messages do you try to convey in your music?
TOM: Usually we have a positive message, such as in "D.I.E." the message is that we're all dying the minute we're born, so don't waste your life on worrying about death. That message ran through "Death and Insanity". We try to paint pictures witn words and music of the things we do and see in our lives and share them with the audience who can identify witn these songs.

TS: What inspired the name HALLOWS EVE?
TOM: I guess the feel of that time of year. It was one of about five names I came up with and I decided on that one because we felt like we could put our own meaning to it. The other names we came up with were awful!

What's the craziest thing that's ever happened on the road or at a show?
I don't know about the craziest, but I can think of some wild stuff, like the riot in Philly or in New Orleans with MOTORHEAD. What's bad about the riot at the Philly show is that we had just driven 22 hours through what the radio said was the worst East coast snow storm in seven years. We nearly got killed dozens of times and arrived just in time to play two songs and get thrown in jail. Next time, let's get it straight!

Which show was your favorite? Why?
One Pittsburgh show really struck me as good, and Detroit, but my favorite was in a small bar in Morgantown, West Virginia, on my birthday. They had a cake for me and after the show and all night the beer was on the house for everybody. So it was like we came off stage to the biggest party you've ever seen. Two-hundred people trying to sing "Happy Birthday" and pouring beer on me all night! I was drenched, and I didn't get a shower until the next day. I was a brewery!

I understand that you've changed guitarists since the first album. What happened?
Well, we've never changed anybody, but one guitarist did quit, leaving us with just one guitarist. The guy just didn't like us.

When can we expect new vinyl from HALLOW'S EVE?
Probably in September. Right now we've come out with the soundtrack to "River's Edge".

What's up next for HALLOW'S EVE?
To keep waxing albums and to become a well-known touring band.

Any final comments?
Yeah. If you want to see us, or any other band for that matter, just go to the nearest place that has metal shows and emphatically demand to see that band. It's the people these promoters listen to.

We hope HALLOW'S EVE will return to Philly soon and be able to play their entire set without any complications. Until then, look for their new LP, "Monument".