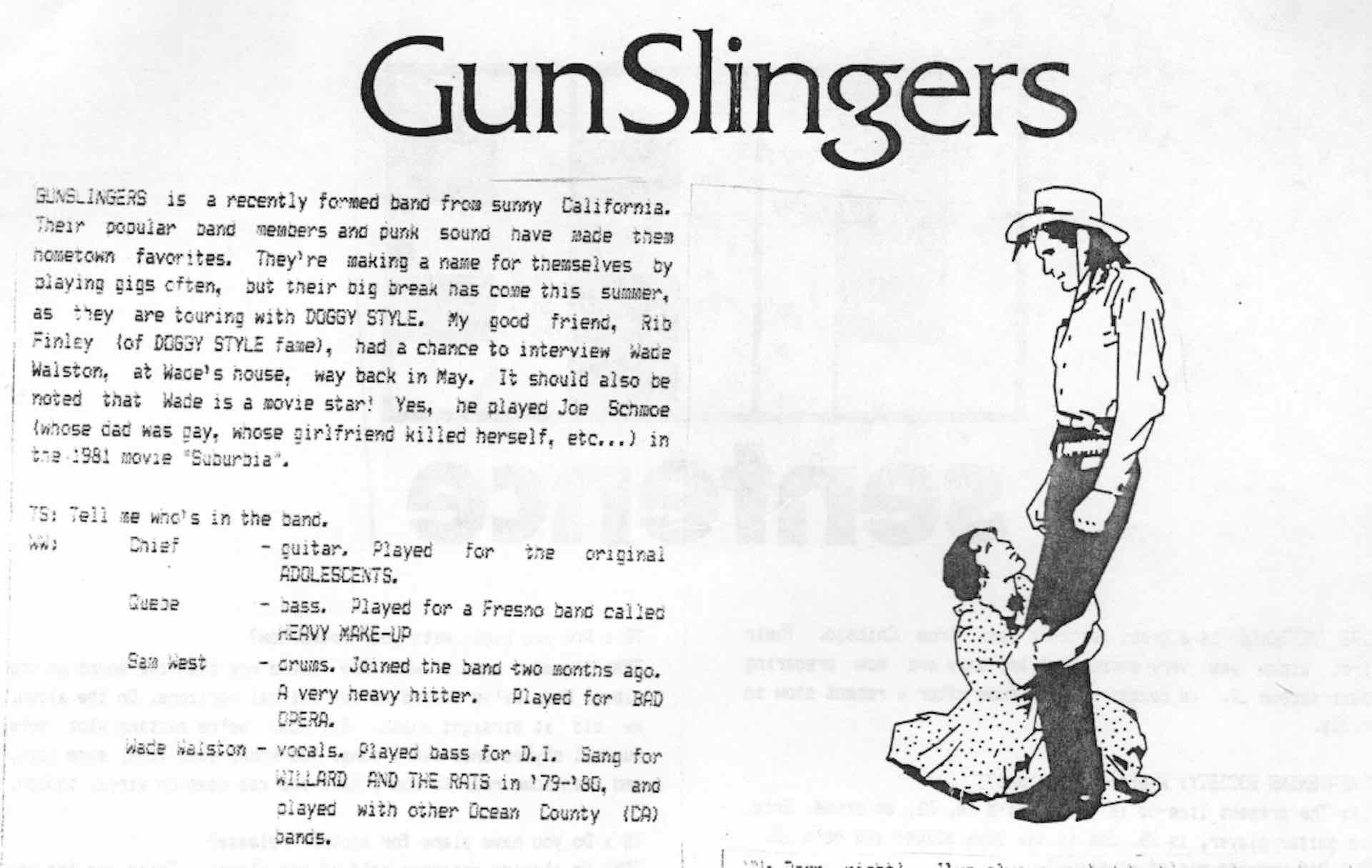 [LOOKING BACK: If I remember correctly, Wade Walston was friends with Rib Finley of DOGGY STYLE, who suggested I get in touch with him. Rib was a fan of the band. Wade was actually in the movie Suburbia, which was one of my fave punk movies. Man, I wish I asked better questions -- a running theme as I look back at Threatening Society. Wade went on to play bass for US BOMBS for decades. -- Mickey]

GUNSLINGERS is a recently formed band from sunny California. Their popular band members and punk sound have made them hometown favorites. They're making a name for themselves by playing gigs cften, but their big break has come this summer, as they are touring with DOGGY STYLE. My good friend, Rib Finley (of DOGGY STYLE fame), had a chance to interview Wade Walston, at Wade's house, way back in May. It should also be noted that Wade is a movie star! Yes, he played Joe Schmoe (whose dad was gay, whose girlfriend killed herself, etc..) in the 1981 movie "Suburbia".

Tell me who's in the band.
Chief - guitar. Played for the original ADOLESCENTS
Quebe - bass. Played for a Fresno band called HEAVY MAKE-UP
Sam West - drums. Joined the band two months ago. A very heavy hitter. Played for BAD OPERA.
Wade Walston - vocals. Played bass for D. I. Sang for WILLARD AND THE RATS in '79-' 80, and played with other Ocean County (CA) bands.

Give me some information on GUNSLINGERS.
GUNSLINGERS started three years ago. It was just the Chief - and Quebe back then. They used to go to practice in the studio without a drummer and vocalist. They'd practice for hours. I joined the bane about 6-7 months ago. They were called CLUB 502 back then. They went through various drummers and vocalists, but they never gigged until I joined the band.

What was it like to star in "Suburbia"?
It was fun, but stressful at times. Penelope Spheeris (the director) was a great woman to work with.

What are your influences?
It's hard! We like so many bands. But my favorite is a cross between old GENERATION X, RAMONES, DAMNED, and HANOI ROCKS. (This question was asked while Rib and Wade were listening to the DAMNED's first album).

Tell us about the songs on the demo.
I sing about everything from drug addiction and suicide, to love and peace. I try to keep our songs positive because I've experienced so much of these things, and I want to see things get better.

What do you have so say to the kids in Philly?
I can't wait to come out and play for you all. I hope I leave you with a lasting impression and new friends. See you all soon.