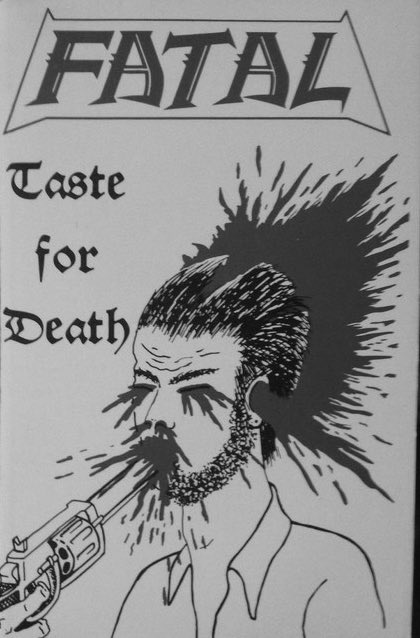 FATAL is a death metal band from South Carolina starring Carl Hanna on vocals, Erick Tappan on guitar, Mark Blewer on drums and Scott Metcalf on bass. This demo was recorded in 1987 and they are currently trying to organize a tour.

Brutal thrash/death metal executed with tight speed and power. Heavy, technical playing and violent power, ripping, crushing. The vocals alternate between pseudo-sick growls and whiney squeals, but they go well with the accompanying sonic assault. Typical lyrical nonsense, but ignorable. A must for metal fans, or (in the writing style of thrash zealot Scott Helig) any “Psychotic” death-thrasher with a “Taste for Death” should join FATAL’s “March of Blood” or else have their “Soul Condemned”. Send $5 (high quality recording, chrome tape) to Erick Tappan, 2225 Greenridge Rd Apt. 201, N. Charleston, SC 29418. [TONY]