LOOKING BACK: One of my favorite bands in the 80s, there was some wackiness. Within the punk world, there was a controversy as to who the real DOGGY STYLE was. The singer and drummer took off and formed a RED HOT CHILI PEPPERS kinda funk/rap unit with Doug Carrion and Brian Baker of DAG NASTY, using the name DOGGY STYLE. The remaining band members went on as DOGGY STYLE as well, releasing a joyful, melody-filled LP on Flipside Records, and a strong, but not as memorable, release on Triple X records. In any case, I was always quite partial to non-RHCP version... I became penpals for a while with Rib Finley, who became DOGGY STYLE's singer. Very nice guy. -- Mickey

The real DOGGY STYLE (not the rap group) has a great sound that can't be compared to anyone else. Their melodious music and singing (yes, singing) puts them a step above all the other O.C. bands, possibly all California bands. Definitely get "Doggy Style II" (Flipside), and don't miss their upcoming tour.

How does your line-up now compare with that of earlier times?
HEDGE: It blows it away!
ED: Hedge was always in DOGGY STYLE, but didn't want to play live. His band HVY DRT was a jealous band. They didn't even know he was writing stuff for us. Nobody knew! THE DIRT is broken up, and he's playing with us. Danny played for a local band called A.W.O.L. Rib Finley is really, really hot. He used to play with CONFEDERATE, but no more. Ray and I are original members.

Please give a brief history of the band.
HEDGE: Well, they formed in 84-85 with Ed, Lou (Gaez), Brad (X), and Ray. They had changes at times. But problems happened, and DOGGY STYLE 2 formed, and it's much, much better.

Your lyrics seem to be much more mature. Why did you take this departure from your earlier lyrical style, as seen on the "Side by Side" LP?
RIB: Because we're better writers now, we're a much smarter band. Not that they weren't before, but now we're tighter and better. Watch for the tour!!!
Your music style has also changed drastically. Why?? Are you more comfortable with it?
RIB: We feel at times that you have to change for the better. We want to make everyone feel good when they hear DOGGY STYLE. And since we've been playing in clubs, everyone likes it.
HEDGE: The earlier band had the goods, but our new stuff makes the devil scream!

DOGGY STYLE, judging from the "Side By Side" LP, was a straight-edge band. Is it still?
HEDGE: We're so damn straight-edge, it's sick. It makes me drink!
RIB: Yeah, and we don't mean Coca-Cola. 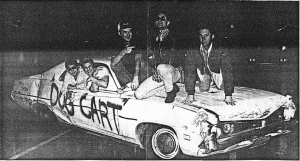 Does the new DOGGY STYLE work better together than the old DOGGY STYLE?
HEDGE: Well, I don't know. Leave my mom out of this. (??? - Mick)
RIB: We work great together. We hope to have many more DOGGY STYLE albums for everyone.

Why a cover of "Soul Man"?
RIB: We like the Belushi Boys.

What's your relationship with Brad X and Lou, and their new band, DOGGY ROCK?
ED: Pass on. They've changed their name to DOUBLE MINT.

How far would you like to take DOGGY STYLE?
HEDGE: We want to get where everyone wants to get.
RIB: We want to have fun, and we want everyone else to have fun.
ED: Money!!!

Do you play often? How popular are you (all modesty aside)?
HEDGE: Damn right.
RIB: So far, every show all through California, Arizona, etc. has SOLD OUT at $10.50 a ticket. Does that answer your question? Damn right we're happy!

Do you plan to tour soon?
HEDGE: Yeah. This summer - a wild, wild tour. A treat for everyone. You will love this tour.

Are you satisfied with the way the "DOGGY STYLE II" LP turned out?
ED: Fine! Happy! (smiley face)
How long did it take to do the cover? It kills!
ED: It tooks a couple of weeks, but what do you mean by "it kills"? We really don't understand your inside Philadelphia slang, holmes.
RIB: Don't mind Ed, he's a little tired right now. He's just waiting to leave for the road tomorrow.
Please tell me what or who some of your songs are about.
HEDGE: Our bro J-Dog wrote "Bonus Time Baby". He says it's about some chick he picked up on. Everything was cool, until he killed her. Now he's in prison.
ED: "Kick the Pup" is about our singer, Rib. He got divorced and his wife took everything except the dog. He kicks the pup!
RIB: "Discovering Books" is about reading all the books you can, fiction or fantasy!
Which songs are your favorite on the album?
HEDGE: "Black Dog" - a very deep and personal song I wrote.
ED: My favorite is "Black Diamond", by KISS.
RIB: "Puerto Rico" - a favorite I wrote a long time ago.

Why did you name your car "The Pee"?
HEDGE: One hot summer night, J-Dog and Ray got buzzed out. Those divine mad-cappers let loose and pissed in my car, for no reason! The smell lasted all summer. Pee!

What message, if any, do you want to get across through DOGGY STYLE?
HEDGE: We just want to let people know that we put so much damn positive stuff on our album, that it's coming out of our ears!
RIB: Get crazy, 'cause DOGGY STYLE is coming! And you better get your ticket, because we're going to crank!
ED: We want to squeeze as many great songs on one vinyl as we can.

What are the future plans of DOGGY STYLE?
RIB: A movie, video, naked parties... and you're invited to it all.
HEDGE: Coors.

What merchandise do you have available?
RIB: Everything! Write us.

Any final words?
RIB: Do it DOGGY STYLE. See the "Accept No Imitations" tour, 'cause we're coming fast.