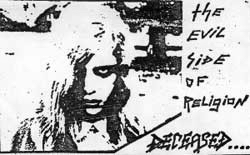 DECEASED — “The Evil Side of Religion” demo tape
DECEASED is a death metal band from Virginia with King Fowley on drums and vocals, Mark Adams on guitar, Doug Souther on guitar, and Rob Sterzel on bass.
Now with a name like DECEASED you probably wouldn’t expect a reggae band with a slight pop edge. Don’t! DECEASED are a totally noisy death metal band who scream with sick voices or don’t scream at all. It sounds like everybody in the band tries their hand (claw) at singing (puking) for a few songs. Basically, this group isn’t bad, but the production is piss poor and it definitely hurts whatever they’re trying to accomplish. No lyrics are included but stories about chomping on human flesh sound like feasible topics. Since this demo is free (send a little money!), you might want to check it out if you’re a NAPALM DEATH fan. (Though not reflected in their music, this band has a good attitude, in that they offer free demos and King also puts out a fanzine.) [TONY]