DAG NASTY's "Can I Say" has been a musical and emotional favorite of ours. For this reason, we were very happy to obtain an interview with them. However, we must apologize for the brevity of this interview. The members neglected (or refused?) to answer several of our questions. Perhaps this was our fault. Since "Can I Say," they have undergone almost total line-up revision (the only original remember is Brian Baker) and now seem reluctant to discuss their past and former members. Well, for what it's worth, here goes.

What have you been doing?
BB: Recording our second album, "Wig Out at Denkos," out on Dischord July 10. 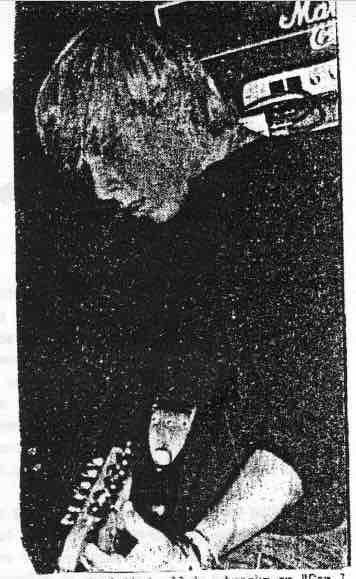 Where do you enjoy playing the most?
BB: Boston and Northwest areas.
DC: Chicago and Boston.
Where don't you like to play?
BB: DC and San Francisco.

Who would you like to play with?
BB: JOHN COUGAR, THE PRETENDERS, or any major pop/rock act in a 15,000-plus seat auditorium. The exposure is the important thing, not who we play with or the money.
DC: Well, playing shows with lots of good folks would be great because my songs would be heard by all sorts of people black, white, and so on. You see, it's all a game, and if you play it, you could win BIG!

Do you like the "Can I Say" LP? Would you change anything?
BB: I'd have Peter singing the whole thing and Doug play bass on the whole thing if I could. Otherwise, it's just fine.

What does the name DAG NASTY mean?
BB: No special meaning. It just sounds cool.

What is the scene like in DC?
BB: I don't go to shows, so I don't know what the scene is like.
Do you have a lot of support?
BB: I didn't find too much support. I'm not really sure what support is!

We'd like to know what inspires or influences your lyrics. Let's go through some songs on the LP and tell us what influenced you to write it.
DC: Let's not.
"Values Here"
BB: Smalley's lyrics. Ask him. I've HAD problems like fear of failure and reprimand, haven't you? I don't like these words too much.
[DAG NASTY refused to answer any other questions regarding the lyrics off of "Can I Say," which were written by Dave Smalley.]

What do you like to do in your spare time?
BB: Sleep, read, save the world. I have no spare time.
DC: Play music, buy tapes, read.

What caused the original DAG NASTY to break up?
BB: Personality problems caused the break up. New members saved the problems.
DC: I was in the DESCENDENTS. How should I know! Sure. The iron was on cotton.

I feel that all ten tracks on "Can I Say" are kind of linked together, which gives the album a type of integrity and continuity. Was this planned? Was there an underlying theme used to fuse these songs together, instead of a list of unconnected, varying songs?
BB: Integrity isn't planned; it comes naturally. Otherwise, it becomes contrived, and subsequently transparent and dishonest. The songs deal with human confrontation and emotion and basically, should be taken at face value. No sneaky stuff here. What can I say?

What will DAG NASTY be doing in the months to come?
BB: '87 tour July 1st to September 1st. Recording in Winter of '87. Touring Europe in Spring '88.

Any final words?
BB: Sorry for the short answers. I hate writing and I don't have a snappy computer like you do.

Well, whether the new DAG NASTY will be as great as the original (a tough job!) remains to be seen. Definitely check out the classic "Can I Say" LP and you might want to look into their new stuff. After they return from your, we will try to get another interview, with more appropriate questions.