In the years preceding the final formation of CONDEMNED ATTITUDE, the five members of the band were involved in various other quite popular bands. The experiences in these bands brought together Andy Anderson (20) on vocals, Keith Chatham (21) and Chris Scapparo (21) on guitars, Rick Strahl (20) on bass and Slade Anderson (19) on drums to form one of the best bands to play the hardcore/metal scene.

Bass player Rick Strahl helped form a band called ATTITUDE ADJUSTMENT a while back in San Francisco. This band would grow very popular within the scene, but not before both Andy and Chris joined a few months after its formation. ATTITUDE ADJUSTMENT recorded the infamous "Dead Serious" demo, as well as the great "American Paranoia" album. These works brought Andy wide recognition for their energy, originality, and humor. But due to personal differences, Rick, Andy, and Chris left ATTITUDE ADJUSTMENT.

They joined up with Slade, who recently left MERCENARY, and Keith, who had returned from Australia looking to keep his band CONDEMNED going. They all came together to form CONDEMNED ATTITUDE, mixing the styles of both CONDEMNED and ATTITUDE ADJUSTMENT into a psychotic mix of speed, power, and intricacy. 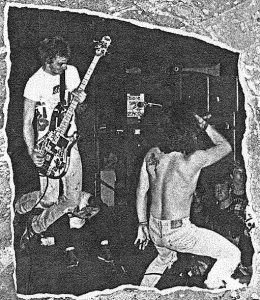 CONDEMNED ATTITUDE is a powerful, high energy band mixing straight-forward, fast-pounding beats with intricate parts to produce a full load of power and variety into their music. CONDEMNED ATTITUDE is a Question, NOT a statement and the question mark in the name is asking who is to judge whose attitude is condemned and why? The name means that if you look different, act different, or even have different views, your attitude will will automatically be condemned. The band is expressing their right to individualism to an un-concerned attitude, through their music and their lyrics, which also deal with personal, and social problems that in one way or another affect the members of CONDEMNED ATTITUDE.

The band is currently working on new songs and re-writing older sonds. The band will play a set consisting of material made up of some CONDEMNED songs, and a few unreleased ATTITUDE ADJUSTMENT songs as well as an array of brand new songs written in the short month-old history of CONDEMNED ATTITUDE.

Andy Anderson talked with us about the past days with ATTITUDE ADJUSTMENT and the future with CONDEMNED ATTITUDE.

What bands influence you?
MOTORHEAD, SABBATH, old DISCHARGE, and GBH.

What message do you try to deliver?
To have fun and strive for a better world. 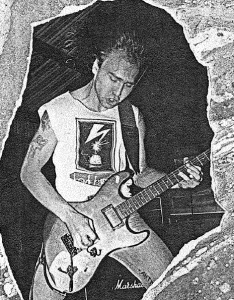 On several tracks on "American Paranoia" (like "Dope Fiend"), you seem to be delivering a straight-edge message without the usual, cliche, preachy attitude of many straight-edge bands. Are you a straight-edge band or is the message coincidental?
I myself do not do drugs, but I'm not straight-edge. I think drugs are wrong for me, but it's up to the individual to decide whether to do them or not. I would do drugs if I wanted to. So it's kind of weird and stuff -- hard to explain?
Do you dislike those who do drugs?
If that's what you're into, then fine -- that's a person's own choice. I do not like junkies because there are a lot of them over here.

What bands do you like playing with?
EXODUS, POISON IDEA, DEATH ANGEL, and DRI are all cool.

What do you think the biggest problem is? What can be done about it?
Too many people don't act right to each other. And that's life!

What's the scene like in San Francisco?
SF is cool. There are a lot of good bands like VERBAL ABUSE, DRI, BAD POSTURE, and NEUROSIS.

What has the band been doing lately?
Playing shows, writing new songs, and stuff like that.

Any final words?
Thanks a lot, and order our new demo.