[LOOKING BACK: This has gotta be one of the first BOLD interviews ever. If I remember correctly, I didn’t have any images of the band. So I cut images out of the booklet that came with the Cripped Youth “Join the Fight” 7″ record, or the “New York City Hardcore: Together” 7″. Either way, the record is a collector item, and I tanked its resale value by destroying the booklet. — Mickey]

BOLD (formerly CRIPPLED YOUTH) are a great young hardcore band causing quite a stir in the straight-edge scene. Here’s an interview with their lead singer, Matt Warnke.

How long has the band been together?
About 20 months.

Why the name change (from CRIPPLED YOUTH to BOLD)?
Because we feel it is more original as well as sums up our outlook – we speak from the heart.

Is CRIPPLED YOUTH/BOLD the first band for all of you?
It’s the first. 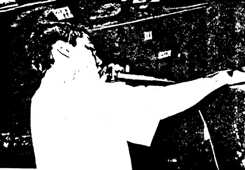 Are you satisfied with the way your “Join the Fight” EP turned out? It seems to be well produced and sounds real good. If you’re not satisfied, what would you change?
Well, it was recorded over one year ago and our new songs are naturally more complicated. But for what we spent, the EP came out well. I like all the songs really.

It’s very obvious you guys are straight-edge. What do you think of people who aren’t?
Everyone should do what they want. We don’t set up barriers depending on looks – just as long as kids care.

Where is the straight-edge movement headed? Is it growing?
Well, with more bands, more kids are seeing that it’s not necessary to drink to be accepted. So now people can go either way and be “accepted”. I think it’s growing.

Judging from shows you’ve been to, what do you think the biggest problem in the scene today is?
People not respecting each other is a problem – other than that, East coast shows are all pretty cool. 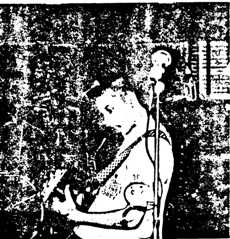 Who are your influences?
BAD BRAINS, CRO-MAGS, SS DECONTROL, DYS, ANTIDOTE, CAUSE FOR ALARM, NEGATIVE APPROACH, AND LL COOL J.

Out of all the cities you’ve played, which were your favorite? Worst?
Best – NY, it’s our scene, it’s like we just play our best at “home” and it’s like in front of our friends. I don’t think there is a worst.

Are you active politically?
Basically because I don’t know everything about it I won’t speak about it – I speak about what I really know.

What does the future hold for BOLD?
Record very soon for a 12″ and hopefully tour during the summer.

Any final words?
Know what’s right – in your heart. Unite all peoples regardless of races or beliefs.

Where can people get in touch with you? How about info on merchandise and available recordings.
Look for BOLD on the upcoming ‘Wishingwell compilation. Also, look for a BOLD 12″ in spring/summer. Send $7 pp for double sided t-shirts.