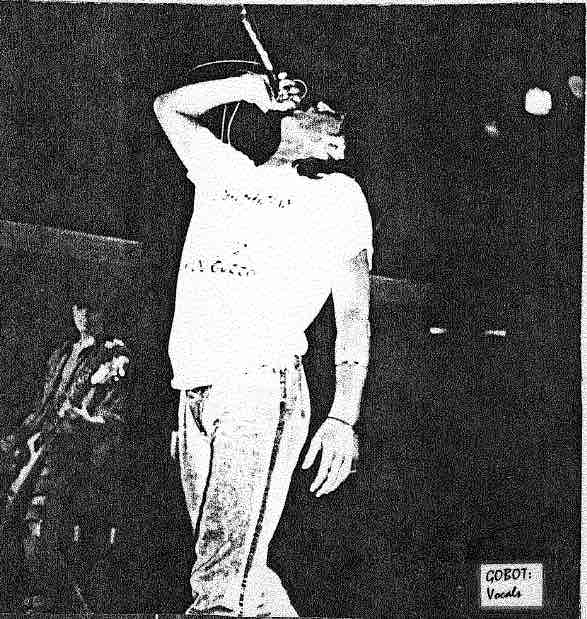 THE DEHUMANIZERS are a band that have endured numerous line-up changes and legal hassles to emerge as one of the premiere hardcore bands in their area, and throughout the United States. Their music draws in influences from countless other sources, as thusly appeals to a wide audience of “alternative music” fans. We had the opportunity to talk with these guys, who have a great sense of humor, as displayed in their music.

What is the new line-up?
MUDDY WATANABE: The current line-up includes myself, who recently replaced Intense on bass; Infra Ed on drums and backing vocals; Gobot on lead vocals; and Troll on lead guitar, who replaced Zoli quite a while back.

How old are all of you?
MUDDY: I am rather young, but wish not to disclose my age. Troll is very, very old. Infra is 21 and Gobot is 20. So, for what we have already accomplished, you could say we are a pretty youthful band.

How long had the band been together and how did it begin?
INFRA ED: The band was formed by myself back in 1984, so we have been around a solid three years. Basically, the band formed through trying people out. The name was already chosen, as was the majority of the musical style. However, that has greatly changed over the years. The original line-up was myself on vocals and guitar (not drums), Gobot, the current vocalist, on drums, Zoli on guitar, and a guy named Mort on bass and vocals (he left to pursue a college degree). Since that time, we have also had another bass player, Intense, who got booted along with Zoli. In three years, we have gone through seven people who have had considerable involvement in the band. Only four reamain – the current line-up.

What have you been doing lately?
TROLL: Lately, we’ve been on the road. As a matter of fact, we are answering this interview from a pay phone in Pennsylvania, we have also hit San Francisco, Idaho, Salt Lake City, Arkansas, and soon, New York and Georgia.

What bands influence you?
INFRA ED: No bands influence us. Each member of our band influences each other, we are also influenced by Jesus Christ, Reagan, society in general, and most of all, crowd response. For example, in Tacoma, Washington, we all took our clothes off and the crowd went berserk, so we too went berserk.
What bands do you listen to?
INFRA ED: we listen to SUBCULTURE, AT WAR, A.M.S.A., MENTORS, SNFU, COVEN, THE MELVINS, KISS, BAD BRAINS, BOB MARLEY, and the DOORS. We are not just into hardcore – we like everything which is slightly creative and takes talent.

Where are your favorite and least-favorite places to play?
GOBOT: The answer to that applies both ways – San Francisco and Portland. When we get good bills in those towns, the audience response is incredible, the clubs are packed and the pay ain’t bad, so we love it. However, at the same time, people are getting hurt and even stabbed when we play these towns. So, they are both the best and the worst. We have also had great experiences in Salt Lake City and New Orleans.

What inspired you to name the band THE DEHUMANIZERS?
INFRA ED: Lots of things. The world is slowly but surely being destroyed by humans. Eventually, what we have done will come back to haunt us. While DEHUMANIZTION is a horrible thing, if carried out, it may actually do the world some good. We are THE DEHUMANIZERS. The Lords of the Wasteland.

What messages do you try to convey in your songs?
GOBOT: We try to convey lots and lots of messages. Political. Anti-religious, pro-religious at times. However, at the same time we like to throw in humor and make our music enjoyable. While what we have to say is important, we do what we do because we enjoy it. Our message is important, but it is not number one to us. If a Christian wants to watch us – great. If a metalhead digs us – great. If skinhead’s into it – all the better. Homosexuals, Jews, and even racists are all welcome to enjoy our music. If they can’t dig our message, let them listen to the more comical songs, like “Renegade Smurf”. We are musicians – not politicians. We are here to entertain the world, not save it. The music comes first, not second.

Tell me more about Lou Guzzo. Did you ever get him?
INFRA ED: Lou Guzzo is an old friend of ours. Actually, he is a racist, Nazi, fascist commentator on a Seattle television station. All of his commentaries are messed up. One day he did a commentary on punk rockers and nightclubs. Essentially, he blamed both for the problems of drugs and violence among today’s youth. He also insinuated that punk rockers are worthless and weak and was asking that punk rock be banned in Seattle. I would say that we got him pretty bad with our record the “Kill Lou Guzzo* EP. He even tried to sue Dave at SUBCORE and just pissed him off tremendously. So, Dave put our new line-up into the studio to re-record the 7″ for a 12” version. This time, the attack on Lou will be even more ruthless.

Do you like the way “End Of Time” came out? Would you change anything?
GOBOT: It would be great to have the new line-up on it. Also, the SUBCORE logo and a few more names on the special thanks list. But generally, I’m satisfied. Ed, on the other hand, hates it. Both of us know that if we could redo it, it would be such better. But, we can’t, so I have no regrets.

What is the scene line in Seattle? Is there disharmony or unity among punks and metallers?
TROLL: Fortunately, in our area, there is unity among metallers and punks. The scene, at times, is really great and at other times it’s lousy. The club scene and hall show scene always sucks, but there are punk rockers in Washington, so don’t forget that.

How would you describe your music?
INFRA ED: A wide variety of originally – oriented original- sounding rock ‘n’ roll with a touch of comic jazz fusion.

Have you played a lot of gigs?
GOBOT: He have played well over 100 gigs.

How would you describe a typical DEHUMANIZERS show?
GOBOT: The typical gig I hate to describe – but you asked. Fifty to one hundred people. 40% metal, 50% punk, and 10% just there to scope it out, Maybe one or two skins in the audience. A small pit. A lousy P.A. system. And, we usually make $75, but we still give it our best.

What is the strangest thing that ever happened at a show?
GOBOT: Forget the strangest – they have little effect on us. Try the stupidest-brain-torturing thing. At one of our shows in Portland, a skin killed someone outside of the club. It left Ed and I sleepless for weeks on end. We don’t want anymore shocks like that happening again.

Has your music style changed in any way since you began?
INFRA ED: It changes weekly. From record to record. Even gig to gig. But it is always getting tighter and more creative. The only things that have remained constant is the originality and comic insights.

Do you plan to tour through Philly any time soon?
TROLL: We never know where we will be playing until someone tells us. I want to see Philadelphia, so hopefully we will be.

What inspired the song “Everybody Fight”? Is there much violence at shows there?
INFRA ED: “Everybody Fight” is another comically oriented song. It was inspired by what we see at our shows and written for Rambo. There is a hidden message, but on the surface, it is not to be taken literally.

What are plans for the future of the DEHUMANIZERS?
MUDDY: Tours, compilation appearances, and lots of vinyl work with SUBCORE. There is also talk of a little vinyl work with DEATH and ALCHEMY, which Dave at SUBCORE is all for. In fact, he is the one looking into it for us. Hopefully, now more work with NEGATIVE FX/BUNKER, the label who released “End Of Time” in Europe. The band’s future is full scale.

Any final words?
MUDDY: Suicide is not the solution!!!!

You can contact the DEHUMANIZERS through SUBCORE records. It is recommended that you pick up the “Kill Lou Guzzo” EP as a primer – just to prepare yourself for the adventures you’ll find on the “End Of Time” LP.