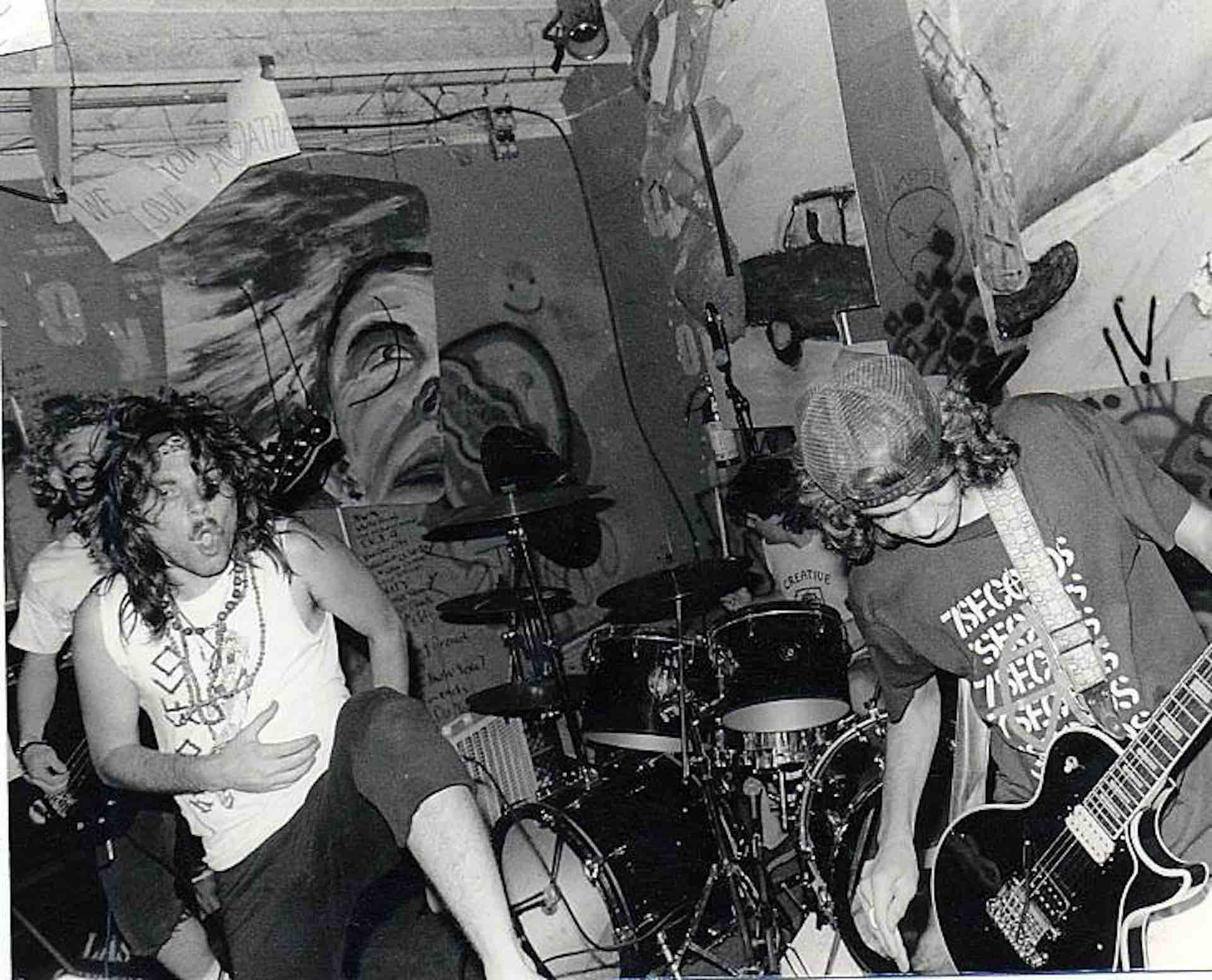 DESECRATION is a hardcore band from Arizona who have received a lot of praise for their "Who's In Control" EP, which is now sold out. Here's an interview with DESECRATION'S vocalist, Jack.

Can you give me a band history?
Well, let's see... Dave and Erik used to get together and jam all the time. At the time, I was taking a sociology class at Arizona State University and came home on the weekends to see what was up. Anyway, Dave played me this really groovy tune, which I thoroughly enjoyed. I decided it was about time we got a band together. I took all my hard-earned money from the bank account and bought a PA. We had our first practice with an old friend, Andy, who was kind of into the same stuff we were. The song I heard that fateful day would be the first DESECRATION AZ/HC song ever written - an anti-war song called "It's Just Begun".

Who writes the music and lyrics?
Dave and Erik write the music, although we all have a say if we want something changed or have a good idea. I write the lyrics in my own words and ideals, although the band is usually behind what I am saying. We sound a lot like European thrash acts, and, hey, that's great!

What's the biggest problem you take a stand against?
This is a real tough question. Some things that we feel we take a stand against in our scene is mindless violence, apathy, racism, and the neo-Nazi bastards. We will stand for what we believe, no matter what. Sure, a lot of kids don't support us 'cause we're so radical, and all the skinheads call us "peace fags". But who really cares? We know that's how people appreciate what we are saying and what we are trying to accomplish.

What is the biggest problem in the scene today?
I think it's acceptance of ignorance. Most people know what's screwing up our scene, and they accept it and support it. For example, many people realize that big business is ruining our alternative and making it mainstream (Combat, Death Records, for example). Yet these saw people are buying the records, spending $10 to go to a "punk" show, etc. The problem is that people aren't willing to sacrifice personal pleasure for morals.

Describe your scene.
A lot of uncaring kids and too many uncaring bands! Pretty positive, eh? OK, OK, there are a few really wonderful and caring people. The bands to check out here are LAST OPTION (great political thrash) and YOUTH UNDER CONTROL (great moshy straight-edge). That's about it. Prizms, an Arizona club, is a fascist, racist, capitalist exploitation scam. Bands and people should quit going there.

Are you happy with the EP? What would you change?
We are relatively happy with it, although it is sold out now. I would have liked it to sound a little heavier, but overall, it was pretty cool!

Any plans for another EP? Possibly an LP?
OK! We just recorded twelve new songs for a split LP with SUBVERSE (Canada). They rage! It will be on Manic Ears Records. Shane from Manic Ears is a really great guy, and it's a lot of fun working with him. I think the LP will be out in October or November.

Where have you played? Will you tour soon?
Actually, most of our gigs have been in Arizona. Except we played in Berkeley (CA) at the Gilman St. Warehouse, which is the best place in the world. If you're in a band and haven't played there, you need to. They're the friendliest people in the world. We won't be doing any touring for quite some time. Money's tight, and we just spent $830 on recording. Yuck!

Explain your problems with the band PEDIFILE. I've heard that you've fought both lyrically and physically.
This whole thing got totally blown out of proportion. They never hurt us or even threatened us. What did happen was a lot of "metallers" spread rumors that they wanted to beat us up, which may have been true, but I talked to their lead singer and he said it was all crap. Yes, they have written some pretty offensive material, and I don't support what they stand for, and that's that. None of the metallers here go to gigs or anything - they're kinda in their own world. We do have a song that deals with then and us called "Time To Grow Up". It doesn't cut them down at all, just explains our difference of ideas.

Are you straight-edge?
Well, I am and the band isn't. I don't wear "X's" or have a straight-edge symbol on my hands, so tell me if I am now. What people need to realize is that Straight-Edge is all fine and dandy, but it cannot change the world. Be proud of your health, then move on to something else.

How do your parents feel about your being in a hardcore band?
They hate it. They think it's evil and destructive. Our song "Blind With Ignorance" is a true story about how my dad accidentally saw a DESECRATION videotape and flipped.

You're getting really popular. Would you ever sign to a major label?
We are? Jeez Louise! I didn't realize! Anyway, NO, NO, NO. NEVER. See past views on big business.

Have you ever had trouble with cops?
Not here in Arizona. But I was shocked to see the cops in California in action at a party in San Francisco. My friend Joel and I were staying with Ron of FINAL CONFLICT and went to a party where they were playing on July 4th. Anyway, after about seven songs, this cop came by and told everyone to leave, well, no one did, and within minutes, fifteen cop cars showed up with a helicopter to bust a party of fifty people! They were wearing crash helmets and carrying clubs like weapons. It was really scary. Two kids were arrested. That is really scary - moving towards a Fascist state.

Do you believe in anarchy?
If you mean destroying the institutions that corrupt the society, like organized religion, private property, the state by educating people to work together as a team so that all people may benefit from the Earth's resources, then the answer is yes.

What's the danger/threat to the world: AIDS or Reagan?
Probably AIDS, 'cause Reagan is almost through with his tern of Fascism and lies. I do hope more research goes into AIDS - it seems more people are dying. A terrible thing.

Last words?
JACK: Really, not too many - believe it or not. Thanks for the interview. I hope people will read this and take the time out to write us! Peace and love... Oh yeah, I almost forgot: Ron wears Dr. Ruth's undergarments! HA HA HA!