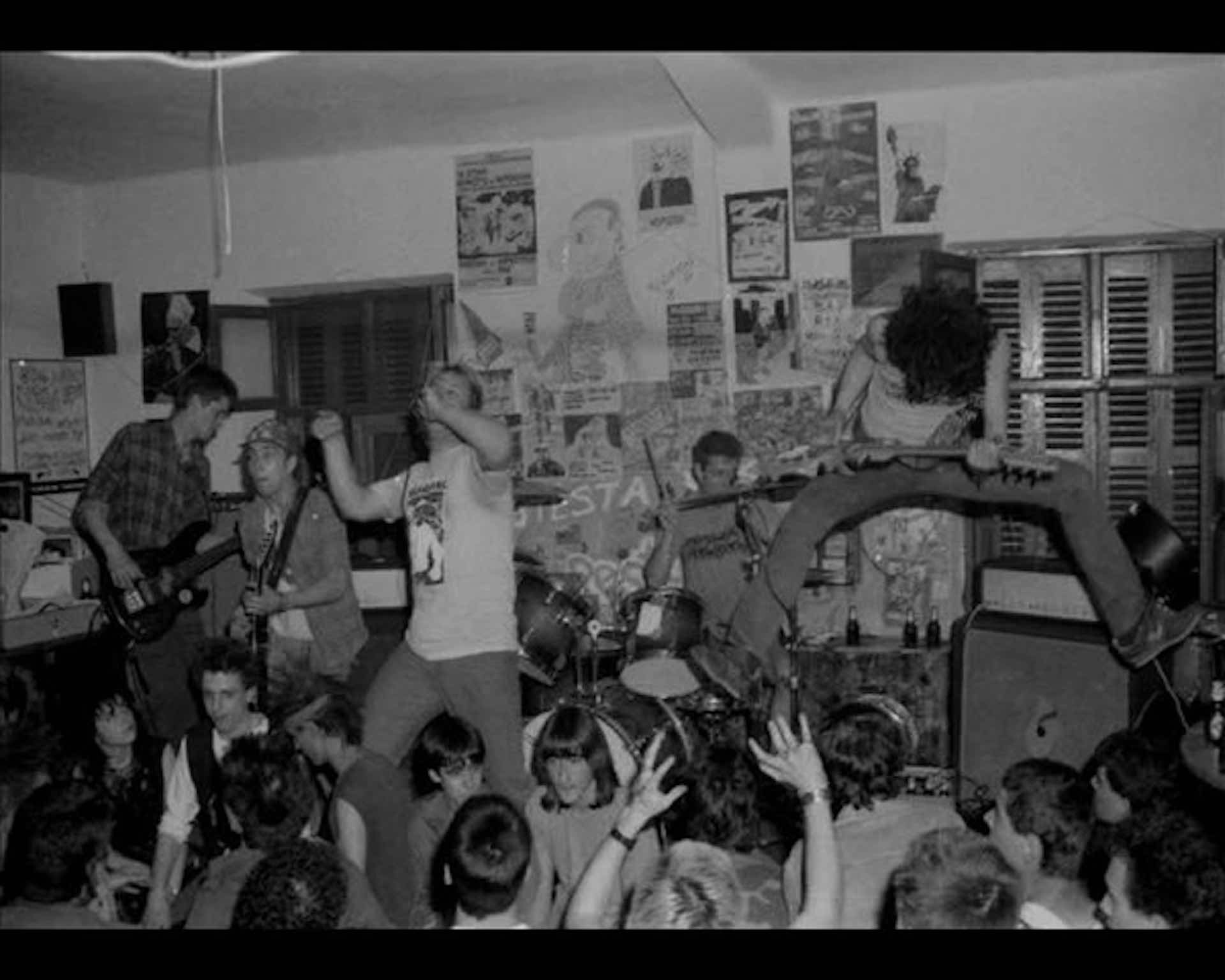 BGK is a hardcore band from Holland whose members have been involved in punk since the beginning. Many Philly scenesters got to see them live about a year ago at the Kennel Club. We spoke with their guitarist, Tony Nitwit, about the new BGK.

What is the band's line-up?
Mattis, 24, bass. Tony, 24, guitar and vocals, Marcel, 25, drums. Other members of the band are Wouter (driver and telephone guy), and Martin (help). You see, at the present, we have no singer, so we're trying to play as a three piece with yours truly trying to sing and play guitar. We'll just nave to see now that works out.

How long has BGK been together?
BGK started in 1982. Before that, three members had been in a different band together, since 1976. It was a punk band called the NITWITZ.

How did BGK form?
The NITWITZ singer was kicked out and beforehand, we had made the decision that if anyone would quit the band, the name would be changed. So we did that. Also because BGK was a totally different type of band: faster and more political.

What have you been doing lately?
We went to England for a short tour in March. Practicing, watching soccer games, checking out bands, working in Van Hall (a squat in Holland - Ed.), playing records, drinking beer, answering mail, and lots more. Currently, I'm also in another band that is more of a fooling around thing. Sorta sleazy slob rock.

Who was Balthasar Gerard?
Balthasar Gerard was the assassin of the first Dutch king, "the father of the fatherland" type of dude. So a lot of people who are into the royal family and stuff get a bit weird about our name. I guess it makes no sense unless you live in Holland. Jeez, this question has been asked about a billion times.

Are you politically active? What are your beliefs/views?
Well, what is politically active? It depends on what your idea of that is. We think we're doing at least a little bit. Like doing benefit tours and benefit gigs to raise money for various goals, such as direct action anti-militarist organizations, against nuclear power plants, raising money for El Salvadoran rebels, for lots of squats all over Amsterdam, anarchist duplications, etc. But it's not like we're full of molotov cocktail throwers. Some people in the Amsterdam squatter scene blame us for that, but they're stupid if they think everyone should do the same stuff as them. By the way, please buy the "Viva Unkhonto" benefit compilation LP, out on Mordam, which features bands from the US and Europe raising money against Apartheid. As for our political beliefs, I guess it boils down to a strongly anti-Fascist stance.

What's the scene like in Amsterdam?
It's getting worse. Schism and small talk seem to dominate, resulting in better shows, better people showing up, and an unpleasant atmosphere. The only bands that are intact and still playing out at the moment are FUNERAL OPERATION, NO PIGS, and S.C.A. Also look out for a killer band called GOD. Really great stuff. We still have our very own place, called Van Hall where we can set up gigs any time. It's probably still the best thing in town. Some new bands should be popping up soon, while older bands like ourselves are coming out with new line-ups or with a new repertoire. So we'll just have to wait a while, and see what the changes will bring.

What bands have influenced you or do you listen to?
In BGK, musical tastes vary from Tom Jones (seriously), to Motown, to Fripp, to POISON IDEA, to the STRANGLERS. We listen to lots of stuff. My personal favorites are the STOOGES, RADIO BIRDMAN, MC5, and stuff like that. Also, NEGAZIONE, ZODIAC MINDWARP AND THE LOVE REACTION, CRAMPS, NY DOLLS, SABBATH, DESTROY ALL MONSTERS, NEW RACE, SCREAM, SUA, DEAD BOYS, etc....

Where do you like to play?
Anywhere where it's good to play. Like the south of Germany or the US. Holland is usually a bit funky because the crowds are sorta spoiled and stand around only, for Dutch bands.

Where was one of your favorite shows?
Odessa, Texas was cool! Cowboys drinking Bud and getting into BGK. We thought they were going to shoot us but they took us to a party instead.

What do you think of crossover?
All those bands sound the same. The only one of those bands that I respect are COC. From what I hear, they are still very cool guys and not into being on some rockstar trip, and they help out other bands too. (It's true - Ed.) But in general, I think this crossover craze is ridiculous and not really bringing about any diversity. The music is DK to an extent, but the lyrics are usually stupid satanic crap, or cliched nuclear war stuff. That's OK, I guess, but I wouldn't mind hearing some intelligent stuff. METALLICA are a good example. I like them, they have good lyrics.

Are you pleased with the LP "Nothing Can Go Wrong"? Would you change anything?
I'm pleased with the album in a way because it shows progress, but then again I'm not too happy with the guitar sound and volume. We always have problems in the studio and now seem able to capture a decent sound quality. I guess a more expensive studio would help, but we don't have the needed money for that. Also there's no punk/hardcore producers over here who really know what they're doing. So most likely we'll do our next album in a cheap studio again, produced by ourselves. I fear it will come out as wimpy sounding as the last, but we can't all afford 24 track studios on a $100,000 budget.

What is the biggest problem in the world?
Well, I'm not the authority here, but man, what bugs me is the mentality of people everywhere who don't mind being governed and blindly follow their leaders who do all sorts of crazy things in their name. Materialism, threat of war. I think political chance cannot be achieved from "the masses" nor from the top. The multinational companies who own the government would never allow radical chance, so it has come from the awareness of the people. Their way of thinking should be changed before anything else can. But that might take centuries, if at all. People's minds are already being completely programmed by the media. Once you notice that and try to pay attention to it, you REALLY start to notice all the messages and role-patterns. Just watch some soap opera or TV film.

What messages do you try to give in your music?
Read the lyrics and find out. If anyone gets something out of it, that makes it worth it for us. We basically just show a conflict in one way or another. Small scale, or world-wide scale. Often we don't give a direct solution but we clearly take a stand. If that makes people think about these problems and take a stand, that's something I feel we've achieved. Especially if these people never thought of these things before.

You played Philly about a year ago. What do you think of Philadelphia, and the U.S. in general?
We thought Philadelphia was cool - good atmosphere and really cool people like those zany party animals of the Crypt (a Philly squat - Ed.), and of course those rich black kids playing heavy metal, HOMO PICNIC. It seems the US scene has really went downhill since our first tour, in terms of bands demanding huge guarantees and rock promoters creeping into the scene. So we feel the European scene is getting healthier, i.e. independent bands helping each other out rather than rivalry and competition of who is the opening or headlining band. Luckily, there are also a bunch of real cool bands and people over there who are working hard to get a better independent scene, but it seems people would rather pay $10 to go see a band in a big club than in a mall place. Oh well.

Do you plan to return to the United States soon?
TN: No. At the moment, we do not play out at all, and have no plans to tour. Especially a project like touring the US takes a lot of time, preparation, and money.

What will BGK be doing in the near future?
First, we want to rehearse a lot and get a lot more music, and release a third album, and support its release by doing a few short tours on the European continent. Currently, we are working on an entirely new and different set. The music is progressing and changing all the time. The new music is a bit slower, but still HC. We try to do a lot of different stuff, and even sneak in funk/jazzy influences, rather than do the acceptable and cliche speedmetal garbage. Also, I'm trying to write better lyrics and get away from the slogan-type stuff.

What merchandise do you have available?
We're not really into the idea of merchandise and such, but we do nave a few more copies of the "Jonestown Aloha" album for sale. I think we're no longer available on R Radical in the US. Also, we have absolutely no more "White Male D" EP's, but we still have plenty of "Nothing Can Go Wrong" albums. These, and t-shirts are available from Alternative Tentacles records in San Francisco.

Any final words?
Yes, thanks for your interest in the band.