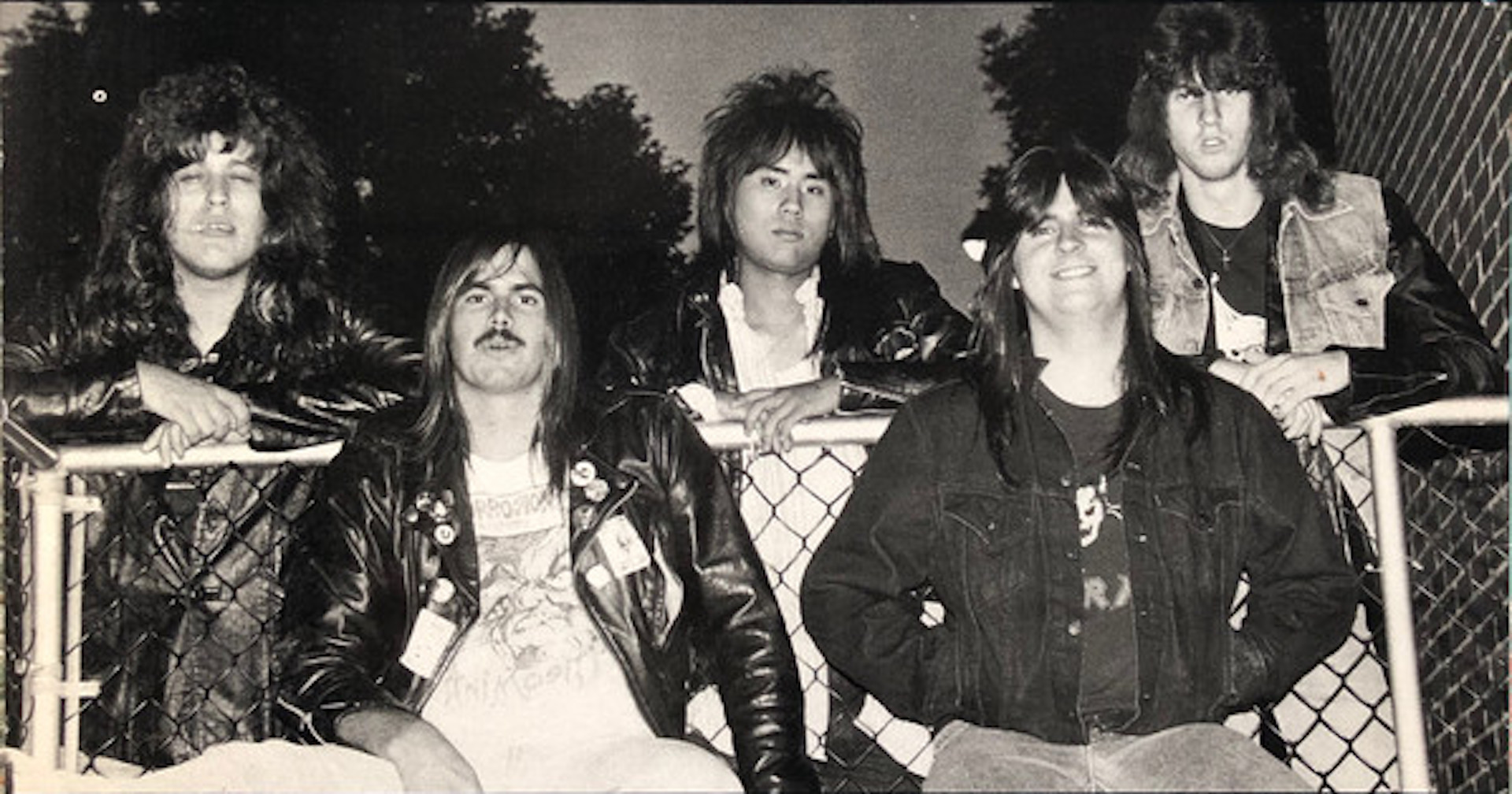 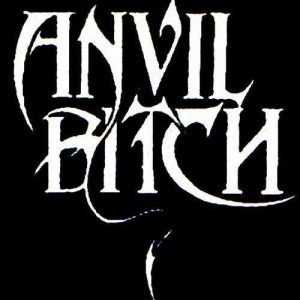 [LOOKING BACK: Anvil Bitch was kinda of a big deal in the metal scene in Philly in the mid-1980s, with a strong following as they shared bills with monsters like Exodus, King Diamond, Overkill, and Motörhead. It was kinda cool that their new guitarist, Herb Yeh, went to our high school, so we cornered him for an interview.]

ANVIL BITCH is probably the best thrash metal band in the Philly area. They have been delighting show-goers for a while now, and even the poor production on their debut album couldn’t keep their power from bursting through the vinyl. We have the pleasure of going to the same school as one of the members of ANVIL BITCH, the incredibly talented guitarist, Herb Yeh.

THREATENING SOCIETY: How long has the band been together?
HERB YEH: The nucleus of the band has been together for about 2 years. I just joined the band about 8 months ago.

TS: How did you get together with them?
HY: Well, what happened was, they were looking for another guitar player to make the live sound fuller, because for the type of music that we’re playing right now, one guitar isn’t loud enough. 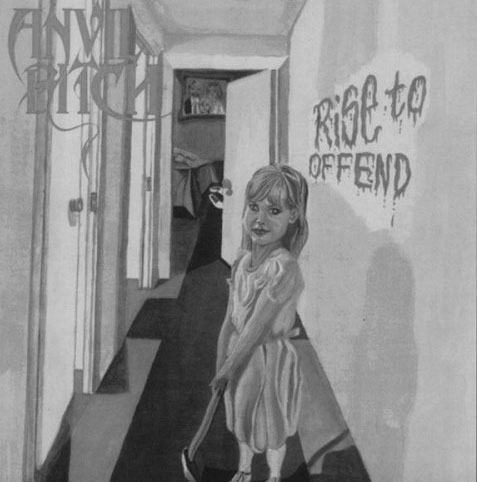 TS: How long have you been playing guitar?

HY: I’ve been playing for about four or five years now.

TS: Did you take lessons or teach yourself?
HY: For a while, I taught myself. Just in the past couple of months I’ve been starting to take lessons. I think it’s really important. I’ve learned a lot from it.

TS: What bands influence you?
HY: I think our music is heavily influenced by bands like METALLICA, SLAYER, and EXODUS, except you can tell in the songwriting there still is a carryover of like MOTORHEAD and ZZ TOP, and really bluesy stuff. You know thrash is basically heavy, fast blues, taken to an extreme.

TS: What was your favorite show?
HY: I’d have to say that my favorite show was opening up for MOTORHEAD at the Trocadero here in Philly. There were hundreds of screaming fans… it was great.

TS: Are you pleased with your debut LP, “Rise To Offend”?
HY: The first album was more of a learning experience for us than anything else. I expect the second album to be much better as far as production goes. We’re going into a really professional studio this time. We don’t have to worry about money. I think the songs on the second album are going to be much better. It’s something that fans can really look forward to. A lot of people come up to me and say “Oh, the first album was great, except the production…”, and they’re not telling me anything I don’t know. Hopefully, next time we’ll be giving them a much better product.

TS: How did you get signed to New Renaissance records? Did you have other offers?
HY: We had some other offers, but none that we were really interested in. We had contacts with New Renaissance. They heard about us, our demo, which was released a couple years ago. At first, we played on the compilation album “Speed Metal Hell 2”. And I guess it got good response, so they offered us a two-record deal. From there, everything got taken care of.

TS: What has the band been doing most recently?
HY: We did a mini-tour up and down the East Coast. We went to Detroit. We’re starting to write songs for the next album. Probably in late June-early July, we’re going to start recording.

TS: What will the title of the next album be?
HY: We’re looking at some ideas. Possibly “Hand of Fate”. We’re not really sure.

TS: You’ve played with a variety of bands, ranging from opening up for RUIN at the Kennel, and MOTORHEAD at the Troc. Do you prefer to play with metal bands, or with hardcore bands?
HY: I personally prefer playing with other thrash bands. It’s definitely fun playing for a hardcore crowd, ‘cause they really get into it, but we do get a better response from a “metal” crowd. 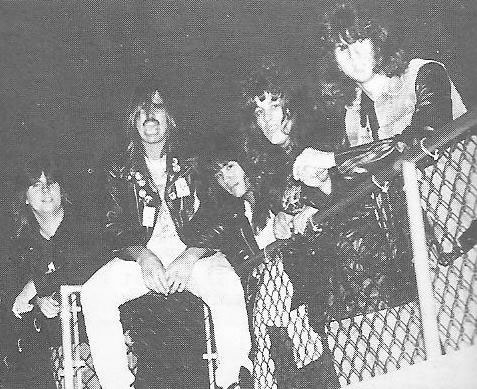 TS: Are you into hardcore? What HC bands do you like?
HY: I don’t listen to much hardcore. You see, my position in the band is, I play, and any songs I write are more to the metal side – it’s still thrashy, but I have more of a metal influence. I also try and throw in some classical elements in my music. Our bass player, Dave, and our drummer, Chuck, are both heavily into hardcore. They like D.R.I., AGNOSTIC FRONT, G.B.H., and that type of thing. And I think you can hear it on the first album – songs like “Fight For Your Life” and “Maggot Infestation” are very hardcore influenced.

TS: Is that the metal or hardcore scene?
HY: As far as metal goes, anyway. But the hardcore scene too – I mean, the Kennel Club is closed. There’s just not that much of a push. It’s tough to break in. I think metal in Philly is starting to open up. There are some places where the metal scene is really good. We just played in Boston a couple of days ago, and it’s fantastic up there. The people enjoy it, and a lot of people are into the scene.

TS: What’s the craziest thing that’s ever happened on a tour?
HY: A lot of crazy things have happened to us. Probably the craziest was the time we drove into a ditch!

TS: What do you think the biggest problem in the world is?
HY: I think that the biggest problem is that people don’t care. Everybody has a negative attitude, you have to look at things with a positive aspect. Sure, you have to see that there are bad things, but the solution to the bad things isn’t to be negative about it. Try and take a positive approach towards things. Another big problem is that people don’t have a sense of humor anymore. Our music – we try to get some type of message across, but at the same time you have to be humorous. People come to our shows – sure we’re trying to say something, but if you’re not having a good time, it’s not worth it. It’s not worth living a life where it’s always boring. 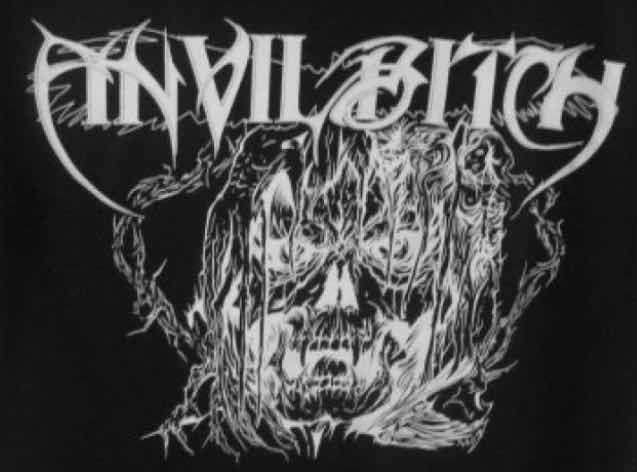 TS: Is the band a part-time endeavor for you, or would you like to make a career out of it?
HY: The band, as a whole, is trying to be very serious. We’re going for the top, 100%.

TS: What are your opinions on crossover?
HY: I think it’s good to draw in influences from other types of music, ‘cause that’s what makes you original. That’s what sets one band aside from another band. I think any type of crossover is good for the music, so this way the music doesn’t stagnate, and all the songs won’t sound the same.

TS: What is “Rise To Offend” about?
HY: It’s about big, rich, Boss Tweed – type people taking advantage of people who don’t have as much money. “Rise To Offend”, to me anyway, doesn’t mean going out and axe-murdering everybody. It’s to take a stand for what you believe in. Stand up for what you believe in. But make sure you’re having fun. Make sure you do what you do for the right reason. If you’re into it, be into it. It doesn’t matter if you have long or short hair.

TS: Are you playing in the Philly area soon?
HY: On June 14, we’re headlining at the Empire Rock Club. And on July 13, we’re going to do a killer show at the Trocadero, opening up for KING DIAMOND, so that should be a really happening show, especially for you KING DIAMOND fans.

TS: Any final comments?
HY: Come out and see the band, and have fun!

Keep an eye out for the next album by ANVIL BITCH, which will probably gain them the success they are destined to achieve. And go check ‘em out at the one of the shows mentioned above. Guaranteed excitement.