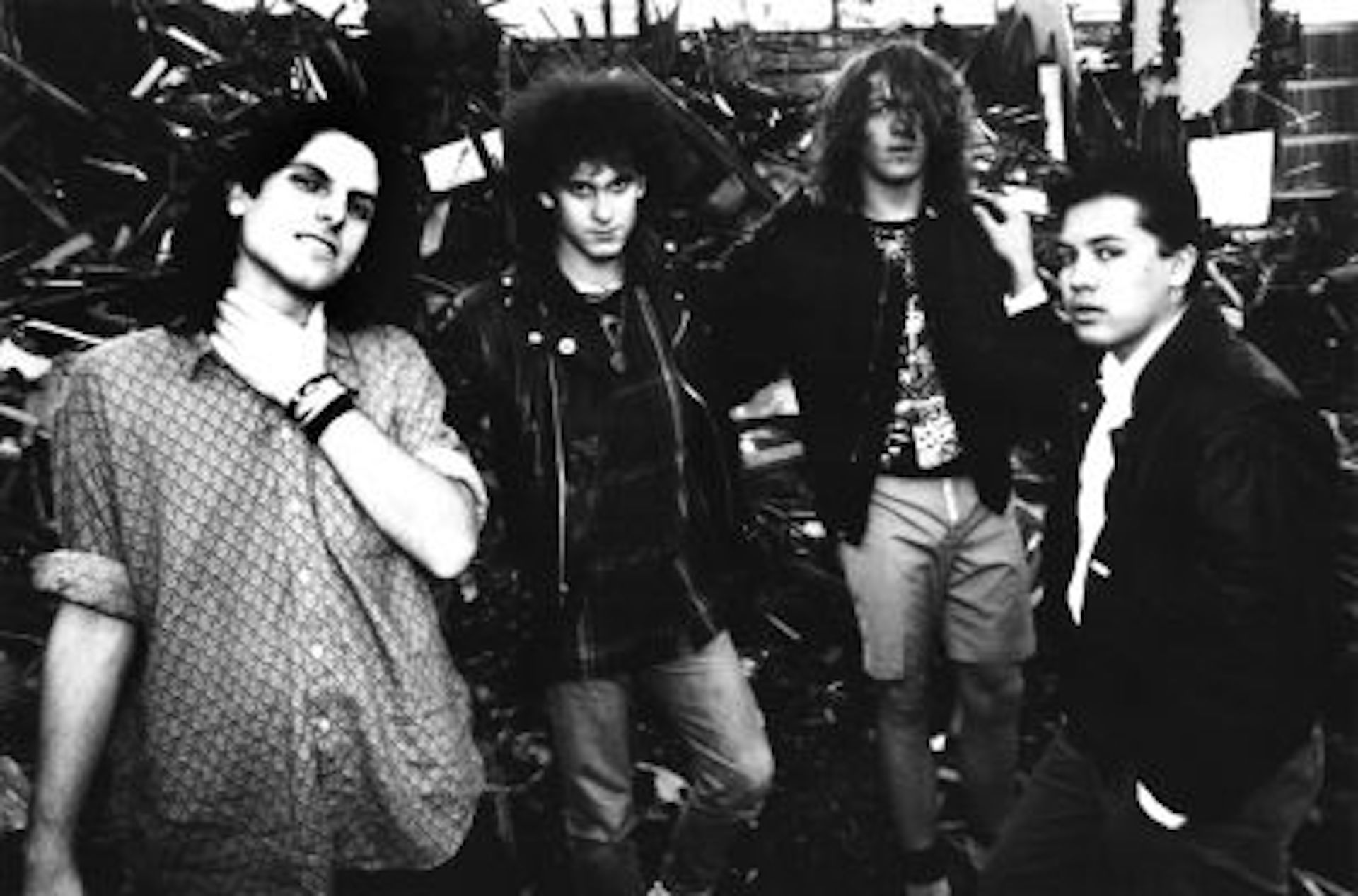 [LOOKING BACK: Over the last 40 years, 7 SECONDS has been one of the most beloved bands in all of punk. Yes, their signature blend of melodically-driven hardcore is incredibly infectious, and their positive-focused lyrics . But at the heart of the band is their frontman/primary songwriter, Kevin Seconds, who continues to demonstrate an unfailing enthusiasm for art in all forms. Apologies for the interview cutting off sup abruptly -- we came across a printed transcript of our interview, but a page was missing! Grrrr! There’s still lots of good stuff here to enjoy! -- Mickey]

Since their beginnings in the early 1980's, 7 SECONDS has become one of the most popular and influential bands in the underground music scene. Though recently criticized for their change in musical style, and, by some, for what they consider selling out, the band has continued to release records and tour extensively. The following talk with their lead vocalist Kevin Seconds occurred i the summer of 1987 in Trenton, NJ, while the band was on tour with the CIRCLE JERKS.

I'm on vocals. Bobby Adams is our guitar player, Troy Mowatt is our drummer, and Steve Youth is on bass guitar.

Are you touring right now?

Yup! It's a two-month thing that we're doing with the CIRCLE JERKS. We have an album coming out on Restless/Enigma called “Ourselves,” and then we're going out on our own tour.

Between your “New Wind” and “Praise” records, there was a definite musical transition. Do you feel that you've alienated some of your earlier audiences?

If we have, we never meant to. We never sought a certain crowd. We’re happy that we've got a strong following and the hardcore kids are into us. We're a Band that's been around for eight years, and there's a lot of room for change. I can't really say. There are people who say, "Oh, I hate the new stuff, but I still come and see them live." And there are a lot of people who like it. So we have to go with it. At least people will be honest and check it out before blowing us of.

I'm not a fan, and I never have been. In the last two years, shows have been getting a lot less expensive. Especially on a bill this, where you have so many good bands. You know, these places can get a lot of people to come to showş, and then they charge… I mean, on this tour, we've played shows from anywhere from $6 to $12 door prices. I'm against it! I'm not for it!

It's not like we make thousands of dollars. That's not what's important. What I'm saying is that I'm-not a fan of the idea. l'd just as soon play places with low door prices and see everyone get in.

But the ventilation in there!

Do you always play all-ages shows?

The only time we've done over-21 shows is if they say, "The only way we'll put on an all-ages show is if you play an adult show later." And then we'll do that, because we want the all-ages show. There's been a couple of exceptions. We pulled into Vancouver a few weeks ago, and a guy comes in and tells us to set up, but over the door is a sign that says "No one under 19 allowed in" or whatever. And when I asked the guy if it was all-ages, he says "Oh, no, it's over-age." So I was like, "Oh, surprise!"

I notice how sometimes while playing live, you guys go off. Like tonight, you did a little MINOR THREAT thing. Is that spontaneous?

Oh, yeah. We've done the MINOR THREAT thing a couple of times, but most of the stuff we do we'll pick up, and if we like it, we'll do it again. It adds to the songs, especially to the old ones that we've been doing for so many years.

Do you ever get tired of doing the old songs?

Oh, sure. There are some that we don't do anymore. People say, "Why don't you play stuff off the “Skins, Brains, and Guts” EP? Well, it's because we've been playing that stuff for like six or seven years. We'd rather be honest with the people who come and see the shows, and just play what we feel good playing. We still feel good playing “Young Til I Die" and "Colorblind", because those songs are still rocking.

Why did you have so many line-up problems? It seems like you need a scorecard to keep up!

It's pieces of everything. We've always been a group of friends. There have been a couple of exceptions, where someone tried out for the band, and then they were in. Like Bobby was this little skater kid who would follow us around and loved 7 SECONDS, and we let him jam with us. Now, two years later, he's our guitarist. This line-up has been very solid for almost two years now. Steve's back, which is very important for this band. Troy's with us. And with Bobby, he gives us more energy, because he's only 19. He's still very energetic about things. Sometimes I get to be an old..."GRRRR.." about things.

What do you see different about the scene between back then and now? Is it better or worse?

I wish that I could answer that, but I really don't know. This tour has been very cool, because the violence has been very minimal. We haven't had a lot of trouble with skinheads. Last year, we had tons of problems with skinheads. It's good, but I don't know if people come to our shows and don't fight, and at GBH next week, they do.

A few years ago, it used to be "The scene! The scene!", and everybody was sorta connected. People in California connected with people in New York. And now it seems like with big business coming in, you're getting labels with big money, the radio stations are kissing up to the record labels so they can get free records, the bands are getting swayed by big money. Now it's easy because we get a lot of so-called "big offers."

Do you plan to release anything else?

This is the deal: We’ve got two records that should be out any day now. A band from Illinois called WAR ON THE SAINTS, who are a really, really great band. And also a band out of Reno, who are friends of ours, called DIVISION. We've been talking to bands from all around his way [New Jersey -- Ed.] A band called STICKS AND STONES, who we like a lot. (l just talked to Pete, their singer, and we're going to discuss more about this record.) Also, this band called VISION, and another band called THE STAND. We're talking to all three of those guys, and I like what they're doing. They all sent demo tapes, and they're all pretty good.

Do you find your musical tastes growing mellower as you grow older?

To tell you the truth, no. Even at my hardest, I've always listened to BOB DYLAN, BOB MARŁEY, you know... blues, or whatever. So l can't say really right now as I'm growing older that l'm growing mellower. I listen to everything. Everyone in the band listens to different things.

What's the deal with the "7 SECONDS Friend Cub”? People who have sent in their money haven’t heard anything. The same with Positive Force.

Well, the "Friend Club" was funded by the band, and we couldn't handle all of the mail that we were getting. We'd get them to fill that, and a lot of people just wàņted information, so we'd sếnd them the information. A lot of people said, "Do you have a fan club?" We didn't, so we decided to start one. A lot of mail came in, and a lot of people moved away. My ex-girlfriend just got up and left for South Carolina, so I've got all of this mail. Positive Force mail and 7 SECONDS mail. About a half of a year ago, we moved from Reno and based ourselves in California, and there's just literally boxes and boxes of mail that hasn't been answered yet. I've got two friends who in the next week are supposedly going in there to pick it up and start answering the old mail.

It seems that letters in Maximum Rock 'N Roll gave you guys the reputation that you never answer your mail.

Some people will come up and say, "Look, man, I ordered two records", and I'll get their name and number, and I'll call this friend of mine, and we'll go through the records and it's easy. A lot of people won't say anything, or they'll write a letter six months later, saying, "Six months ago I sent you.." And it's like, "You should have sent a letter a month after, and we would've made sure you got it." I mean, Positive Force isn't big business - it's one of those things where you have people going, "I hope that you're not ripping me off."

Is the band your full-time job?

[Laughing] If you call it a job. Pretty much. We're on the road a lot, and we were living in a four-room office space with a bathroom and no shower. We were taking showers down the street. People come up to me and say, "Big rock star!" or something. I say, “Man, you've gotta see where I live!"

A lot of people say that you've sold out.

It seems, though, that you've been doing it for such a long time, that you have the right to take a shower in your own house.

| think so. I'll tel ya, if we went out and played for the money, then I’d think that we were selling out. If we were trying to make ourselves another kind of band that wasn’t us - a glam band, or a beach band... To me that's not us. To me, that's selling out. Even if people are into that -- if that's their trip -- that's cool. But I’ve heard it all, and they can call us whatever they want. It's not going to affect me, and it's not going to affect the music. We're going to work as hard as we have, and we're going to keep coming out playing, because that's what we're about. I don't even care about the records, 'cause this is live, we're on tour!

How close have you come to calling it quits ?

Heh. There have been times when I've thought about it, especially after a night like tonight, when we come out, and l'm wheezing, going "Gasp! Gasp! No more!" I dunno, I guess the biggest problem is he violence. There have been fights that have actually made me throw down the microphone, and walk offstage. I don't like doing it, because it doesn't solve problems. I think that's the closest that I’ve come to quitting. l don't care if anyone thinks that I'm a "peace-lover", or "hippy-dippy", or whatever. I think it's completely ignorant. There's no room for it anywhere.

Tell us about your new release.

It's thirteen songs, and it's called “Ourselves.” It'll be on Restless Records.

Was “One Plus One Live” just a filler between albums?

Yeah, I think so. It was mainly our manager saying, “We've got some tapes here. Let's put out a live album. It wasn't the best live shows we've done, but we wanted to do something, and everyone was saying, "Let's put something out!", so we put it out [on Giant Records].