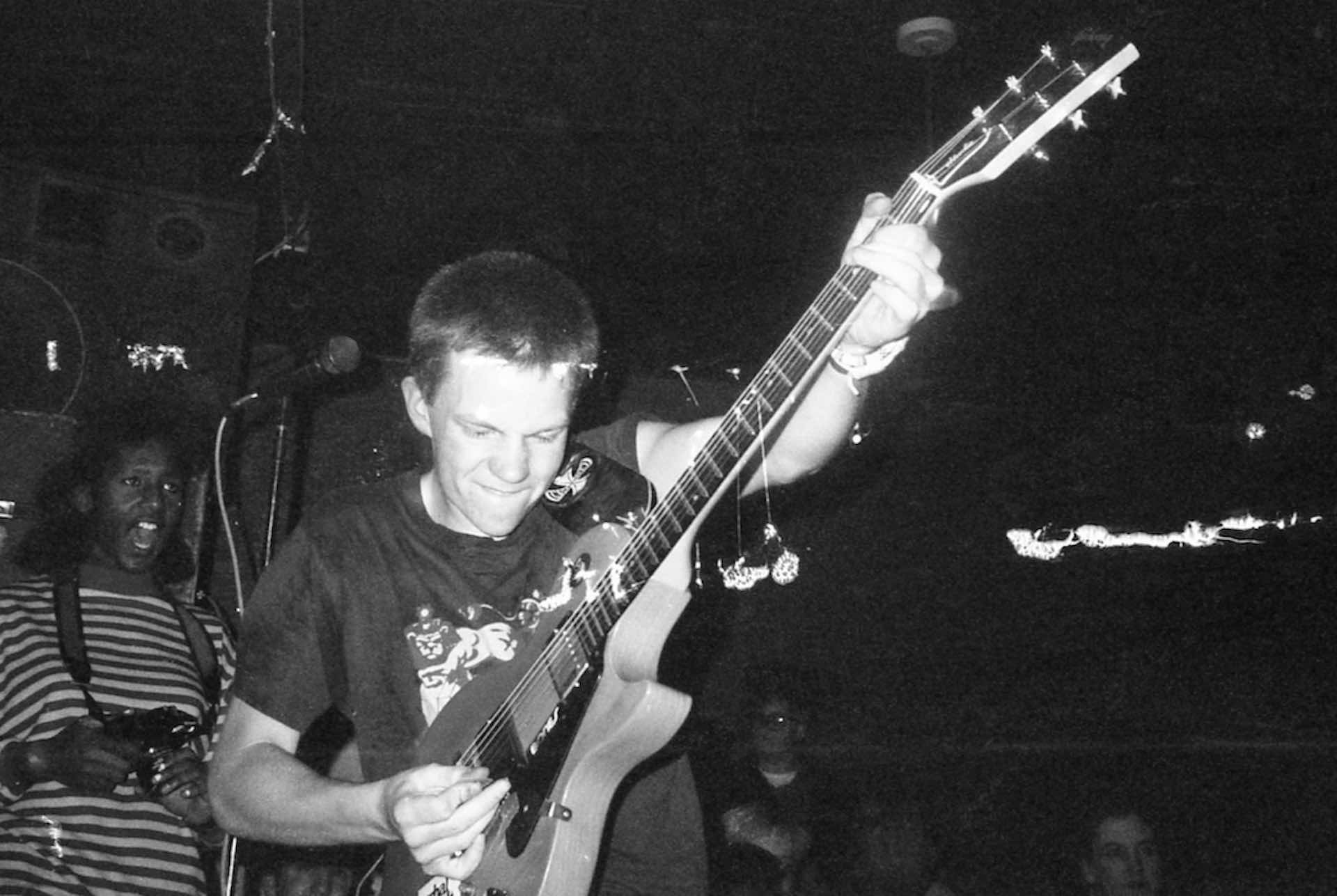 [LOOKING BACK: Jesus H. Christmas, I loved this band. Imagine my thrill when an interview request was responded to by Pete Chramiec, their guitarist. Dude wrote such thoughtful responses to my lame questions. He'd been asked these same questions a thousand times before, and yet he intentionally reached deep by his response, and provided answers that the questions certainly didn't merit. My admiration for Pete was cemented via his work in Rain Like the Sound of Trains -- a band which had such poignant messages. -- Mickey]

What is the current line-up?
PETE CHRAMIEC: Chris Jones (19) vocals, Pete (18) guitar, Tom Gorman (21) bass, and Chris (20) drums.
Are you all original members?
PC: Chris and I are the original members. Until, now, it's basically been considered Chris' and my band, but now with the Gorman brothers, we feel it'll be more of a common effort. They were both in a band called FAST FORWARD. 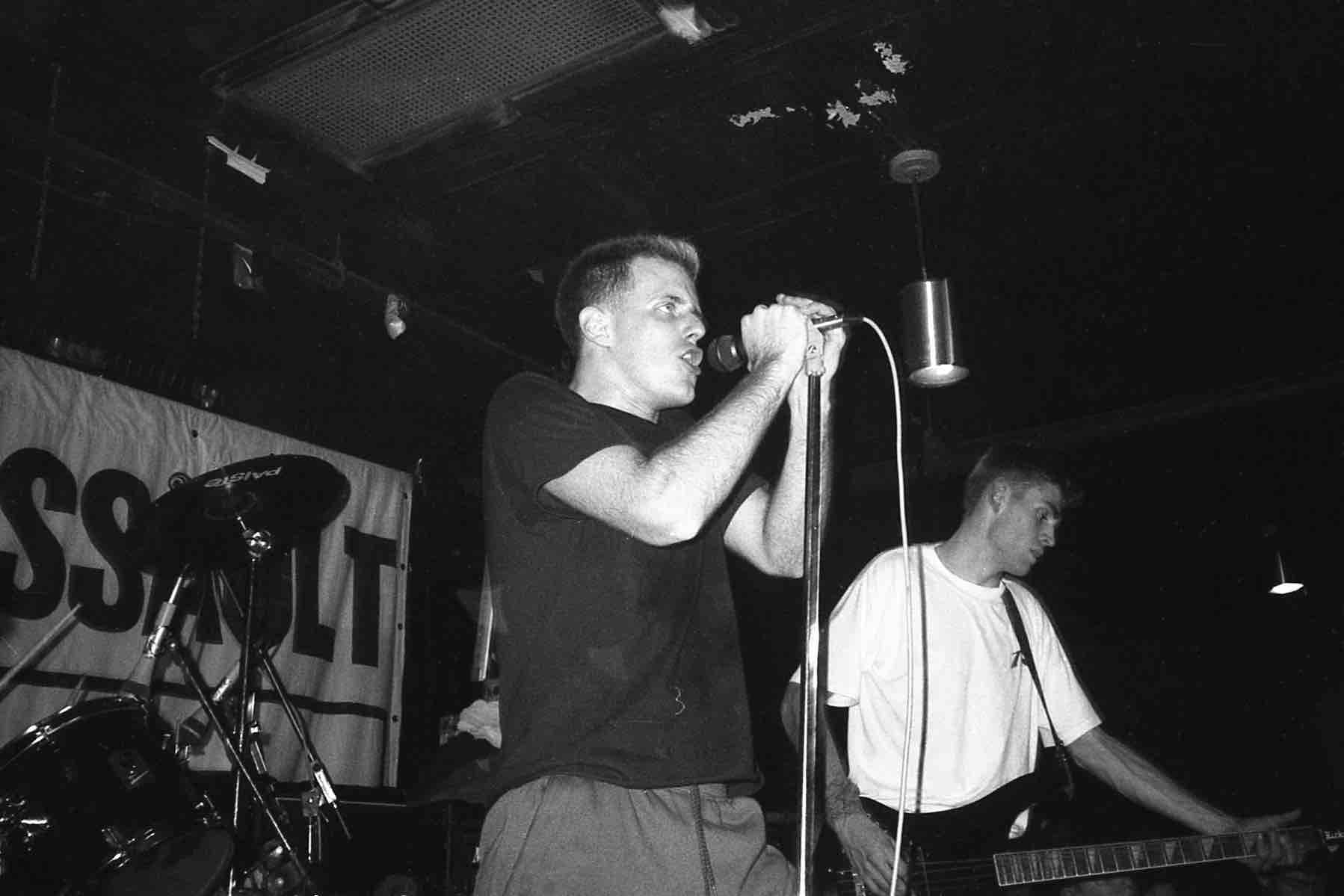 How long have you been playing your instruments?
PC: I started playing guitar the first time we practiced, four and a half years ago. Same with Chris Jones. Tom and Chris Gorman have been playing for similar amounts of time.

Who writes your lyrics and music?
PC: Chris writes almost all the lyrics. I contribute now and then, but he does just about all the lyrics. The music has always been a combination of everyone. Even if I would write a whole song, Dylan (our old bass player) would often throw something into it to help it out or vice versa.

What bands influence you or do you listen to?
PC: We all have pretty diverse musical tastes, ranging from BOB MARLEY to METALLICA to BAD BRAINS (my fave). A wide musical background is important. Hardcore isn't the only music around. You're missing out on some great artists if you don't search for other music you enjoy. Generic hardcore comes from people who only listen to hardcore. For us it's important to try to be as original as we can. We try to make our own kind of music. Fast or slow doesn't matter. It's the feeling we get from our music and our message and trying to share it with others is what matters to me. We've been trying to create our own sound, and believe me, we have. Our next record, which we started recording last weekend, should show that.

How many tours have you done? Where have you played?
PC: We've done two U.S. tours, playing about 65 places in the U.S. and Canada.

What city was the best?
PC: It's hard to say. On our last tour, I enjoyed almost every city we played. To some bands, only the number of people at the show or how much money is made matters. For me, I think the most important thing is always playing your best and trying to communicate with the people you're playing for. Not so much by preaching in between songs, but through your songs. That's what hardcore's about. Usually our smaller shows are better. They can be more personal. When you get some packed hall with hundreds of people it makes it harder to communicate. Like when we played in L.A. There were about fifteen hundred people there but it seems like we're only playing for the people up front. I don't mind playing the big ones now and then, but they have never compared with the feeling you get often you play in a small town that really appreciates you. 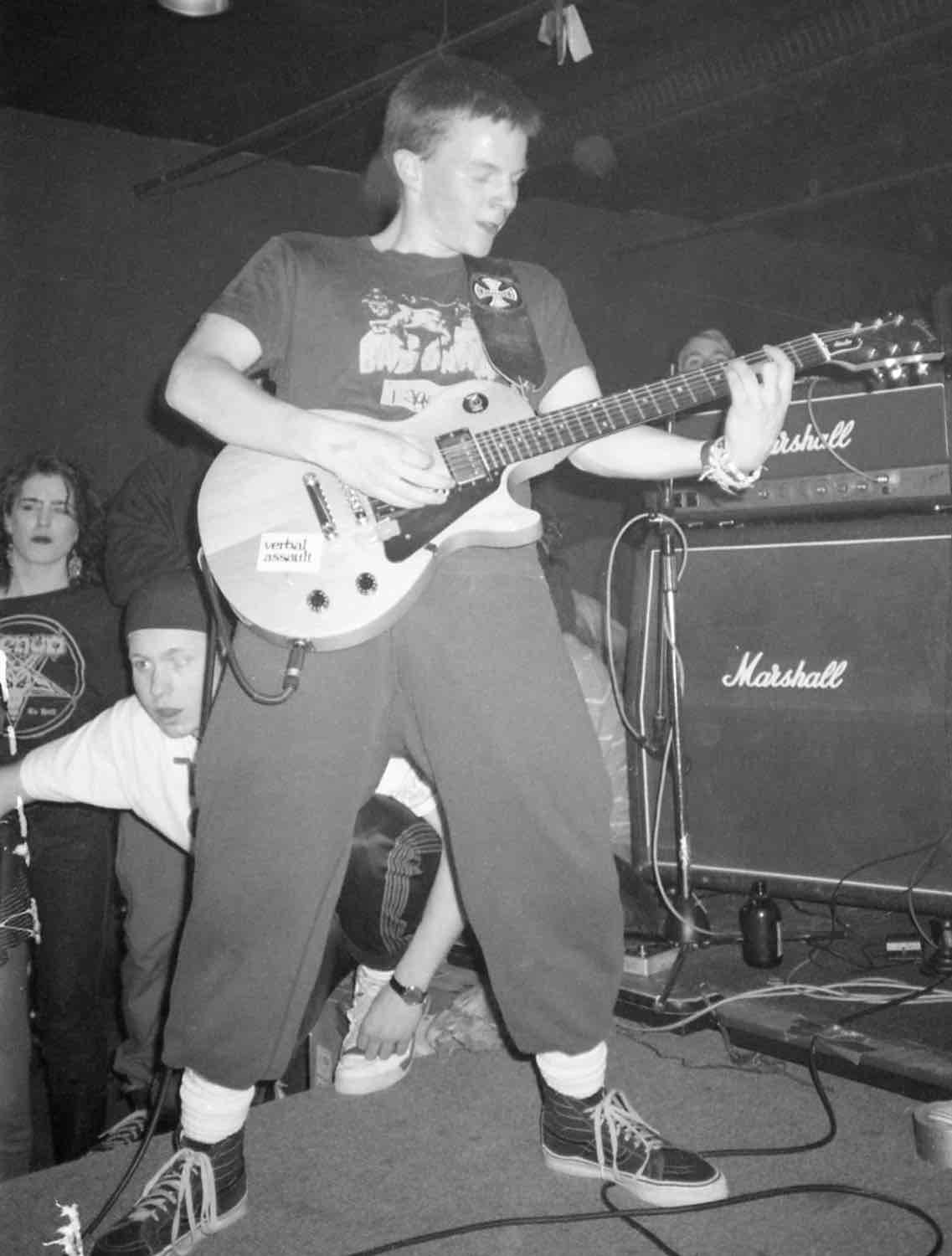 Who do you like to play with the most?
PC: BAD BRAINS

Are you satisfied with your "Learn" LP? What would you change?
PC: "Learn" was a good indication of what we were about a year and a half ago. I wouldn't change anything, just keep moving on.

What can you tell me about the new LP?
PC: We started recording it last weekend. So far it sounds really good. The songs have a good mix and good variety to them. It's very powerful and has captured what I feel is our own sound. Label, title, etc. are all undecided. 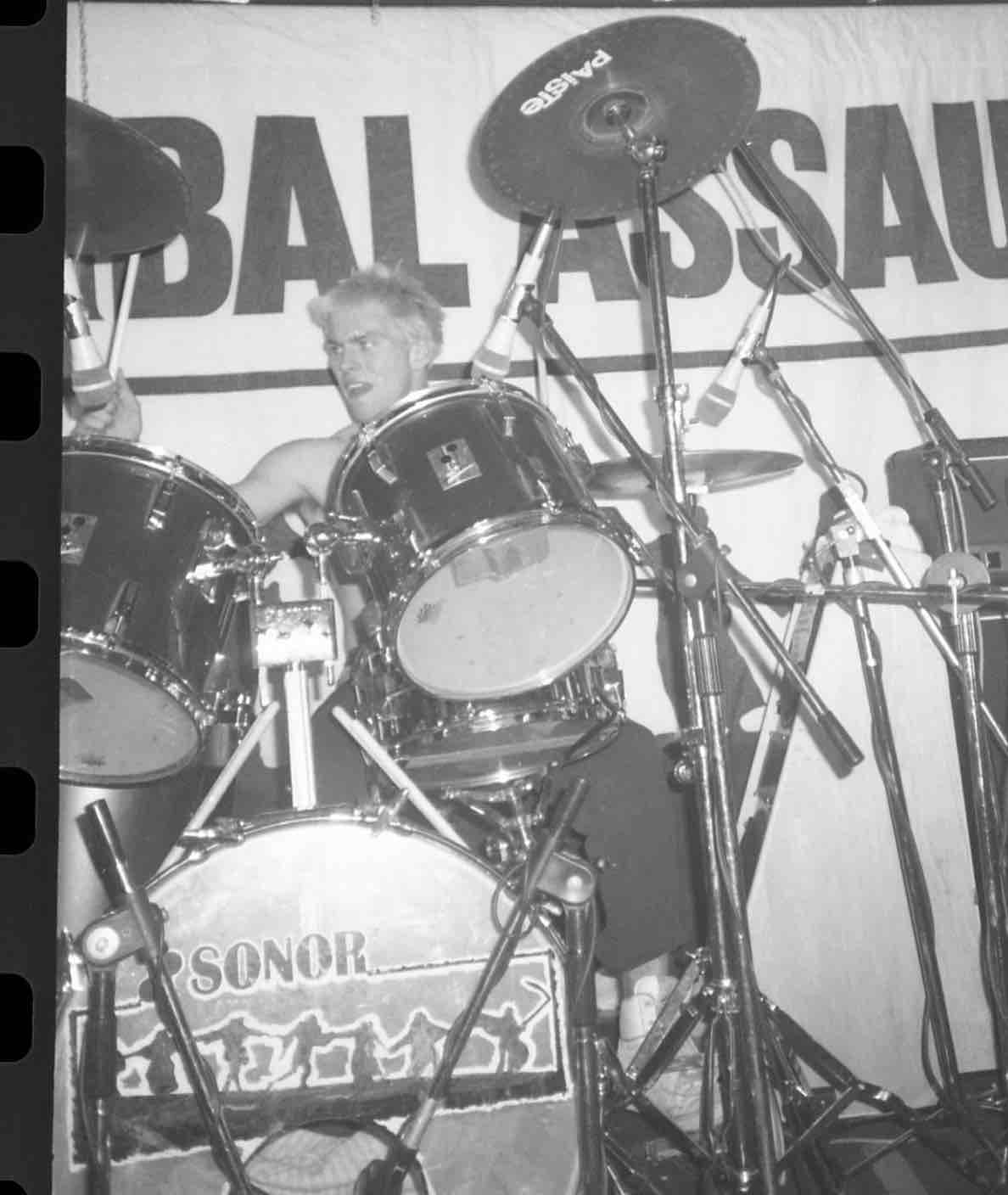 How has your style chanced throughout the years, mainly between "Learn" and "Trial"?
PC: With time our musical tastes and talent have gotten wider and better. We've used that not to "go" metal or mainstream, but to develop into our own band. The new songs are just better.

I read you're not straight-edge anymore. Do you look down on the Straight-Edge movement now? What are you opinions on it?
PC: We've never been a big S.E. band. I've always considered myself S.E., but some time ago I realized that it really doesn't matter what you consider yourself, it just matters who you are. I don't drink at all. I don't smoke. I don't eat meat, but that's just who I am, not because I could be called straight-edge.

There's a hell of a lot more to people than if they drink or not. Just because I find no good in it doesn't make it right to condemn others for it. Too much emphasis bas been put on whether people drink and do drugs or not. Caring about other people drinking is like caring if other people eat junk food or watch TV. Worry about yourself. If drinking becomes a problem for somebody, then they could use your help, not your labels.

Does VERBAL ASSAULT take up most of your time, or is it work?
PC: Chris and I have always dedicated ourselves to the band. It's the most important thing to us. We work full time because it's become very expensive. We bought a van, and we're always buying new equipment. But our lives revolve around the band. Now with Tom and Chris in the band, we have four people who are willing to put everything we can into the band.

Would you ever sign to a major label?
PC: Maybe. There's benefits to major labels - promotion, better distribution, the works. But to me it's just business. I don't think bands that sign to major labels "sell out". Selling out is compromising your morals and integrity for money. If we were offered some kind of big deal with full artistic control we'd consider it. But I'd rather be on a good independent label. Big business is big money, and with big money comes greed and dishonesty and those are two things I avoid at all costs.

What do you think of metal finding its way into hardcore and vice versa?
PC: I think it has its good points. I've met metal kids who are now into hardcore and have really opened their minds. That's cool anyway you look at it. 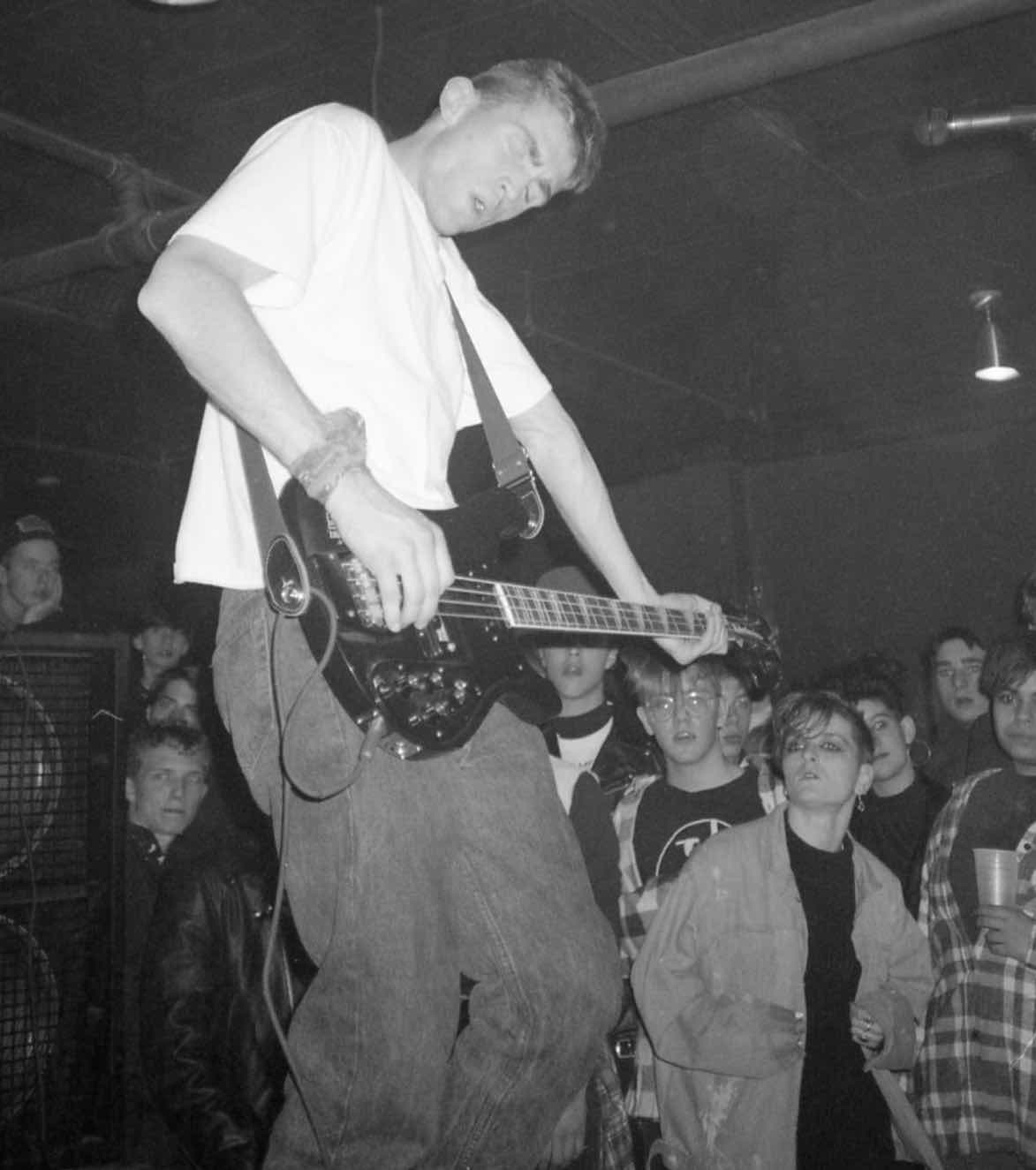 Do you see VERBAL ASSAULT staying together for a long time? Are you very compatible both musically and personality-wise?
PC: The band is the most important thing in our lives. We to take it as far as we can. Getting along with each other is a challenge, an important one. We'll go on as long as it's VERBAL ASSAULT, and when it's not VERBAL ASSAULT anymore, we'll break up or change the name or even start over.

What basic message do you want to get through with your music?
PC: It's hard to say because I don't really have a basic message to give. In general, I'd like to tell people to cooperate with others and respect each other. "What goes around cones around." We've been given brains and personalities to use to be our own selves, not for fads or to follow other people or tradition.