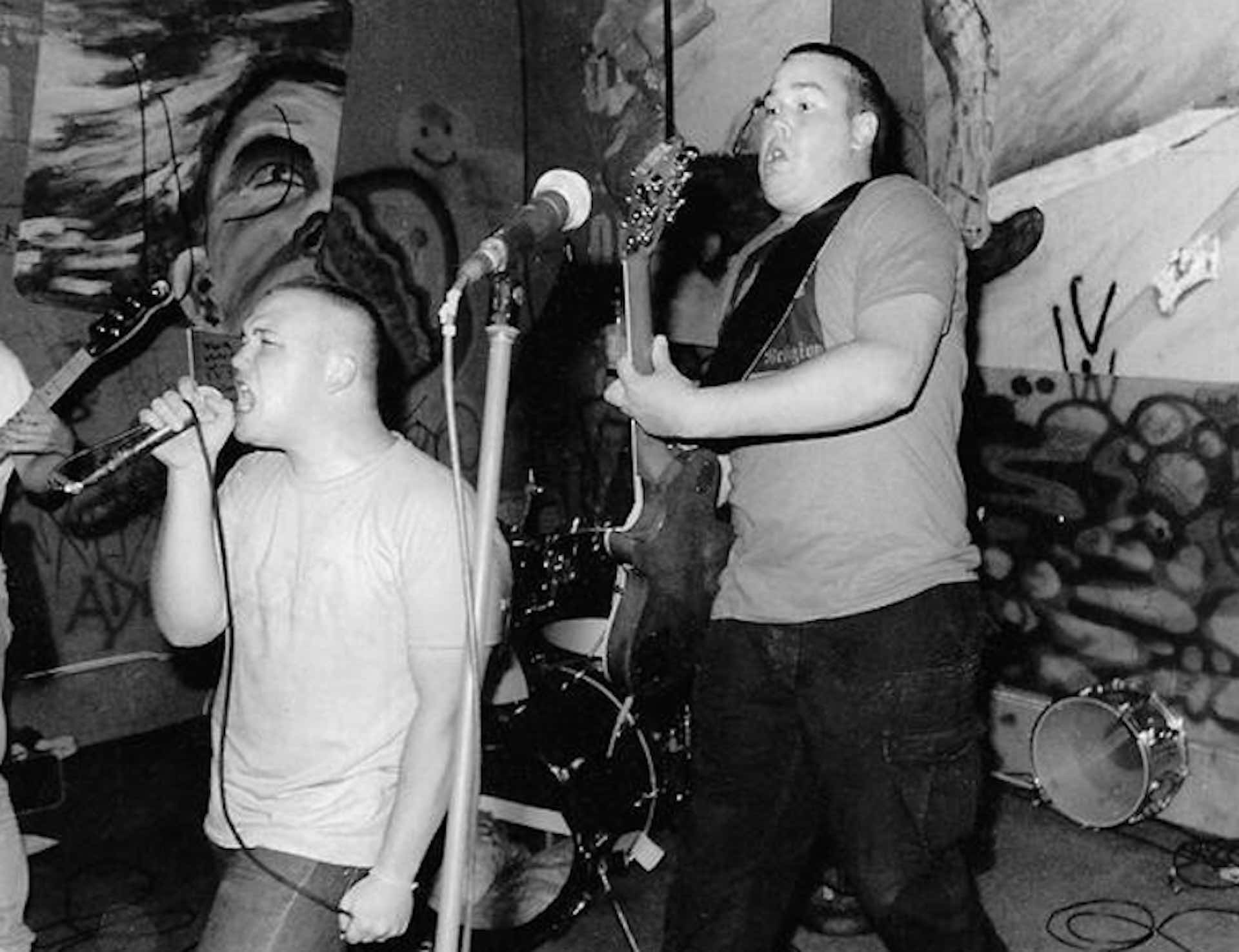 LAST OPTION is an excellent hardcore band from Mesa, Arizona. They have released two great demos which show a very bright future. Aside from being talented musicians, they are also politically active and well-educated in national and world events. We spoke with guitarist, Dave Schaller.

How long has the band been together?
We formed in February of 1986. We put out our first-tape, "Survival Phenomenon" in October of 1986. Our new demo, "Feel The Fight", was done on February 14, 1987.
How did LAST OPTION form?
Well, we've known each other for many years. You see, we were all extras in the movie "Saturday Night Fever". We all grooved on the groovy disco sound. So we formed a band which Donna Summer sang for. Well, disco was dying off and punk was getting big, so we changed our style and had Jeff (tambourine player) sing and we're still waiting to get rich and famous.

Are any of you students? How do you handle going to school and playing in the band at the same time?
Yes, Audrey is in high school, I'm attending Community College, and Jeff is starting college in the fall. Personally, I have no conflicts with school and the band. We practice 2 days, a week until 6 PM, then I stay up until about 1 AM to do my homework. My first class isn't until 10:30, so it's no problem.
Would you like to make a career out of the band?
No, I certainly don't want to make a career out of the bade. It's not that I'm not dedicated, but I don't condone people making a living off of hardcore, unless they've dedicated their life to it, i.e. Ian MacKaye. But I will definitely do it [the band] as long as I can. It's been four years now, and I'm more involved than ever. 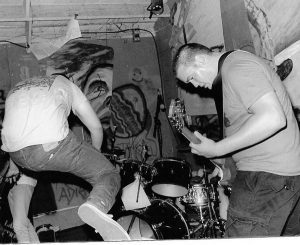 What is the biggest problem in the world today? How can it be changed?
I would say that the biggest problem in the world is ignorance - because any problem, be it racism, sexism, Fascism, nationalism, nuclear power, nuclear war, etc., can be overcome if the people examine the facts and educate themselves. I also think that community education, handing out leaflets, etc., is also effective. For example, if we hand out leaflets on U.S. intervention in Nicaragua, and it spurs someone's interest and they try to find out more.

What messages do you try to convey in your music?
As we stated before, we try to convey the importance of education, the threat of nuclear war, etc. But all of our lyrics are on a personal level. I know Jeff tries to stay away from cliched lyrics, just as I do when writing.

Where did you get the name LAST OPTION?
The name means, in general, progression in any sense. When backed into a situation, the only way out is to move on or progress to better things.
Are you politically active? What are some of your beliefs?
Yes, we are. As a matter of fact, we are going on a civil rights march and demonstration tomorrow in Phoenix. Politically speaking, we believe in Anarcho-pacifism ideals. I believe it is impossible for change to come about while government exists. I believe that the key lies in education. People have to learn that they can make a difference. I'm currently majoring in Political Science in college.

What bands, have influenced you?
I'd say some of our influences are FINAL CONFLICT, RIPCORD, BLAST, BGK, DON'T NO, FALSE LIBERTY (who have broken up, with members forming INNER STRENGTH - Ed.), HALF OFF, HERESY, AMERICA'S HARDCORE, SSD, CFA, CONFLICT, and EXTREME NOISE.

What have you been doing lately?
Not a whole lot, besides practicing and writing new stuff. We played-a show with MDC and DESECRATION a few weeks ago.

What is the scene like in Arizona?
Unfortunately, at the present time, the scene is split. Due to Scott Hinkle, there are the apathetic fashion punks who go to snows to smoke and be cool and watch bands who supposedly don't talk about their uncaring attitudes. Then there's the Mason Jar crew who go because they care and believe in alternative. Unfortunately, with the exception of us, YOUTH UNDER CONTROL, and DESECRATION, all the other bands would rather make money and play Scott's shows that charge $8-$10 to get in, rather than make less and have lower prices. Especially A.R.R., who are managed by Scott Hinkle, are contributing to the split in the scene. Also, there is a gang called Phoenix White Pride that hang at Prisms and have put a few people in the hospital.

Which show was your favorite?
That's kind of a tricky question because a lot of them were good. It was good at Prizms when it first opened, but our last show there was the worst, not musically, but mentally. We had a flag with a slogan hanging up, and Hinkle came up and demanded we take it down 'cause he's a patriot and he was offended by it. We said fine, we won't play. But he said if we didn't he'd stop the show.

What do you feel about the current crossover of hardcore and metal, both musically and lyrically?
Well, especially in the Phoenix area, there's a lot of conflict between us and them. I don't know. I like some speedmetal, like SLAYER, METALLICA, PHANTASM, and NUCLEAR ASSAULT. But I don't think the two should bridge together. Only problems would stem from it. The hardcore scene has enough problems as it is. It would never work here. There would be too many conflicts. They think violence, sexism, and drugs are cool. We don't. There would be too many fights. We must first unify the hardcore scene, then move on.

Where's your favorite place to slay?
The Metro or the Mason Jar, not just for the fact of the superior sound and stage, but for the fact that that's where the kids have the most control over situations. If there's a
fight, the kids break it up.
Where don't you like to play?
There's another club called Prizms where the owner wants complete control. He calls the shots, and we don't play that game. Many local bands, including LAST OPTION, have refused to play there and many personal conflicts have arisen from the club's existence. It has definitely hurt the scene.

What are your plans for LAST OPTION?
We're hoping to be touring this summer and we're going to record hopefully in August. Then we'll be playing all winter and going out to the East coast next summer. Just keep playing and meeting new people as long as possible.

Any final words?
I would like to thank our good friends in DESECRATION, Y.U.C., FINAL CONFLICT, PTL KLUB, and HALF OFF. I'd also like I to thank Walter Glasser, Tim Yohannan, Martin Sprouse, and the rest of those MRR commies (Ha!) and everybody else who has written to us and supported us. I also want to thank you for doing this interview. Your zine is super.

Write to LAST OPTION and check out their demos, or just drop them a line to discuss Anarcho - pacifism or current events.