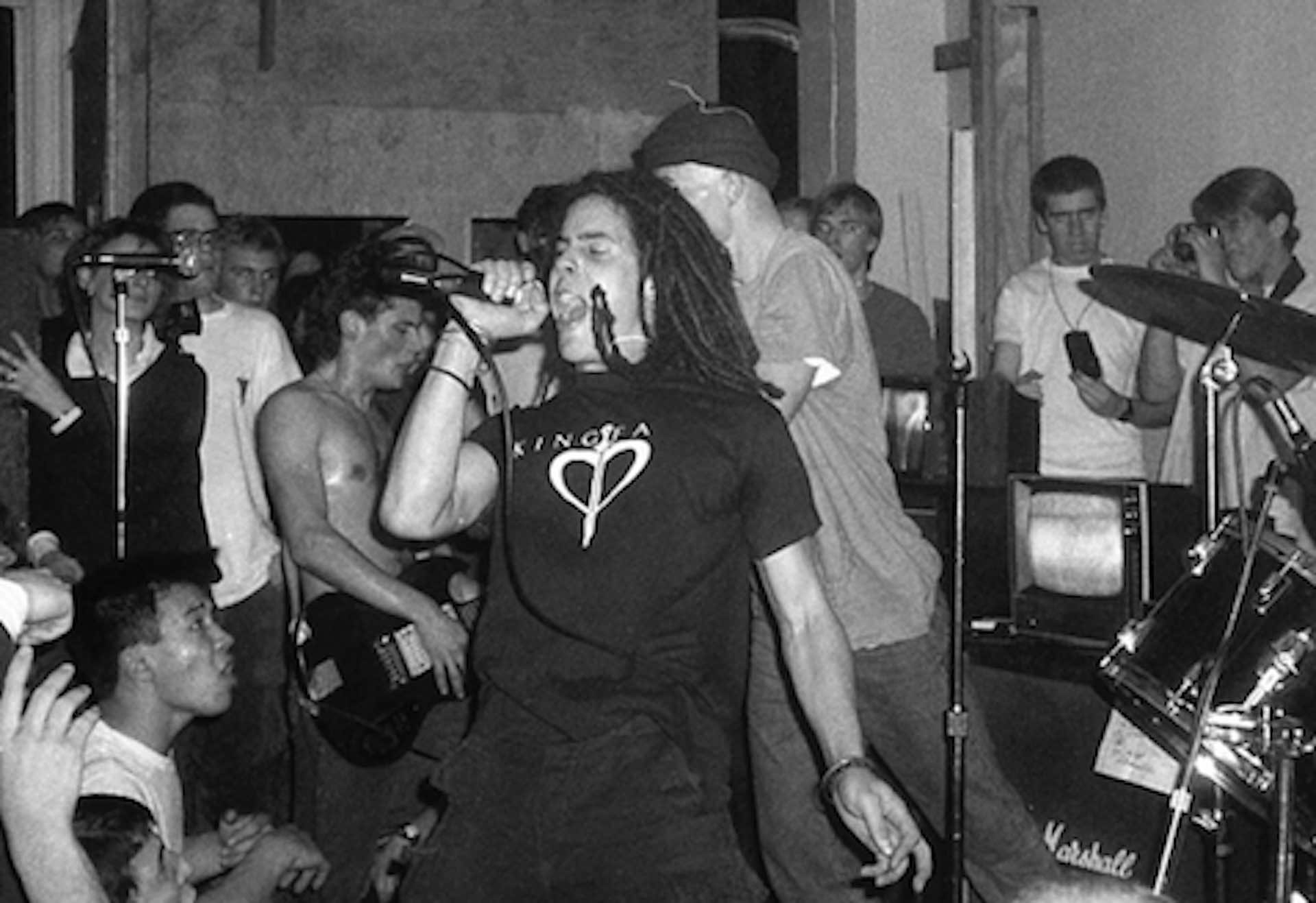 [LOOKING BACK: Wonderfully, the Soulside men took up their instruments and began playing shows again around 2018, released a book chronicling their time together , and even -- AMAZINGLY -- released a 2020 7" EP on Dischord Records called "This Ship". The creative spark is clearly still there, and in late 2021, recorded a record at J Robbins' Magpie Studio in Baltimore. We're positively giddy with excitement! -- Mickey] 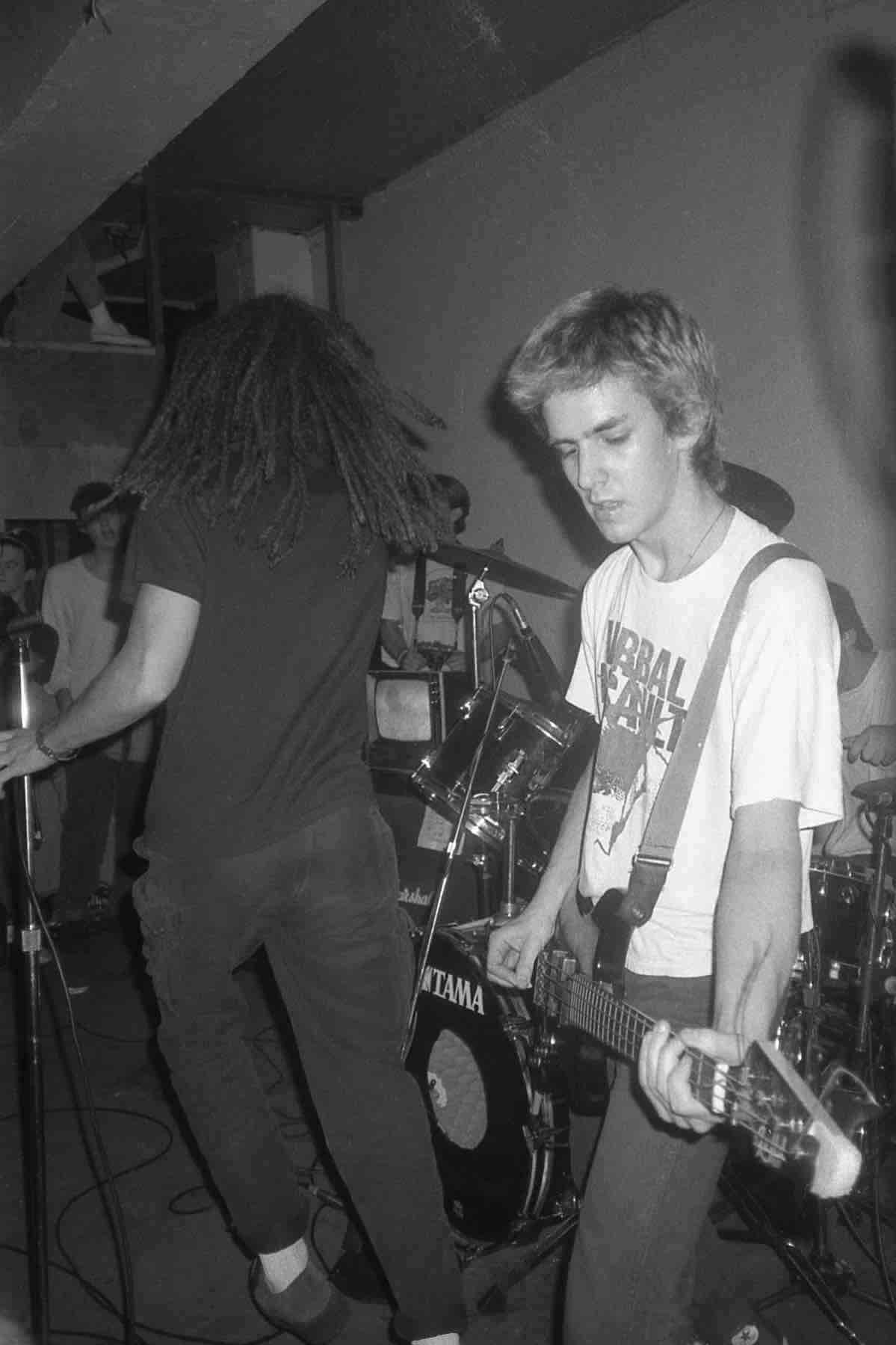 Who's in SOULSIDE?
Johnny Temple, 22, bass. He's a Libra. Scott McCloud, 21, guitar. He's a Libra as well. Oh - I think I missed their birthdays this year. Alexis Fleisig, drums, 22. I'm Bobby Sullivan, vocals, 22. I'm an Aires. I think Alexis is a Capricorn. We all went to the same high school - Wilson High School - and we were all friends. We got a band together called LUNCHMEAT. We played around then we put out an album ["Less Deep... Inside Keeps" on Sammich Records]. Just as the album came out, Chris Thompson, our bassist, quit. We wanted to keep going and he was in IGNITION, so we got Johnny to play bass. There were no hard feelings. Johnny was a really good friend of ours, so it was a good transition. He added a lot to our band. A lot of "new wind," so to speak. And then we put out "Trigger," and you know the rest.

Where'd the name SOULSIDE come from?
I was sitting around one day and saw the word "soul" printed on a page somewhere. I like the idea of soul. I just thought of SOULSIDE. It just came up in my head. It doesn't really mean anything. It can if you want to though.

"Pearl to Stone," off of your first album, meant a lot to me personally. What was the inspiration behind this?
"Pearl to Stone" was written by Scott. It's pretty much a love song, but not in the classic sense. I think that it was written with those kinda feelings in mind. I always felt that it was about getting down to business and taking care of the shit you have to do. "Gonna set a pearl to stone... gonna let it rain." You know, take care of everything. The rest of our lyrics are mostly by me, and I just write about whatever's on my mind. Hopefully in the best way possible. Unfortunately, people will misunderstand lyrics a lot of the time. I think that's too bad, but no matter what you write, someone's bound to take it the way that they want to take it.
Have you been pleased with your releases?
We did our debut album a long time ago. Back then, I loved it. Right now, I still think it's good, but I don't love it anymore. "Trigger" came out, and I still really like that. "Trigger" has sold, I think, twice as much as the first record. We have the 7", which I still like. And that has sold almost as much as "Trigger." I'm definitely happy with the way everything came out so far. No regrets, of course. 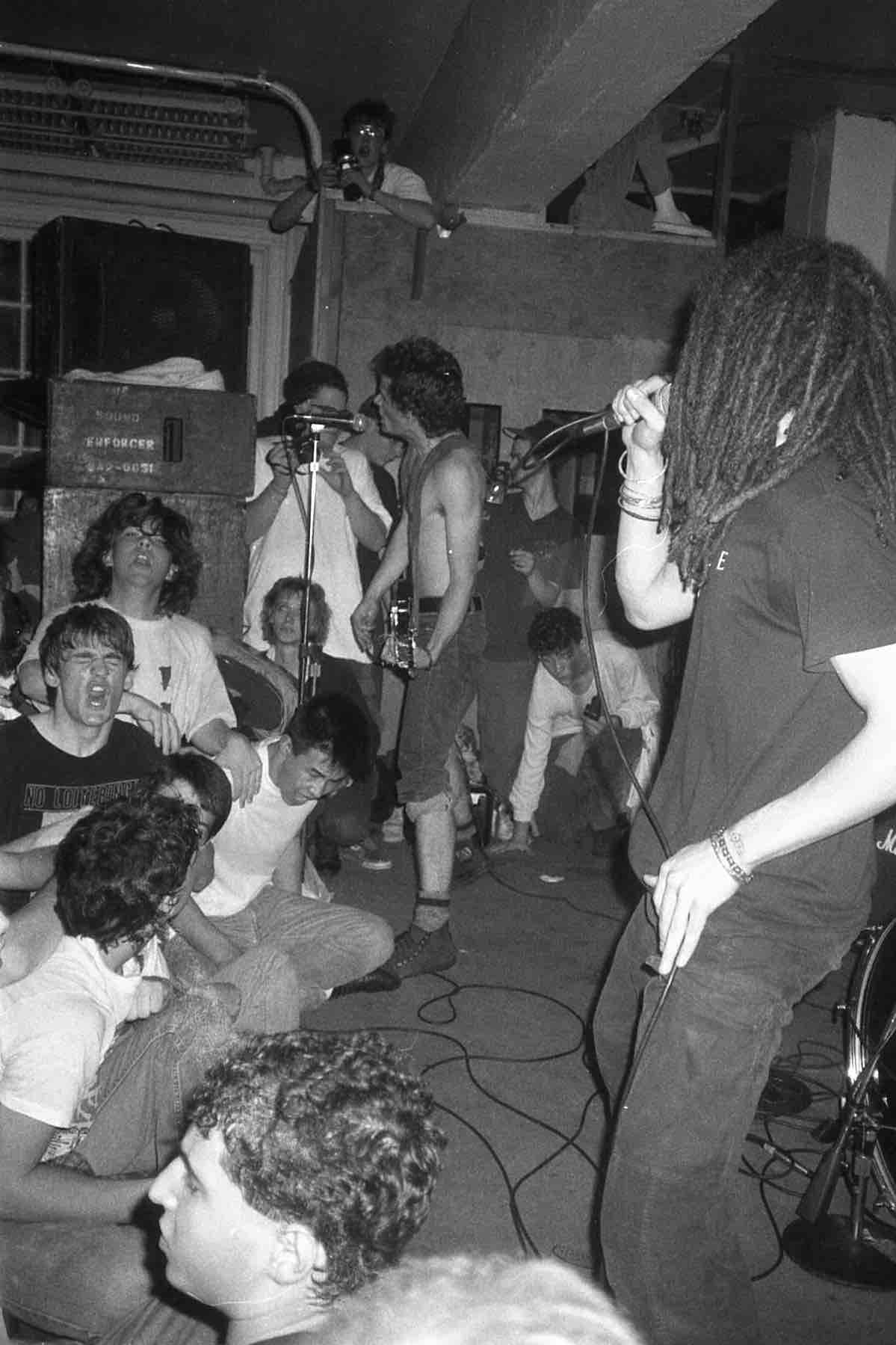 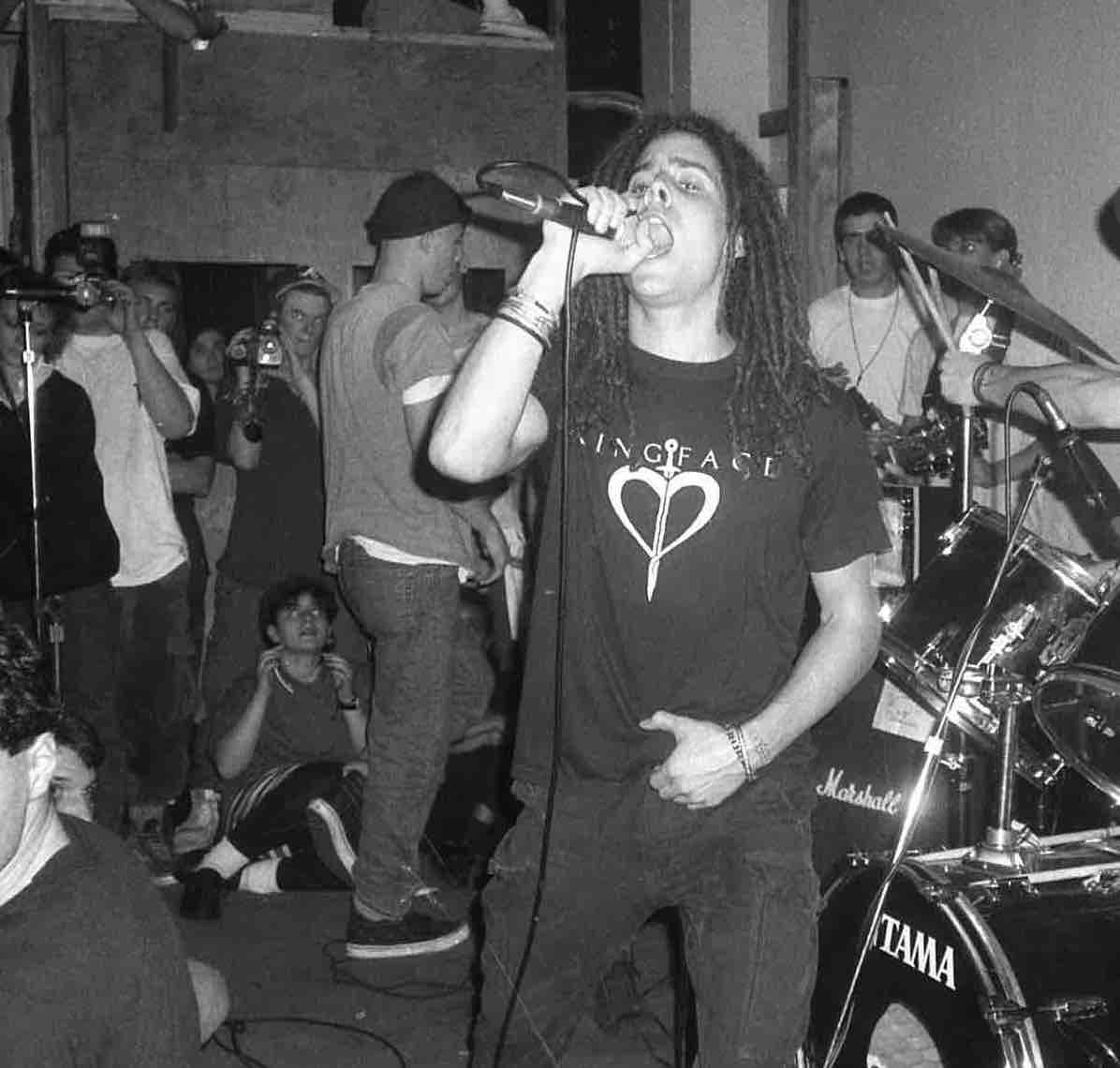 What's your next release?
We have a new album coming out in November on Dischord [which became Hot Bodi-Gram - Mick]. Twelve songs. We recorded all of the songs in Europe in a studio over there, so it's going to sound a little different than the normal Inner Ear thing. There's also going to be a CD released with "Trigger," the 7" and the new album. That's if the Fugazi CD works out. That's the trial.

How did your recent tours go?
We went on a U.S. tour for two months, which was really good, but I dunno... It was our third U.S. tour, so it was kinda the same as always. We only had a two and a half week break, then we went to Europe for three months. That was incredible. We played almost 60 shows. We went to 16 different countries. We played five shows in Poland, a show in Germany, a show in Yugoslavia, two in Spain... we went to Austria, Switzerland, Norway, Denmark, Holland, Belgium, France and I'm sure I'm forgetting some. We recorded at the end of the tour. 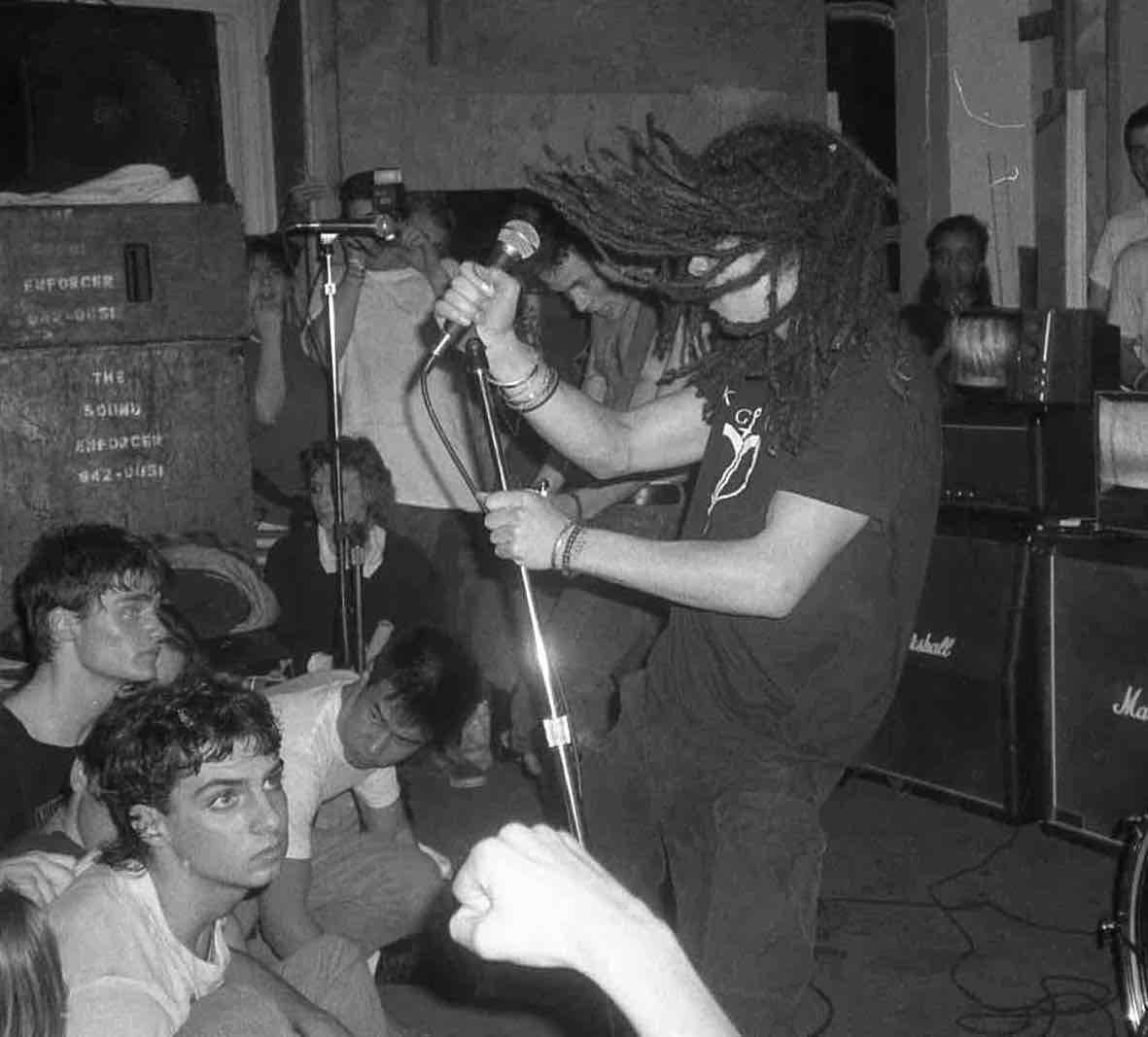 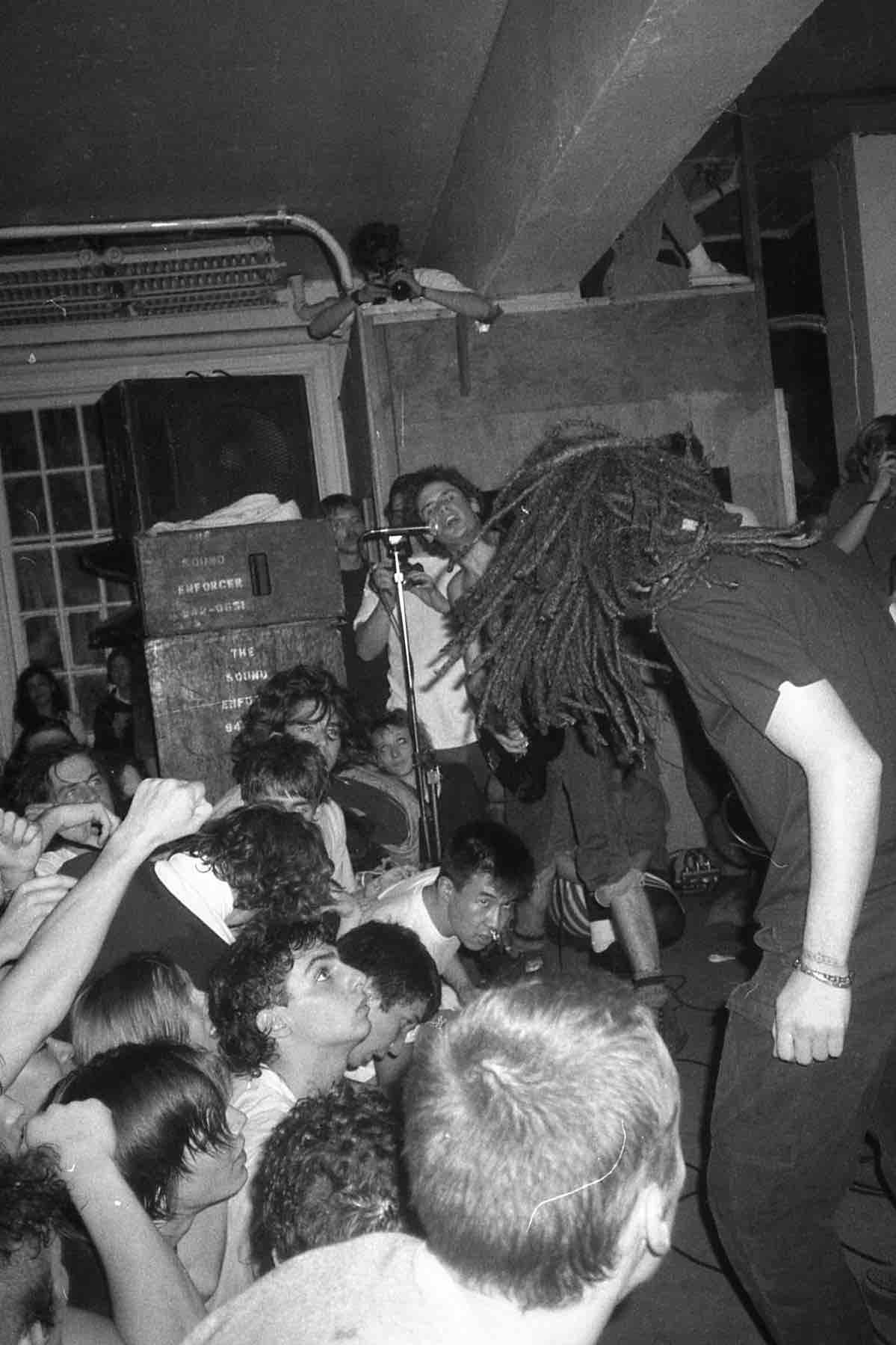 D.C. seems to have a closely-knit group of creative individuals - I'm talking right now of musicians. Is that a fair observation?
There's definitely a strong scene in D.C. Most of the bands know each other. We don't necessarily hang out together, but we definitely get along. There's some differences of opinion, but... I think the D.C. scene is great I've lived in Boston and their scene is definitely different, they have much more of a "tough" kinda thing. If you just check out SLAPSHOT you know what I'm talking about. But at the same time the bands get along. They just have a different approach to performing.

Being from Washington, D.C., the "birthplace" of straight edge, what are your feelings on it?
Let's see... There was a time for about a year that I was straight as an arrow, but I was never straight-edge. Because the last thing that I want to do is give someone else another label to apply to me and/or my music. Once people start doing that, if you do something different, they don't understand, because they expect you to cater to that label.

Straight-edge, I think, is an important movement. Unfortunately, if s been getting a little commercialized, kinda crazy. New York, I think, totally exploited it. Which is too bad, because now when I hear the words "straight-edge," I think of New York instead of D.C., which is what I should think of it. And when I think of New York straight-edge, I don't take it that seriously, because it seems like a total teeny-bopper scene. It seems to me that most of those kids don't really have a choice. They've never really had to deal with drugs or al¬cohol on an addictive level and so they don't necessarily know what they're talking about. I think it's great to say no and to start out by just avoiding drugs because, of course, they're bad for your health. I wish straight-edge never went past D.C., 'cause then I wouldn't have any bad feelings about it. I think the way that Ian approaches straight-edge is the way that I pretty much approach my life as well. I mean, he's a vegetarian as well, which I definitely think is an important part to the straight-edge thing. Now you have these kids in Boston, where vegetarianism has absolutely nothing to do with straight-edge, and that's the thing. And that's what's fucked-up with the label thing. D.C. kids and Boston kids follow the same label - straight-edge - but there's like a strong disagreement about the vegetarian side of straight-edge. So, it's just another label. 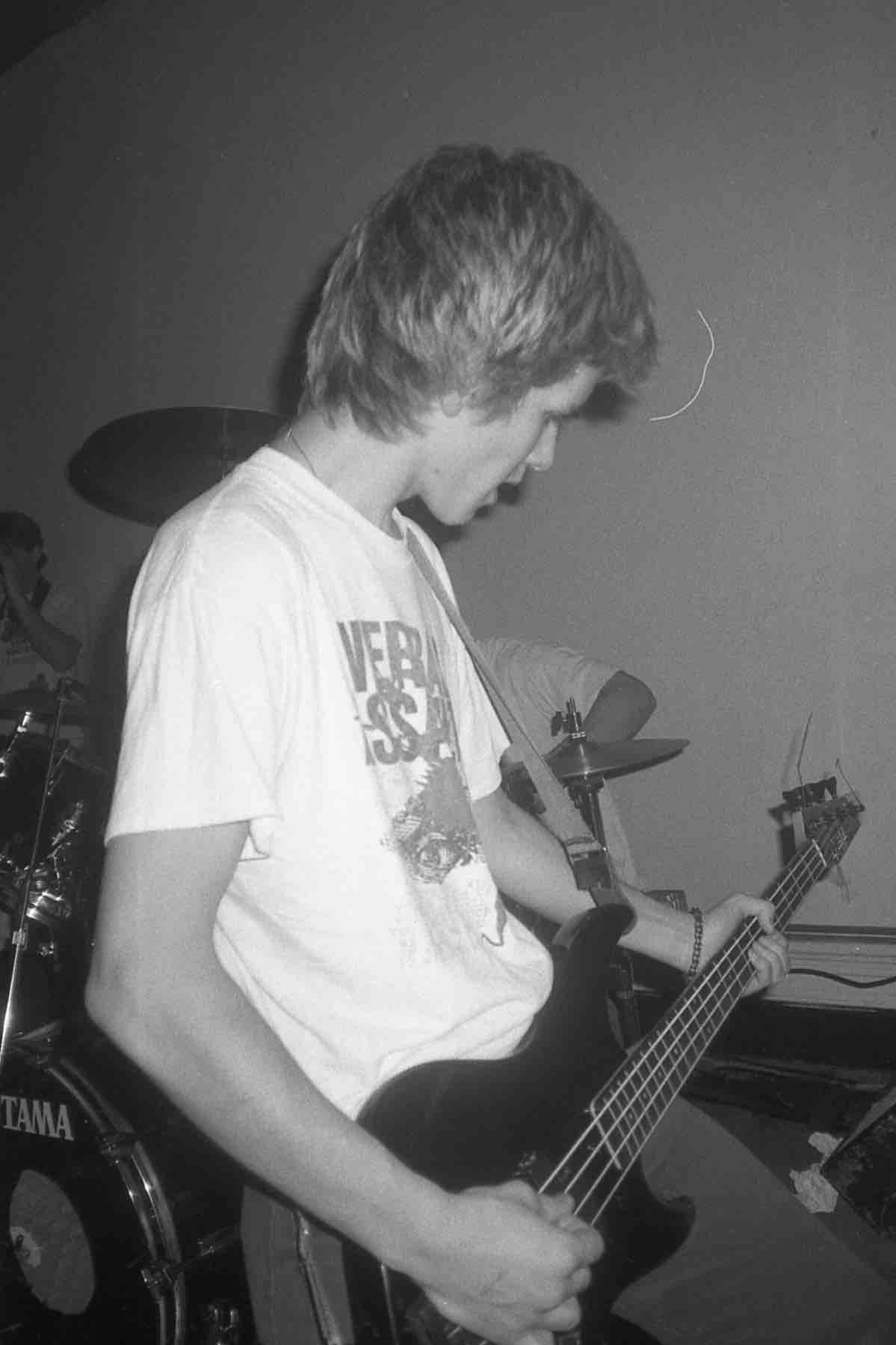 And I think personal choice in life is very important, especially when it comes to avoiding certain things, like alcohol and other drugs, or whether it comes to boycotting certain corporations when you don't agree with their philosophies. I think the problem with straight-edge is that a lot of kids see it as the answer to this "radical" side of them but may not go any further. I wish they would some time take that step into looking deeper to other kinds of politics besides personal politics. 'Cause once you start looking into world politics, they become personal politics. That's actually sort-of the evolution of our lyrics. Everyone's written personal politics, but as the years have gone by, there have been certain things which I have felt personal about that I admit I didn't feel personal about before: vegetarianism or other types of stuff. But if s definitely something I wouldn't want to push on someone else because if s definitely a personal choice. I never listened to anyone who tried to tell me to become a vegetarian. It was only once I started to realize that side of the coin that I started listening to those people. So, in other words, labels are labels. I try not to even call myself a vegetarian.

What's next for the band?
Well, we have that new album coming out. We're taking a long, long break right now. And we may or may not be playing when we get back. It depends on how we all feel. I think we all must reflect on what we've learned. Really concentrate on whether we want to keep doing it... Listen to a band called THE STENCH from Salt Lake City. Check out VERBAL ASSAULT's new stuff. And buy SOULSIDE records.