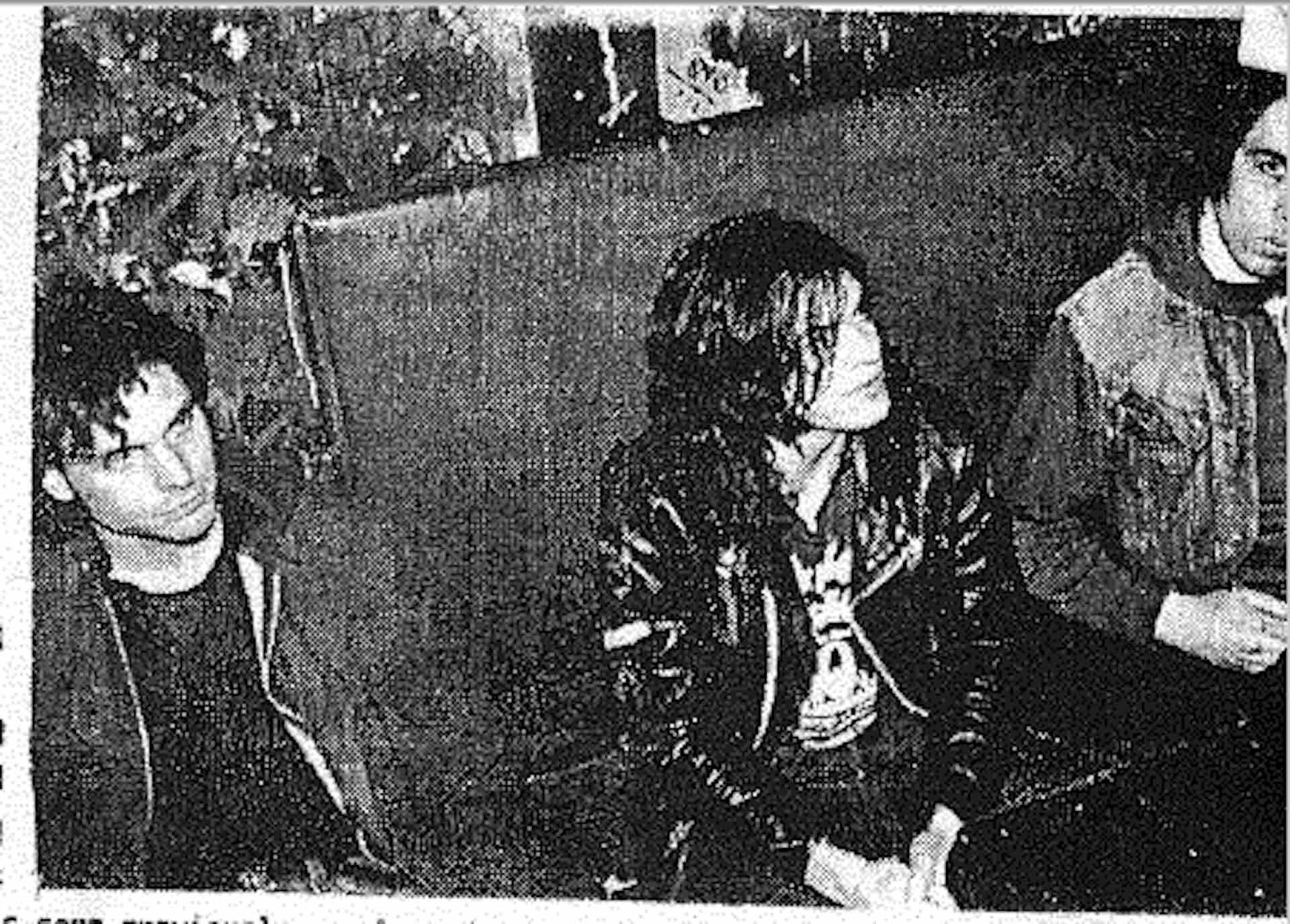 [LOOKING BACK: Listening to PRONG again, they don't have a sound that really stands out anymore, but that could be that the thrashing that sounded fresh has been reduced to background noise by the countless "nu-metal" bands churned off the major labels' assembly lines. In any case, this band had already started to enjoy some success yet were more than willing to pass some time with our humble zine. Also, they recently re-formed around one of the original members and are recording and touring again. -- Tony]

PRONG (prong) n. 1) any pointed projected part 2) a unique trio from New York who play an original blend of hardcore, metal, and industrial sounds, consisting of Mike Kirkland (MK) on bass and vocals, Ted Parsons (TP) on drums and background vocals, and Tommy Victor (TV) on guitar and vocals.

How long has the tend been together?
MK: One year. Tommy and I started writing songs a couple of months before Ted joined the band.
How did the band form?
TV: Well, we had some songs, and we got Ted to drum and arrange and then it took off. Ted and I had jammed before I met Mike.

What has PRONG been doing lately?
MK: Recording our next release. It's going to be available this fall (October or November). We're really excited about it. All the songs kill. 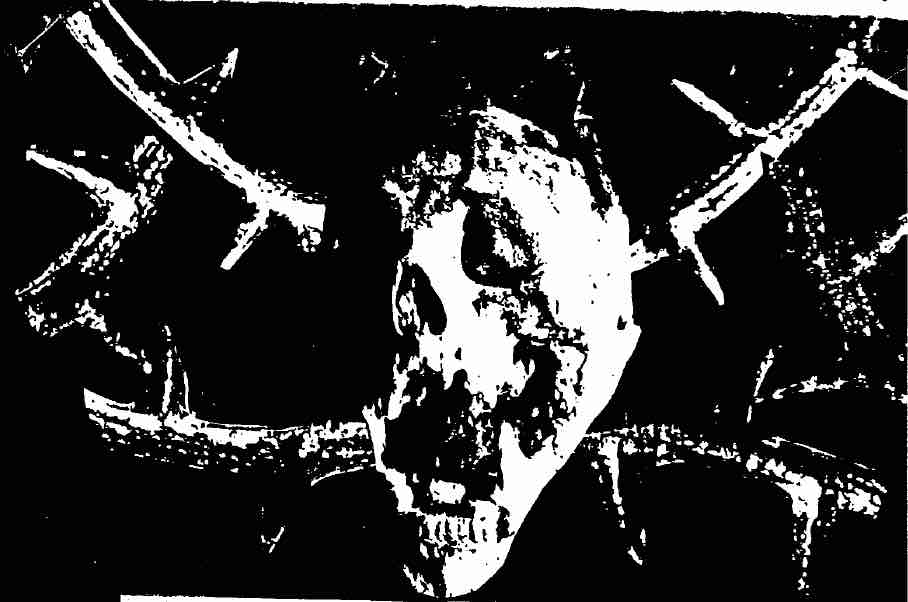 What bands have influenced you or do you listen to?
TV: Early SABBATH, LED ZEP, STOOGES, PISTOLS, KILLING JOKE, BLACK FLAG, COC, MOTORHEAD, and some death metal too. All of us love METALLICA. My fave guitar players are Angus [Young], the Nuge, and [Tony] Iommi.
TP: ZEP, MOTORHEAD, VENOM, SLAYER, NEUBAUTEN, John Bonham.
MK: All kinds of stuff from the STOOGES and VELVET UNDERGROUND to DIE KREUZEN and METALLICA.

Are you pleased with your debut LP, "Primitive Origins"? Would you change anything?
TV: We're very happy with the packaging, production, and the music on it. There's nothing Me would change. We only wish that all the records had the British mastering job. It's better. So keep an eye out for the European version, available on import. The cover is a bit different, too. Again, better quality.

Why did you choose the name PRONG?
TV: We just think it's original. It doesn't have YOUTH, DEATH, SLAUGHTER or ANGEL in it.

What is the scene like in your area of New York?
MK: We're generally happy with the scene. No complaints, no problems. I think as a band we try not to align ourselves with any certain faction. Our music is unique, uncompromising, and personal. Our audience seems to be made of people who enjoy music and not into just making this or that scene.

The lyrics on the album are kind of obscure. Could you elaborate on some of your lyrical themes, or what inspired them? For example, "Disbelief"?
TV: Someone who suddenly changed on me, and therefore put me through changes, made me write this lyric. But it's also a disclaimer of everyone else's perceptions of how things are. It professes individualism in a way. 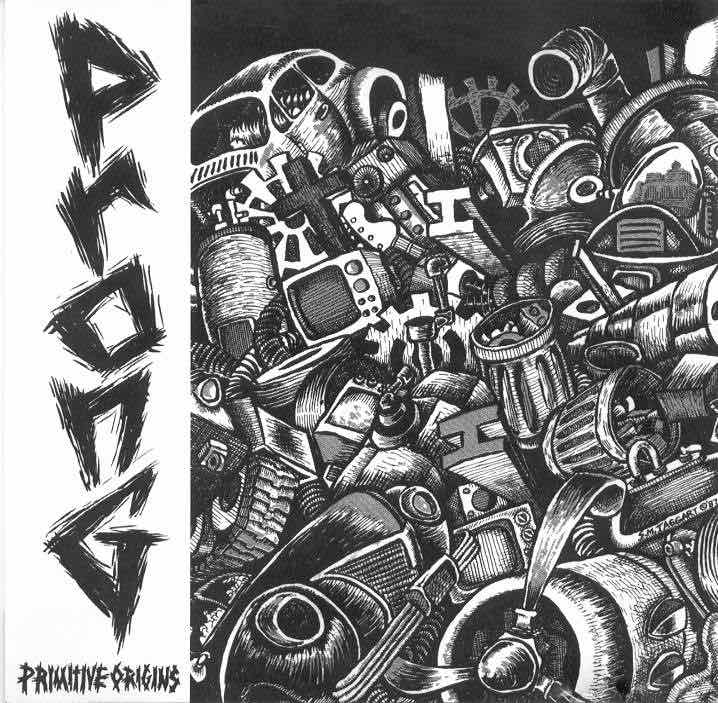 "Cling To Life"?
TV: This one probably sums up the "Primitive Origins" continuity the best. It discusses irony and apathy, but is more descriptive. Everything is increasingly media-controlled and the images we're getting are more and more distorted. It responds to how we, as a mass public, are being manipulated into thinking hopeless and less in control of our lives than we
can be.

"Denial"?
TV: I was influenced by seeing others and myself coping with this concept of subculture. People are constantly confused about what directions to take in modern-day "lifestyles". I still think there's something a little more decent in refusing television or whatever images of how we should live. Although it's confusing (and a mess), the Spartan lifestyle is where it's at. (The Spartan lifestyle was brave, hardy, stoical, warlike, severe, frugal, and highly disciplined - Ed.)

"Dreams Like That"?
MK: This one is a specific bad dream I had, but I tried to take it a little further into everyday life. It's sort of a warning.

"In my Veins"?
MK: I know it sounds ridiculous, but it's a love song. Not a traditional love song obviously, but a love song nonetheless. Any reference to drugs is discouraged, but I think that the listener should have the final say as to what leaning a given song has.

"Climate Control"?
MK: This lyric is somewhat influenced by the George Orwell "1984" concept of how our (meaning the mass public's) thoughts, feelings, and most of our natural leanings, are constantly being persuaded by very well thought-out tactics. It's nothing new, but it's more evident, at least to us, in the 80s.

"Persecution" (instrumental)?
TV: There are no lyrics to this one, but the title was chosen because it's a fear tactic. A key word that appears much in the media.

What do you do in your spare time?
TV: Writing music and lyrics, and handling business for PRONG.
MK: Basically the same. Putting up with the city, etc...

In your opinion, what's the greatest album ever?
TV: Well, since PRONG is a three-pronged entity, we have to name three: the first KILLING JOKE record, STOOGES' "Raw Power" and BLACK FLAG's "Damaged".

What will PRONG be doing next?
TV: We're in the process of mixing down our second record a full length LP, and we're in the midst of writing and rehearsing for a third. A tour is being lined up for the end of this fall and local shows will be played in the immediate future.

Any final comments?
TV: Send artwork - it might end up on the cover of our second album.

There it goes. PRONG's debut LP is recommended for all music fans. Keep an eye out for future vinyl releases, and check thee out if they pass through your neck of the woods. They're much different than all those other thrash/hardcore/industrial bands (if there are any others!) If you live in New York, you nave the privilege of attending their select live performances, so do it!