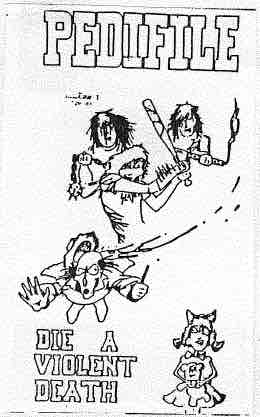 PEDIFILE — “Die a Violent Death” demo tape
PEDIFILE is a five piece thrash metal band from Mesa, Arizona. They formed in May ’86 and started off doing SLAYER and EXODUS covers, while opening for bands like ZNOWHITE and DARK ANGEL. But now, PEDIFILE is headed in an all original direction and hope to get signed soon with this demo. PEDIFILE is into heavy, technical music with heavy vocals and ear-piercing screams. All of this is displayed on the demo.
This ain’t easy, but here goes. The music on this four song tape is played really well — good, tight, technical thrash. And most of the KREATOR-type vocals are pretty cool. But there are some extremely high shrieks that just sound out of place. Plus, I really can’t get into their lyrics. It should be noted that the song “Pediophiliac” delivers an anti-child molestation message. So do their t-shirts, which depict a child molester being beat up by a bunch of thrashers. Overall, this demo is slightly above average. Interesting. The tape costs $4, lyrics included. For $6 you get the tape and a PEDIFILE t-shirt, which Chris informed me LARS ULRICH of METALLICA wore on MTV and claimed to be his favorite. [TONY]