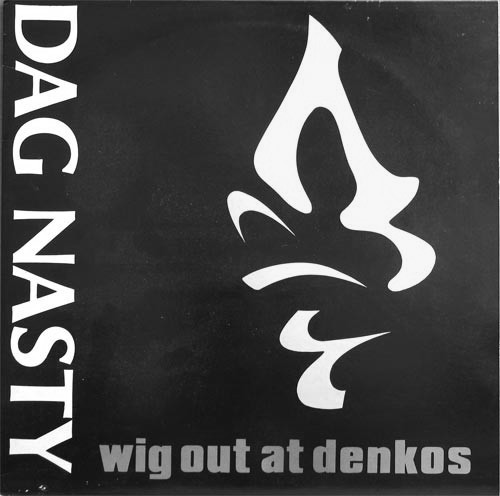 DAG NASTY — “Wig Out at Denko’s” LP
Remember way back in issue number one during the review of DOGGY STYLE’S “Last Laugh” LP, I commented what a waste it was that two fine musicians like Brian Baker and Doug Carrion were playing in a band like that? Well, my wishes came true – both are now in DAG NASTY (the drummer and Brian are the only original members). The “Last Laugh” is a laugh compared to DAG NASTY’S new LP. It’s absolutely incredible. It may not be too popular with DAG NASTY fans (although I’m an avid one!), as for the most part, it’s not as thrashy. No power has been lost here — he intensity remains, and the same vein of lyrics, although not as vague as on the “Can I Say" LP, is evident. It’s an ambitious effort, as they delve into a slower, more musically oriented sound. The old sound can be found too, as heard in songs like “Simple Minds,” “Safe,” and “Dag Nasty”. The LP, as a whole, requires many listenings for one to really get into it. While doing it, try to forget their first LP. It’s a different band, who has put out the best LP so far in 1987. (Dischord) [MICKEY]