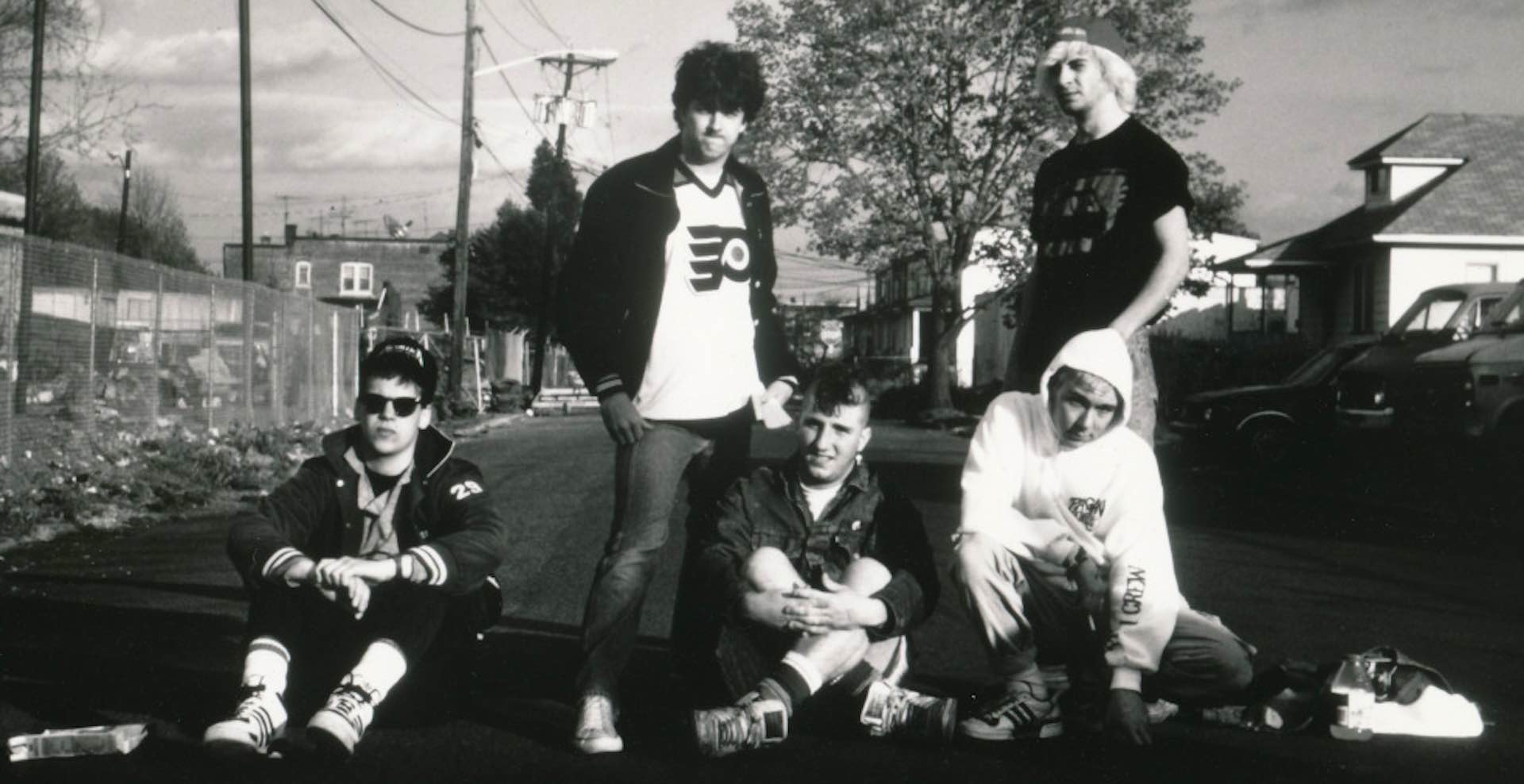 LOOKING BACK: Have no idea why this was a mail interview, considering that Pagan Babies were a hometown band. Their bassist, Mark, was a fixture in the Philly scene, being the mogul behind Plus Productions -- among whose multi-million unit sellers was the "That Was Then, This is Now" compilation EP (RUIN, FOD, SCRAM, and ELECTRIC LOVE MUFFIN) and the Grammy-award winning "Discpan Hands" LP, which too featured Philly bands. I'm sure the other band members were a scene fixture. But since I was admittedly on the periphery rather than in the middle of the scene, I kinda didn't really have any connections. Anyway, the times I met the dudes of Pagan Babies, they were always righteous blokes to me. Not a wanker about them, guv'ner. -- Mickey

With the breaking up of RUIN, PAGAN BABIES have become the most popular band here in the Philly scene. Earlier this year, they released an EP on Positive Force Records, and have recently been playing some major cities on the East Coast. They're making their mark on the national scene, and hopefully more people will get into their music a unique combination of '87 hardcore with the raw energy of '77 punk. Here's an interview with this hot band:
Dan: rhythm guitar
Eric: lead guitar
B-boy Bruce: drums
Mark: bass
Mike: vocals 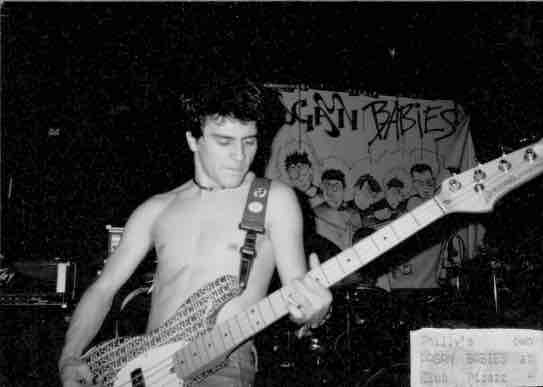 What previous bands have you been in?
DAN: The answer is… none!
BRUCE: I was in a band in New Jersey called THE UNDERACHEIVERS. But this band is much better. But these homos were never in a band before.
How long have you been playing your instruments?
MARK: A year and a half.
ERIC: Two and a half years
DAN: A year chillin'.
BRUCE: Five years.
MIKE: I've been singing since I was a child.

What influences your sound?
DAN: We all have completely different influences and everything that we listen to influences our sound.
Who played at the first show you ever saw?
DAN: For me it was TSOL and UK SUBS.
ERIC: HUSKER DU, MINUTEMEN, F.O.D., and WHITE CROSS
MARK: For me it was CIRCLE JERKS, REFLEX FROM PAIN, F.O.D., and AMERICAN DREAM at Love Hall.
MIKE: SUICIDAL TENDENCIES at City Gardens. [laughter]
DAN: Naw, he's just fessin!
ERIC: He's lying. It was HUSKER DU with me.

Are you satisfied with your "Immaculate Conception" EP?
DAN: I'm satisfied with it, but I would certainly like to rerecord it better. I think we'd all agree on that.
Why didn't you release your EP on Plus Records like you planned to do?
MARK: Because we got more money with Positive Force. (laughter)
DAN: We're money-hungry capitalists!
ERIC: Actually, Positive Force is a bigger label. They liked our stuff, and wanted to put a record out. Naturally, we're going to go to the bigger label.
MARK: We sent a tape out, they liked us, and they contacted us. We're very happy with the label. Though they could call us a little more. Hear that, Kev? And set up tours that work. 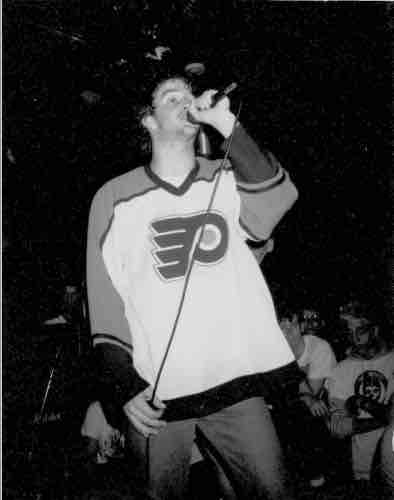 What took so long for the EP to come out?
ERIC: I don't think it took us long at all!
DAN: Not long at all. It took a long time to get it released, but that's Positive Force's fault.

Where did you play on your tour?
DAN: First of all, we didn't go on tour, thanks to Positive Force.
ERIC: We played New York City, Lancaster (PA), and Washington DC, and they all went pretty well.
DAN: Like a bowel movement on a laxative.
MARK: We were pretty much well received.
BRUCE: Especially in DC. 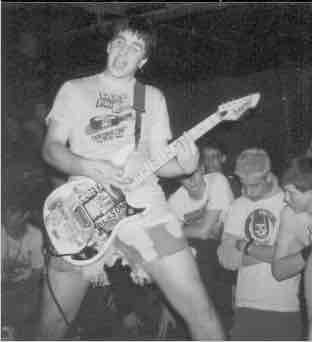 What do you think of the Philly Scene?
DAN: I think it's basically alright. But it's getting too clique-ish.
MIKE: MURPHY'S LAW. That sums it up. [referring to the outbursts of violence that occurred when they played here - see show review in TS#5 - Ed.]

There seems to be an influx of skinheads in the Philly scene. Do you think this could jeopardize it?
DAN: I don't have anything against skinheads or anything, but MURPHY'S LAW…
BRUCE: Word.

DAN: I'm not commenting on all the skinheads (and I'm sure some people are going to want to kick my ass for this), but a majority of the so-called "skinheads" don't know shit from shineola. They think they're the hardest dudes in the world. They wouldn't know what it meant to be a skinhead if it crawled up their ass and died! I don't see how an influx of skinheads could jeopardize a scene, though. By that question, you're just generalizing on the attitudes, actions, motives, etc. There are a lot of skins in New York City who are really cool the dudes in TOKEN ENTRY, KRAKDOWN, SIDE BY SIDE they support each other. Not like Philly bands, where there seems to be a lot of competition. That's bullshit, 'cause this is hardcore, not arena-rock.

Is your song "Clearing the Blur" an anti-alcohol song?
ERIC: No, it's not anti-alcohol. It's about control. If you're going to drink, have some form of control. Live your life at 100 percent. Don't let alcohol take control and mess you up.
BRUCE: Michael told me it's a reflective song, like "Sunshine On My Shoulder."

Will you have another release soon?
DAN: There's been a lot of new songs. We'll let Mark comment on this.
MARK: We have an album coming out. A full-length LP on Positive Force Records. We're going into the studio I guess in December or January. The tentative title is "Stories of Old," out by Spring.
BRUCE: Hopefully.

Anything else?
DAN: I'd like to make a last comment about THREATENING SOCIETY. I think they do a great job with their fanzine and I hope they keep it up. It's just a great fanzine. It's well done, it's well laid-out… 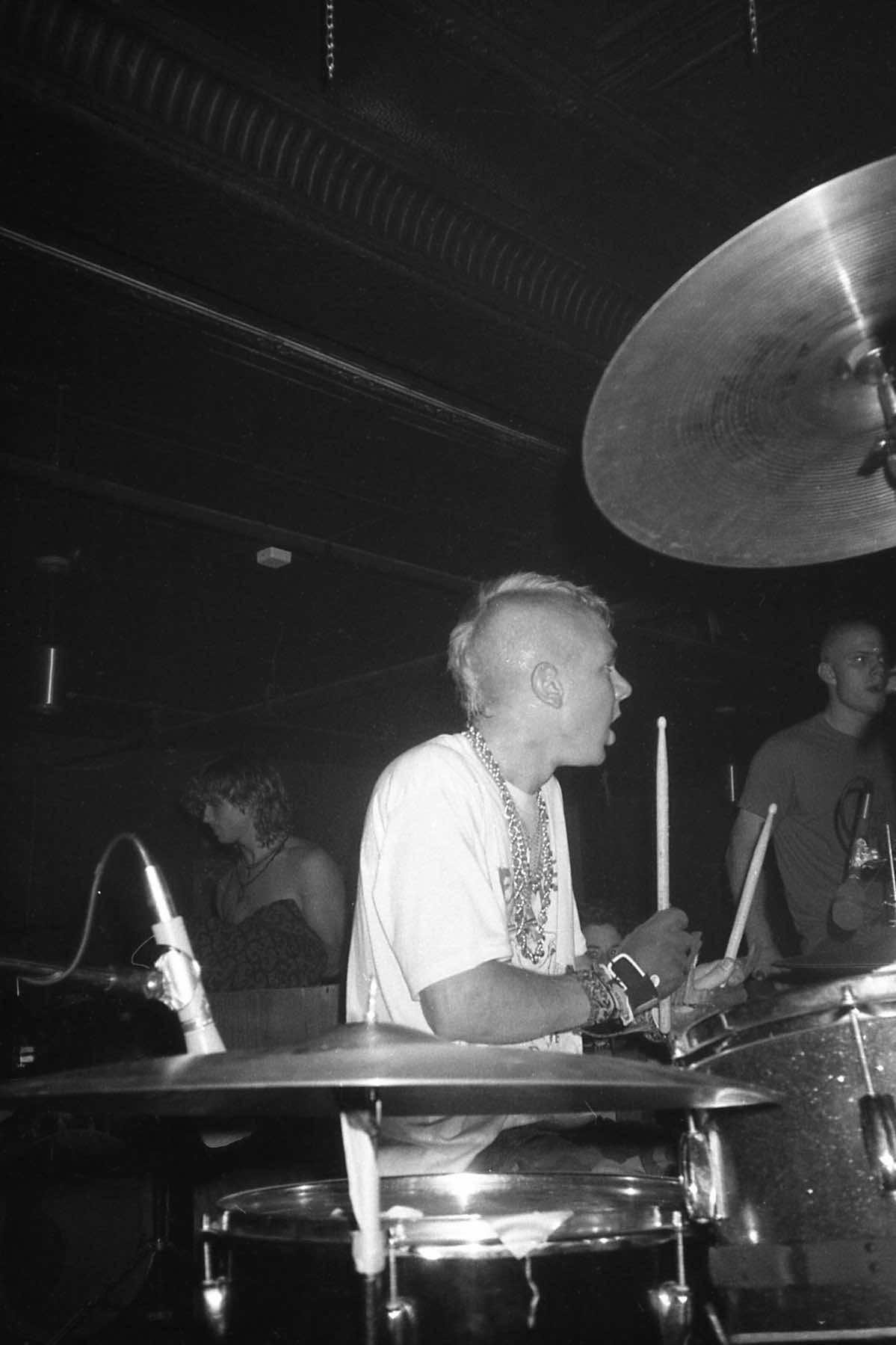 If you haven't heard PAGAN BABIES yet, get your head out of the sand and buy their EP! And keep an ear to the ground, 'cause believe us, you're bound to hear a lot more of them soon.