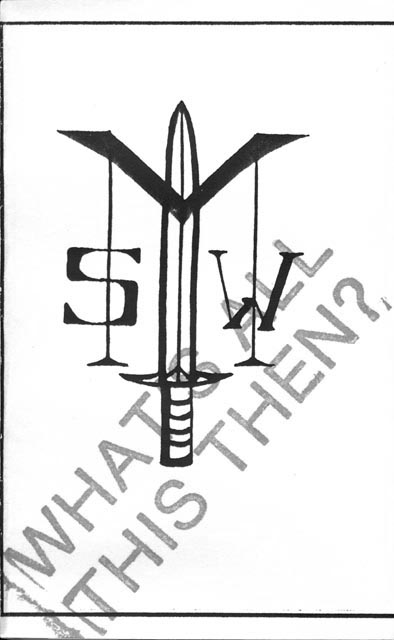 MULTIPLE STAB WOUNDS — “What’s All This Then?” demo tape
MULTIPLE STAB WOUNDS is a thrash band from Connecticut consisting of Totie Herman on vocals, Jeff Fahy on lead and rhythm guitars, Brian Duca on drums and Ian Miller on lead and rhythm bass. They’ve been around for a little over a year, and are trying to convince the world that anarchy is the only way for rational beings to live. The bassist, Ian, would also like to dissuade people from hurting themselves with chemicals.
Excellent thrash music which is burdened by mindlessly violent lyrics, especially in “Slam To Kill.” However, Ian has informed me that the new-sound is much better, in that the music is more “shredding” and the message is much more positive. The music is already very tight and technical (especially displayed in the MAIDEN-like “Call To Arms”, which is not indicative of their regular sound) and I think the addition of better lyrics which are wore reflective of their personal beliefs should make MSW an all-around good band. This five track tape costs $3 in the US, and $5 elsewhere. [TONY]