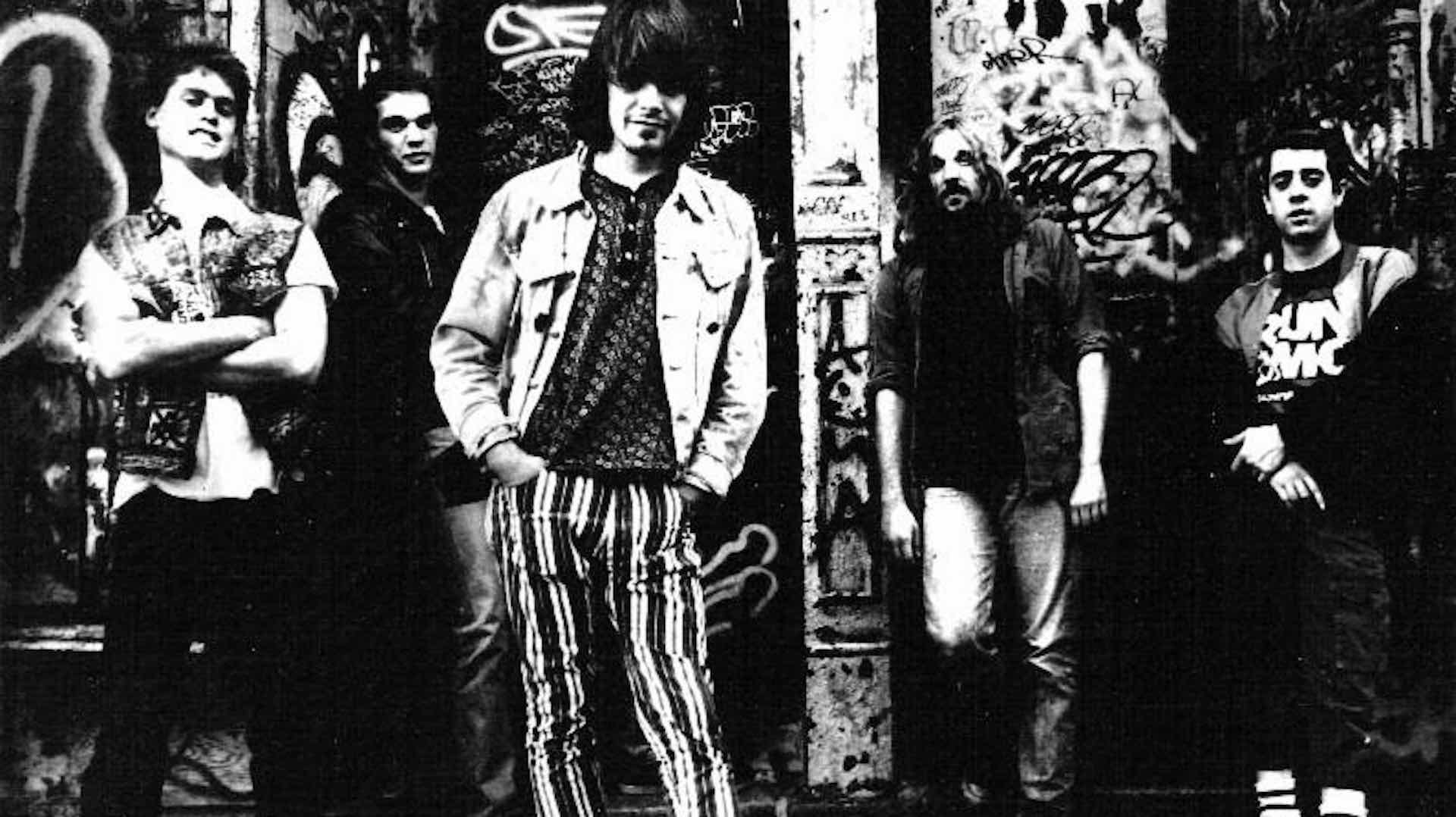 [LOOKING BACK: Though the band and their work didn't really endure the test of time, I still remember this interview fondly thanks to the candor of Joe Butcher. I don't know if was his humorous answers to my generic questions, the self-effacing way he admitted that the band name and album concept were influenced by the label's heavy marketing hand, or the fact that he was a plumber by day, this interview makes we want to dig out my old Ludichrist LP. -- Tony]

LUDICHRIST is another great N.Y. hardcore band, though they possess a slightly different sound than their counterparts. They had the hardcore/metal scene on the ropes with their highly successful demo, and then executed a perfect knock-out punch with their debut LP, "Immaculate Deception". Well, enough boxing analogies, and on with the interview. 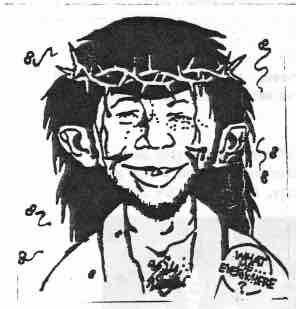 How long has the band been together?
JOE BUTCHER: We have been together for two years, with a few variations in the line-up.
How did the band form?
JB: It was originally formed by Al Batross and Mark Durnex. Chuck and Tony joined later and then Glen was added to the line-up. Mark then quit the band like an idiot, and was replaced by ME!

What has the band been doing lately?
JB: We are in the market for a new drummer.

What bands have influenced you or do you listen to?
JB: Early on, we were influenced by MDC, RUDIMENTARY PENI, DISCHARGE, and so on. But as the band grew, so did our influences, which now include AEROSMITH, SABBATH, and LOU REED. We listen to everything, basically.

Where do you enjoy playing the most?
I think everyone will agree that CBGB's is just about the best place we've played.
Where don't you like playing?
JB: There is a place in Long Island called Sundance that sucks! The bouncers are all bikers and they beat everyone up.

Are you pleased with your great debut, "Immaculate Deception"? Is there anything you would change?
JB: At first, I didn't like it, but after a while, it grew on me like a tropical fungus. If there were any change to be made, it would be to make Glen's guitar louder on "God Is Everywhere". I also think Glen should change his underwear.

Has your style of playing changed in any way since you began? In what ways?
JB: As the band progresses, we all became better musicians. 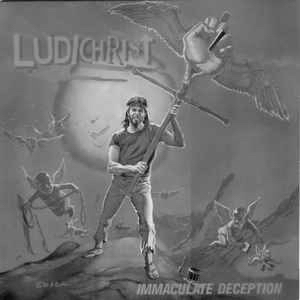 What do you think the biggest threat facing the world today is?
JB: Nuclear war, I think.
How can it be changed?
JB: I don't know if it can be changed. There are just so many problems in the world today and they just get worse and they lead to other problems. It's all very confusing. Maybe if everyone read the book "How To Win Friends and Influence People".

What messages do you try to convey in your music?
What it basically boils down to is the "open your mind" message. Also, never leave home without clean undies. Don't play ball in the house. Don't sit too close to the T.V. Eat all your potatoes. Eat everyone else's potatoes. Say "NO" to rugs.

You were scheduled to play a show in Philly (Club Pizazz) on Dec. 28 along with A.O.D. and the STUPIDS. What happened? Was there a problem with the tour bus?
JB: That was the first day of our tour with the STUPIDS, and what a day it was! We were given bad directions by someone who shall remain nameless (J.S.!) and then the alternator on the van died, leaving us stranded on the side of the road. Thank God we brought cookies.

What are your opinions on religion?
JB: Everyone in the band has different opinions on that subject. Tommy doesn't believe in it at all, but I think it's OK as long as you don't listen to idiots like Jimmy Swaggart and Oral Roberts.

What's your favorite album (by anybody) of all time?
JB: Believe it or not, one of my personal faves is the "Jesus Christ Superstar" soundtrack. It rocks! (No joke.) A lot of early Zappa. too. It's hard to say which is my favorite since there are so many.

Why the name LUDICHRIST? Any special meaning?
JB: This name was thought up by Al Batross. because he saw religion as being ludicrous. Also, if you turn it upside-down, spell it backwards, reverse every other letter, and eat 40 hits of acid, it means absolutely nothing.

What influenced you to do a hardcore-rap of "Green Eggs and Ham"? Are you heavily into rap?
JB: We all like rap, so we thought it would be cool to do one.
What are your favorite rap groups?
JB: Chuck likes rap the most, but we all listen to LL COOL J, RUN-DMC, BEASTIES, PUBLIC ENEMY, M.C. SHAN, ROXANNE SHANTE, etc.

What does the album cover drawing mean?
JB: Good question. It can mean anything you want it to. Just bad concept art, I guess.

How do you feel about the current "crossover" of metal and hardcore. Both musically and lyrically?
JB: It's fine with me, unless it SUCKS. The only thing I dislike is death metal. Why would anyone want to hear songs about death and pain, when they can listen to bands that really have something to say? The music's not bad though.

Is there a close unity among NY hardcore bands, like the CRUMBSUCKERS, AGNOSTIC FRONT, CRO-MAGS, etc... ? Do you ever hang together?
JB: We are all good friends, and we hang together at the shows. We don't hang out on a regular basis because we live far from each other, except the CRUMBSUCKERS, who we party with pretty often. 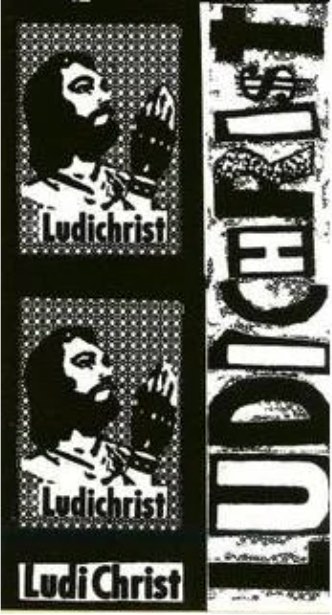 What's next for LUDICHRIST?
JB: After our next album, we are going to live on the streets and share gum with the homeless. Then we will all get sex-change operations and open up a cathouse on the Bowery and contract AIDS. We are also touring with NUCLEAR ASSAULT this summer. (Hooray!)

Merchandise: T-shirts are $8. Specify L or XL (they shrink!). 3 different stickers and a button for only $2. All checks and money orders made to Marie Franco.