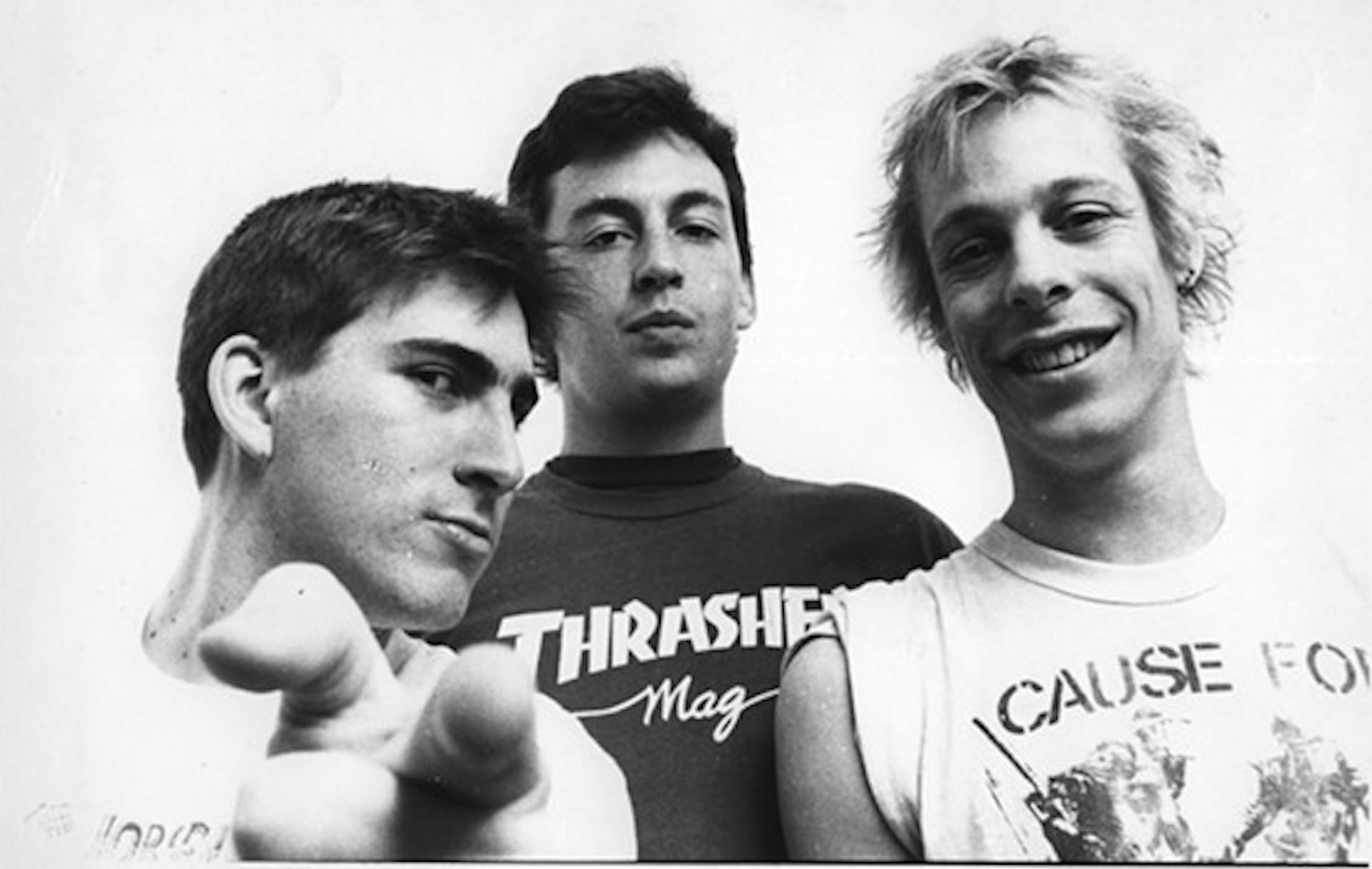 [LOOKING BACK: parking lot interview after a killer set by this great band. Cornered the drummer, who I think was on his way to the can; I wondered why he couldn't stand still -- he admits at the end of the interview he had to pee the entire time. Crap-generic questions (I only knew of them from what I read/saw in the pages of Maximum Rock N Roll), but Tom rolled with me. -- Mickey]

LIFE SENTENCE is a great hardcore band from Chicago. Their first album was very successful and they are now preparing their second LP. We caught up with them after a recent show in Philly.

Who's in the band?
TOM: The present line-up is Tom -- that's me -- 21, on drums. Eric, the guitar playar, is 26. Joe is the bass player and he's 18.
Did you set rid of somebody?
TOM: We got rid of our singer about a year and a half ago.
You were a four piece?
TOM: Yeah, we were a four piece originally, and right after we dumped the singer, we recorded the album. So the album is a three piece, and that's how we've been touring for the last year and a half.
Are all of you original members?
TOM: Yeah.
How long have you seen playing your instruments?
TOM: I've been playing the drums for about 11 years. Joe's been playing the bass for about five. Eric's been playing guitar for about 15 years.

I remember seeing a picture of you guys without any hair. Were you skins?
TOM: No. You may have seen a picture from a real long time ago. I had a skin-head then. Well, actually, we all did. That was about two years ago.
So you weren't skins?
TOM: Well, we really weren't skinheads - we just didn't have hair. I guess we had skin-heads, but no boots or braces here.

Who writes the music and lyrics?
TOM: We all put in various influences and ideas in every song. All the songs on the album were mostly written by Eric. The lyrics were written by all of us.
What basic message do you try to get across in your songs?
TOM: Freedom. Don't let anyone tell you what to do, as far as direct authority or direct influence over you. Listen to people. Listen to what they have to say. Don't directly object to what they're saying. Do whatever you want to do and have a good time. Just respect other people's rights.

Are you happy with your sound now?
TOM: I'm a lot happier with the sound now than the sound on the album. Now, we've opened up our musical horizons. On the album, we did it straight ahead. But now, we're putting a lot more musical styles into every song. You know, some funk, some jazz, and even some rap. We don't have the rap down on vinyl, though.

Do you have plans for another release?
TOM: We already recorded half of the album. Those are the new songs we do in our set. The other half we're going to record in early September.
What label will it be on?
TOM: As of now, we're not really sure. We've had offers from a lot of labels. Our album sold really well, we sold out of our first pressing.
Of how many?
TOM: Seven thousand copies, and now labels are looking at us that weren't before. It might come out on the same label, but we had a lot of other offers.

If offered, would you sign to a major label?
TOM: It would depend. A lot of people, who aren't musicians, in the hardcore scene, are going to say "Oh, you signed to a major label. You sold out." But the bands have to look out for themselves. They have to realize that the band's their life. That's what they're doing at that time, and they might die tomorrow. You've got to go for everything you can while you're alive. What I'm really trying to say is, if we got offered, we might, but we'd have to see what the stipulations are in the contract. We want as such freedom as possible. We've been offered by Elektra (the deal wasn't fair - Mick). The ticket prices would be like $10 or $13. It's outrageous. We wouldn't do that, because we think of ourselves as fans, you know. We wouldn't want to pay $13 to see a band like LIFE SENTENCE. You could see them last year for $6.
You don't think you're worth it?
TOM: Well, I think we're worth it, but it's at the point where you're not in control of everything you're doing. We don't want to lose that control. If we could get a deal like HUSKER DU, we'd definitely sign.
How do you mean?
TOM: HUSKER DU is loved by Warner Bros. Records. They're allowed to do anything they want to. As far as their shows go, they draw a lot more people. In Chicago, they had about four thousand people. With that much pull at a show, a band like HUSKER DU can charge $15 a show, because they deserve it, and also because the band isn't getting all that money. If we were to play a show like that, say we were as big as HUSKER DU, we'd probably charge that much too. But we'd probably only see something like $3 or $4 a head. We're not into that whole "arena rock" thing. Because all it is is bands being manipulated.

Do you like smaller shows?
TOM: A show like tonight (300-350 people) is a lot better than going to see HUSKER DU at the Riviera in Chicago, which holds about six thousand people. That's like where the Kinks and the Pretenders play. A show like this is a lot better, and it's also better than playing in front of fifty or one hundred people. You have to draw a line somewhere - wherever the band feels comfortable. We feel comfortable with an audience like this. I don't think we have enough confidence to play to many more.
So you think you'll overcome that?
TOM: Yeah, but it's going to take a little bit more time.

What about the tour you're on now?
TOM: The tour we're on is to support our album. It's a North American tour. We've already played in Canada - in Toronto and Montreal. Right now, we're in the third week. We're going down South, we're doing a lot of them with DRI.
Are you touring with them?
TOM: Not really, because we couldn't get the same tour promoter - the guy who set them up here tonight. We just did it through our own promoter in New York, a guy who sets up shows. So we have shows with DRI, some with the MEATMEN. Wednesday, we have a show in New Orleans. We're doing a lot of shows with the ASSEXUALS. That's about it.
Is this your first tour?
TOM: Oh, no. We've done three tours.

Are any of you straight-edge?
TOM: We don't want to label ourselves. I don't smoke pot, out I drink beer occasionally. We're not obsessed by anything. Our guitar player though ... he's a walking drug. It affects his playing, but it doesn't chance his personality at all.
Was he lit tonight?
TOM: When he was on stage? Yeah, probably. It's not a real big deal, because he can handle playing. I never do anything before a show. Our bass player's the same way. We don't think we need
it onstage.

Do you guys get along well?
TOM: Yeah, we're all good friends. We've been doing it for four years now, so...

Is the band a full time job for you?
TOM: No, I work. This is nowhere near a full time job.
What do you do?
TOM: I work at a printing shop [in Chicago]. I print t-shirts. I printed this one [a RUN-DMC shirt].
So you get the tour shirts made sorta cheap, huh?
TOM: Yeah, we get a pretty good deal on them. That's why we're not charging $12 like DRI.

Are you into crossover at all?
TOM: I'm into a lot of heavy metal, but it's whatever a band wants to do. A lot of people look at it as selling out, but it's a band's own objective. If that's how they want themselves to be, that's now people are going to view them. It's the same thing with 7 SECONDS - people are calling them '''sell-outs". I personally feel that crossover is a bunch of B.S. The bands that were once hardcore (that doesn't mean they should be hardcore for the rest of their lives), turn to a metal sound, they shouldn't call it crossover. They should just call it their music.

Where do you stay when touring?
TOM: At friends' houses. We had a hotel one night on this tour.
Where was that?
TOM: In Montreal. We couldn't speak French, so there was a definite language barrier there.
Who paid for that?
TOM: We did.
Are you losing money on this tour?
TOM: No. This isn't anything like our other tours. We're finally covering expenses. But the last two tours were really depressing, because we'd go on the road and spend a couple hundred collars each out of our own pockets. I'm out a couple of thousand just for the band itself.
Any big problems yet on the tour?
TOM: No, none at all. It's going great. Canada was fantastic.
They have good crowds?
TOM: Yeah, excellent crowds. We had a lot at both shows. And it was phenomenal how we were treated. It was great.
What was the best city you've played so far?
TOM: Montreal.

Are you hometown favorites in Chicago?
TOM: I'm going to honestly say no. NAKED RAYGUN probably is. They're nice guys. They deserve it because they've been around for six years.
Would you like to be hometown favorites?
TOM: Oh god, yes! We do alright, but not as well as on tour.
What's the Chicago scene like?
TOM: There are a lot of good bands. I'm into a lot of bands that aren't hardcore. Like funk and bands that used to be into hardcore and now sound kind of like SOUL ASYLUM and HUSKER DU. PRECIOUS WAX DRIPPINGS is a really good band. RIGHTS OF THE ACCUSED is awesome. They're just fantastic. NAKED RAYGUN are really good.

What do you think of Philly?
TOM: Philly's really cool. The show was really good. It was cool. It's a nice town, but I don't think I'd want to live here! (laughter)

What bands influence you?
TOM: Whew! Um....
OK, let's put it this way. Who would you compare your sound to?
TOM: I'd probably have to say 7 SECONDS or MINOR THREAT. But when we wrote the songs, we didn't say "OK, let's do the 7 SECONDS approach!" or anything like that. We just wrote the songs, and that's how it came out. The thing about the new ones is they're even harder to define, to pin an influence on. It's just how we thought the song should be played and how we thought we should come across with the message. That's how we wrote the songs.

Any last words?
TOM: I really got to go to the bathroom.