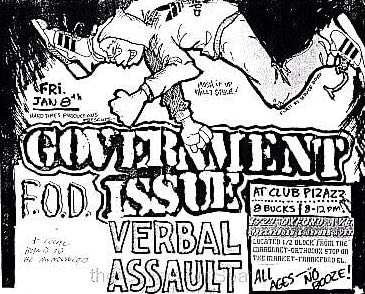 F.O.D. hasn't really played in Philly at all for many months. It was well worth the wait. With a sound system that could finally accommodate their break-neck thrash, they treated the audience with all of their old hits, along with some surprisingly interesting and excellent new material. The crowd response was unusually well-receptive. Perhaps everyone missed the kings of Philly thrash as much as I did. Welcome back!

OK, OK, VERBAL ASSAULT's new LP, "Trial," doesn't really tickle my fancy. But, boy, when they play its tracks live, it absolutely blows me away. The guitar playing of Pete Chramiec was the definite star his intricate style and energetic stage presence totally overshadowed, in my opinion, the rest of the band. Maybe because, unlike their first album, the second LP has the guitar as the star everything else secondary. But everything just seemed to click into place for VERBAL ASSAULT, as they played an energy-driven, polished, fun set. This is one excellent live band.

The last time GOVERNMENT ISSUE played in Philadelphia was three years ago. I didn't see them, so I can't compare this G.I. set to another. Tonight, G.I. was breathtaking. Of course the star of the show was their vocalist, John Stabb. All eyes seemed to be fixed on his strange adrenaline-driven stage actions, which included convulsive moves and a bizarre use of items found around the stage. Visually, it was a very entertaining set. Unfortunately, you could barely hear his voice. Which brings us to the music. Although he seemed to be in the shadow of Stabb, Tom Lyle should definitely be recognized. His passionate style of guitar playing seemed to really bring an aura of power around the stage. At least for me, the sound just cut right through my body. An inspired set, it seemed, as they played for a very long time, giving us a fair sampling of tunes from all of their releases. Although I'm sort of wary of this new "Giant" label that so many excellent bands like G.I. are quickly being signed to, I'm convinced that G.I.'s dedication is still there.