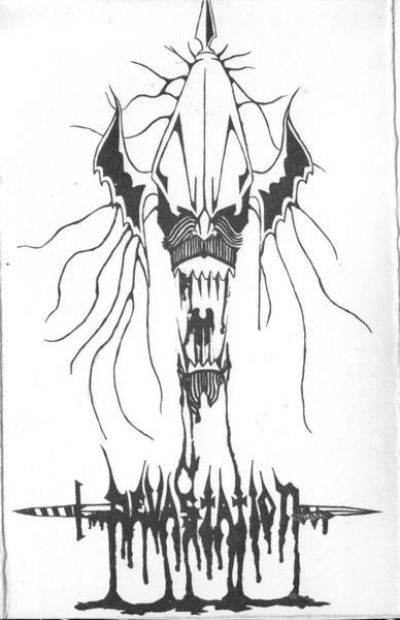 DEVASTATION — “A Creation Of Ripping Death” demo tape
DEVASTATION is a Chicago area death/thrash metal band that was formed in January of 1986 by drummer Pat Buckley and guitarist Erv Brautigam. The line-up is completed by Frank Ciamoi on bass, and new singer Bill. The demo was recorded with former vocalist Duane Rasmussen, who left to get married. The band is mainly influenced by AT WAR, SLAYER, MISFITS, and SAMHAIN, but Frank is into S.N.O.T., OUT OF ORDER, and GENERATION WASTE.
DEVASTATION “A Creation Of Ripping Death”: Good, nightmarish thrash from this talented Chicago outfit. Eerie yet interesting tracks like “Cranial Hemorrhage”. “Nuclear Winter” and two others. Recommended for death metallists only. [TONY]