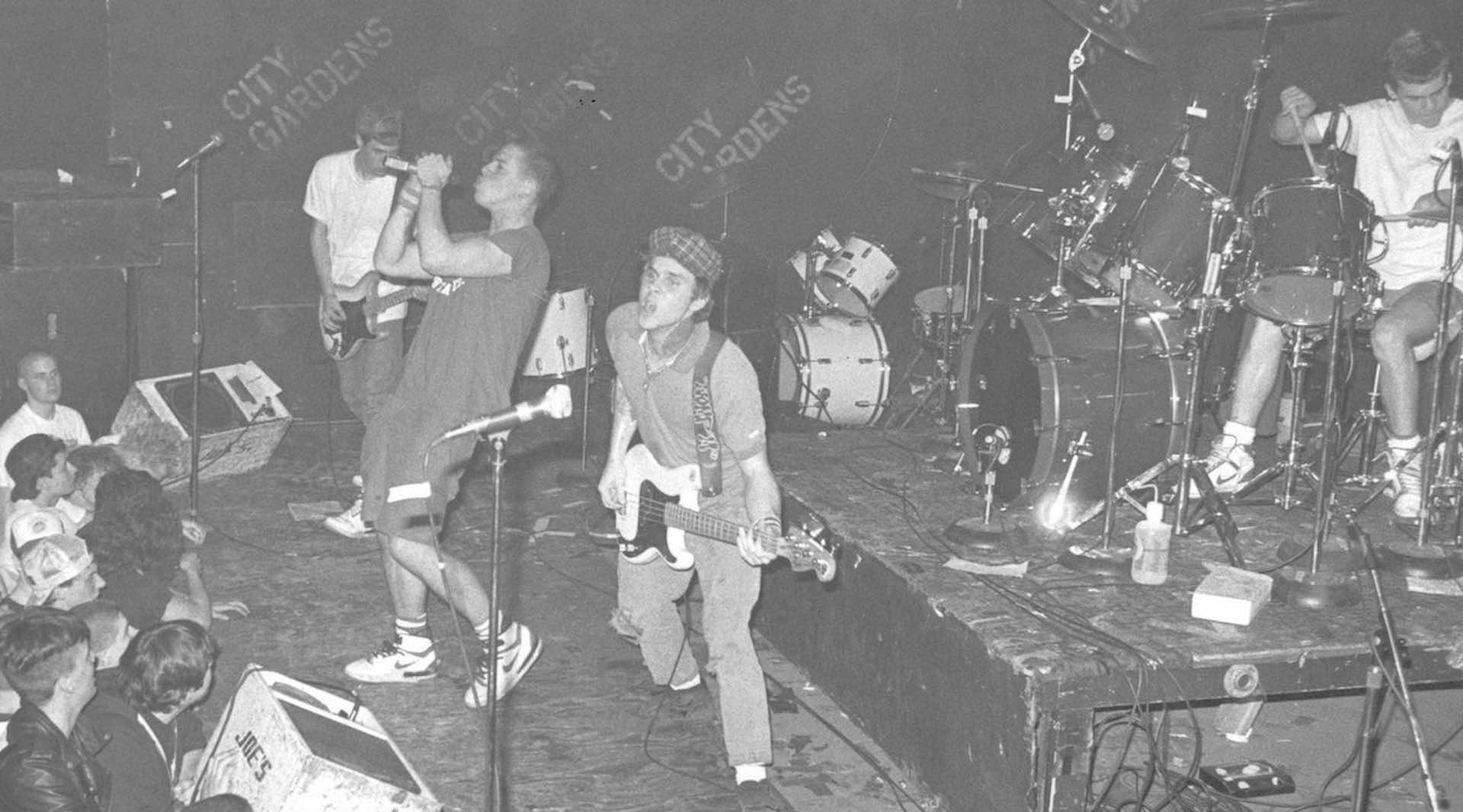 [LOOKING BACK: Noted for Richie's memorable vocal style and the band's willingness to inject elements of other genres into their sound, Underdog stood apart from their NYHC contemporaries. And you can sense a bit of chip-on-shoulder that the weren't embraced by the tight-knit community centering around the posi-youth scene. They broke up after their release for Caroline Records, "The Vanishing Point" around 1989. Although Underdog had popularity in the late 1980s, there is a newfound respect for their blend of powerful melody and intense live performances. Bridge Nine Records released their entire discography in 2010, and it's definitely worth picking up. -- Mickey]

TS: Give us a brief history of UNDERDOG.

RICHIE: I used to always see Russ at shows and talk to him, and after he left MURPHY’S LAW, I went up to him, told him I was getting a new band together and needed a new bass player. He said he was into it. I was already playing with Dan.

TS: Just fooling around, or were you in a band?

RICHIE: Well, Dan and I were in a band together called NUMBSKULLS, but we wanted to start a new band. So, when Russ came into the picture, we started writing a bunch of new songs. Then we formed UNDERDOG. That was in…

RICHIE: We played our first show in early 1986. 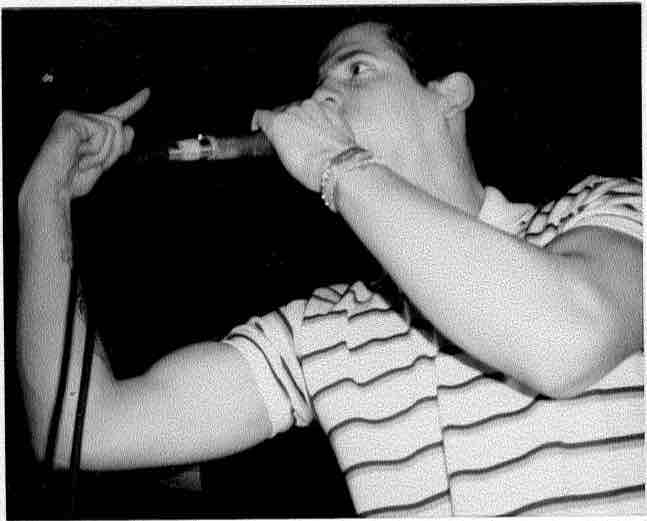 TS: How was the initial response?

RICHIE: In New York City and in Albany, it was good. Places further away like Connecticut and Rhode Island hadn’t heard us. Then we got this demo out. We were a band for maybe two weeks when we recorded the demo, which incidentally turned into a record, although it wasn’t recorded as a record. The demo got really popular, so that really boosted our following, and the shows went really well.

TS: What about this record?

RICHIE: Our demo turned into an EP. Bessie from New Beginning Records called me and said “We really like your demo. We think it’s good enough to be a record.” So I said, “Ok, let’s do it!” So they just pressed our demo into a record. It took them like a year after we recorded it to get it out.

TS: Has you sound changed at all since then?

(Everybody looks to Dean, who has been mysteriously quiet so far, Dean says nothing.)

ARTHUR: Naw, I got kicked off.

RICHIE: They couldn’t accept the fact that he’s a homosexual. (Laughter)

RUSS: They aren’t an open-minded group of people.

TS: What do you try to express with your lyrics?

RICHIE: I write the lyrics, but I don’t know…

TS: Well, you’re not political, are you?

RICHIE: I’m not specifically. A lot of the songs are…

RUSS: … our own politics, not exactly government politics. 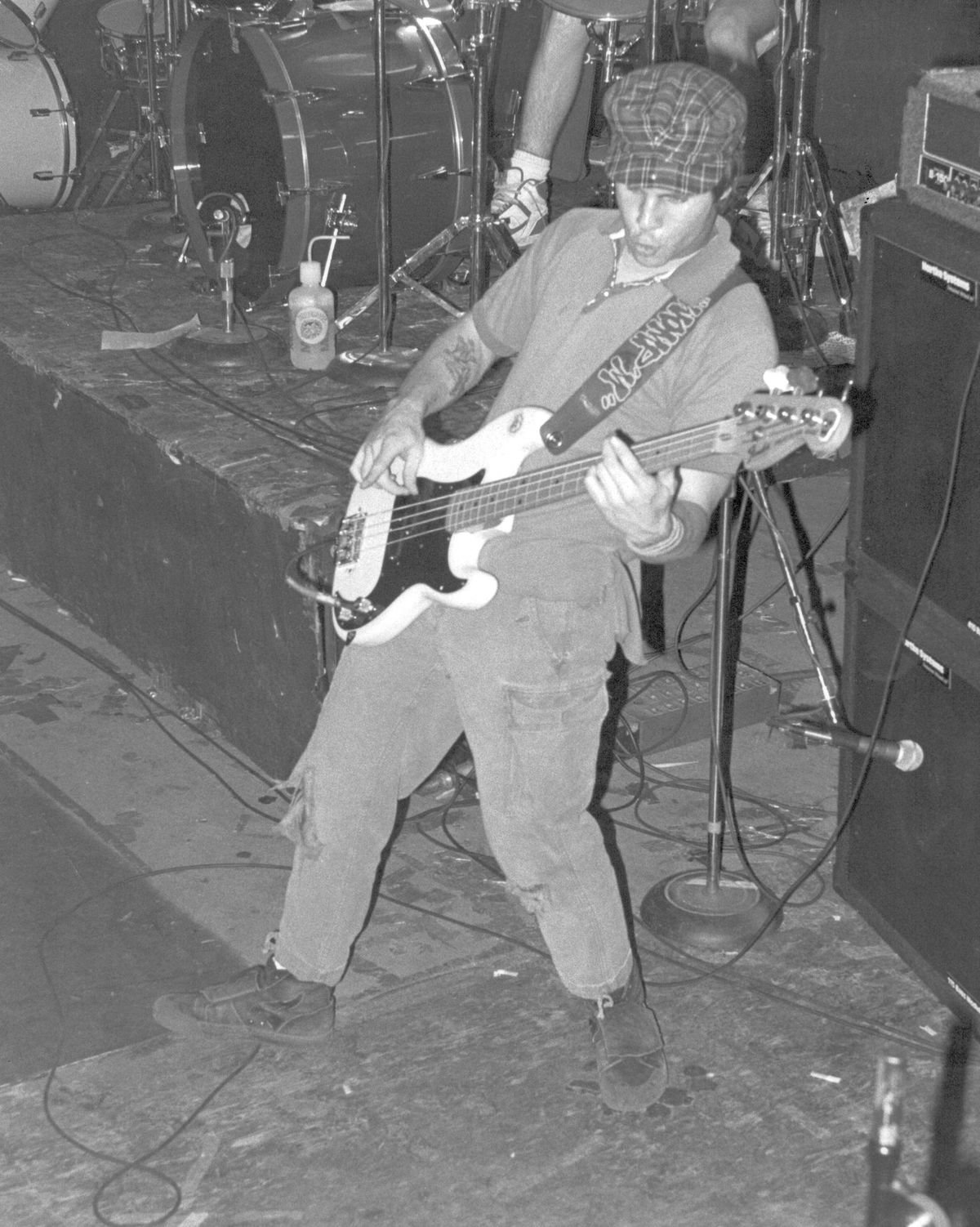 RICHIE: They can be applied to politics. All of the songs are heart-felt and sincere, so I write about, you know, things that I’ve experienced. In all of the lyrics, I try to make the message as clear as possible, so if you take any particular songs, it should be self-explanatory.

TS: How popular are you guys in New York City?

RICHIE: We have a really good following. I feel that our following thinks we’re really unique and special, that we have a very unique sound, and I agree. We can pack CBGB’s.

TS: Do you think the new wave of NYHC bands, like you, YOUTH OF TODAY, WARZONE, etc. are better than the “Big Three”? (AGNOSTIC FRONT, CRO-MAGS, & MURPHY’S LAW)

RICHIE: Well, each band is different. I don’t think that we’re like any of those bands. I mean, a lot of those bands are trying to revive that ’82-83 NYHC feel.

RUSS: Dean, would you shut up! (Laughter)

RICHIE: Which I think is good – that whole New York/Boston thrashy/skank sound, but I don’t think we fit in with those bands. They’re very similar, and I feel we stand out. Not saying we’re better or worse, but we’re different.

TS: It seems like a lot of New York bands are Straight-Edge. Dean, do you think that’s trendy?

DEAN: I don’t want to answer that question. (Laughter)

ARTHUR: But of course after it gets big, like the way YOUTH OF TODAY made it big, it’s kind of trendy with some people. But as long as it’s not discriminating against someone because they’re not…

RICHIE: Not only that, why would you want to be labeled? Like, “there’s Arthur, he’s straight-edge.” It’s kind of silly. It was cool in 1982 when Ian MacKaye did it, because he went to high school with a bunch of rednecks who were just getting high all the time. It was something he started where…

ARTHUR: He was making a statement.

RICHIE: But it’s not cool for these bands to do it now. It’s just a big trend.

TS: Do you associate with Chris Williamson?

RICHIE: Speaking from personal experiences, he’s been good to me. He’s been cool to us. We’ve heard horror stories about him, but then we’ve talked to the people who have worked with him, and if anything, he’s better than the average promoter. He pays people what he says he’s going to pay them. Sometimes his door prices are a little high, but that’s about the worst thing I could say about him.

RUSS: He hooked us up with a show on Halloween and did everything he said he’d do.

RICHIE: He gave us more than we asked for, gave us our guarantee, and treated us very well.

RUSS: He gave us just about everything we asked for. 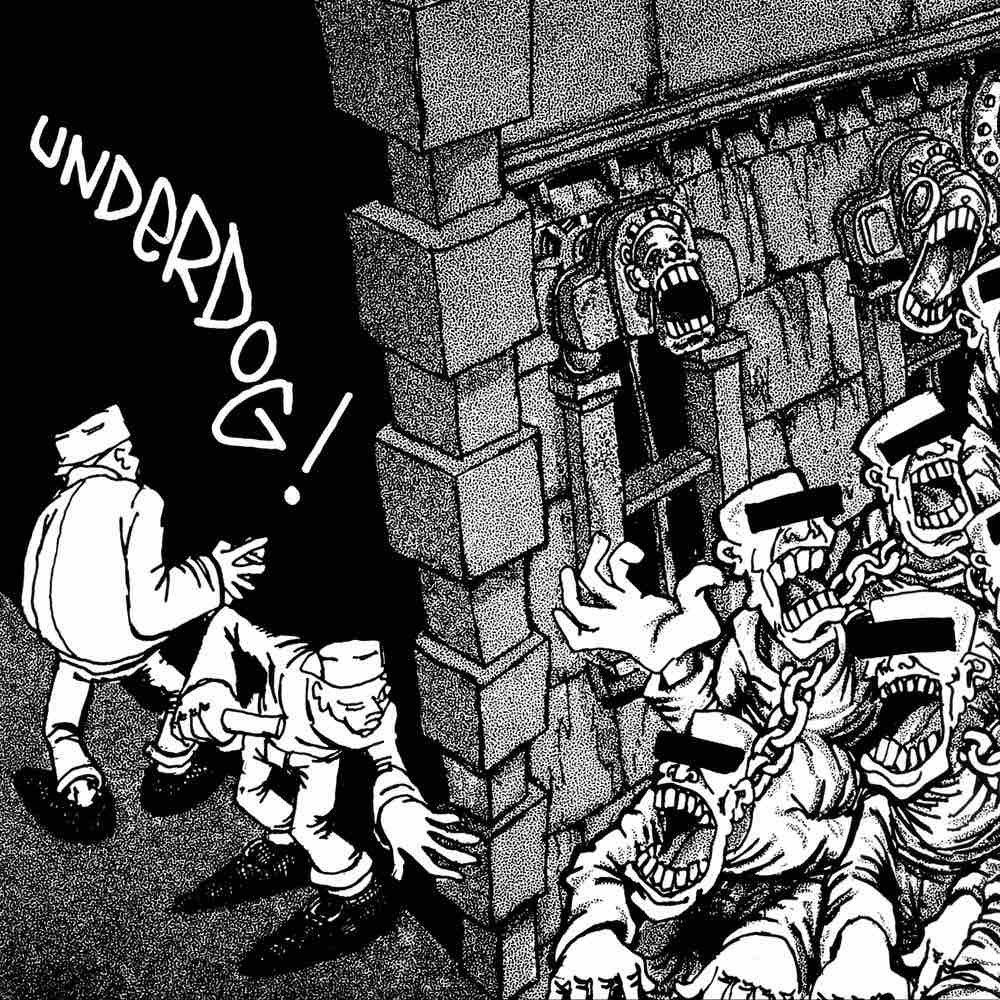 TS: You guys toured this summer. How was that?

RUSS: Everything went fine. We played a lot of places, like Fenders, Gilman St… Fender’s was the best show.

TS: What do you think of Maximum Rock ‘N Roll’s Gilman St. Warehouse?

RICHIE: I wasn’t with them when I played Gilman St. I was playing guitar with YOUTH OF TODAY, and I played there. I think that the people who run it, Tim (Yohannan) and Martin (Sprouse) are cool, but the club kind of fails. I don’t know why.

RUSS: Our show was messed up because we played on a Sunday, and there was a big show that Friday night, and another that Saturday night. Everyone probably spent their money already, so they’re weren’t that many people at our show. But the people that did show up had a good time, and we played well. 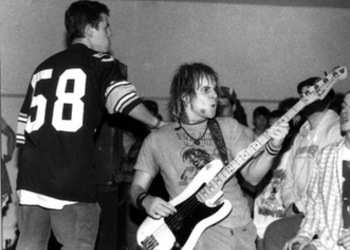 TS: Do you listen to Howard Stern (a NYC DJ)?

ARTHUR: I have to go against the grain. I hate him.

RUSS: We listen to Howard’ til ten, then the station turns.

RUSS: Haven’t you heard any messed-up things about us?

RUSS: We’re a skateboarders. We were in the February issue of Thrasher.

RICHIE: Richie has a bad rep. He punches out anyone he doesn’t like. Everyone thinks I’m a snob and that I hate everybody.

DAN: And Russ used to be “Shaggy.” (Laughter)

TS: Is CBGB’s having shows again? Did YOUTH OF TODAY get it closed by letting kids stage-dive?

RICHIE: I wasn’t with them when they got the place closed.

RUSS: Their show got the matinees cancelled , but now they’re back on.

ARTHUR: It was their show that got the shows cancelled, but it wasn’t their fault.

RUSS: It was Ray from WARZONE.

RICHIE: Wait. Let me tell you the deal about that show. All of the bands that played (GORILLA BISCUITS, SIDE BY SIDE, YOUTH OF TODAY), their whole show – (Burp!) – is audience participation – stage-diving, sing-alongs. When all three of those bands were playing, people were just diving all over the place, and the owner of CBGB’s just blew his top.

DAN: The last time we played there, someone broke their leg.

ARTHUR: The majority of the people who said anything were the kids. It got blamed on some of the bands. I’m not sticking up for anyone, but I don’t think it would be fair to blame it on them.

TS:  Which one of you does graffiti?

RICHIE: I used to, like years and years ago.

TS: I don’t know, compared to the whole New York City scene in general, you don’t seem to be widely known outside it. 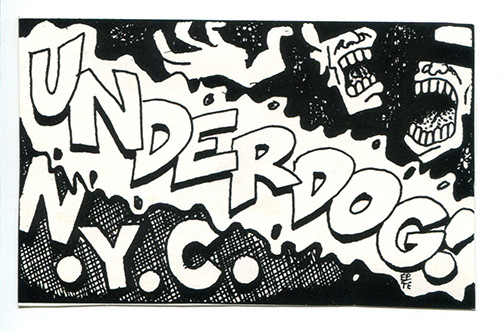 TS: Like that New York City Hardcore EP that was just put out; it seems almost like a clique of certain bands.

RICHIE: I’d venture to say that we’re the most popular unsigned band. We have a big following, we headline clubs in New York, and we get a great turnout.

RUSS: It’s just that those bands get so much exposure because they’re on major labels.

TS: I’m talking about bands on the “Together” comp. It seems like it was just a bunch of friends putting it together.

RICHIE: It is. There’s another version of that coming out that has UNDERDOG songs on it, but not with me singing – it has the old singer, Carl.

TS: Why were you playing in YOUTH OF TODAY?

RUSS: Because he’s a dick. (Laughter)

DAN: He was in a period of disarray.

RUSS: He was hooked on crack for a while.

RICHIE: I was really good friends with John, and out of all of them, he’s the one I’ve remained friends with. At first I tried to play in both bands, because I wanted to play guitar and I wanted to sing. So I played guitar with them for a while, and I realized that I wasn’t able to put my ability to full use in that band. And I was tired of not having the creative input that I have in UNDERDOG.

RUSS: (emphatically) Yes! You mean the band is Ray.

TS: Do you have plans for another release?

RUSS: Hopefully we’ll have an album out by summer.

TS: Do you have a label yet?

RUSS: We don’t know yet.

RICHIE: Our plans are to record an album this summer, and then a nationwide tour with HELLHAMMER and VOIVCD.

RUSS: We want to have a good time, spread our word…

TS: You’re about to go on stage now, so do you have any merchandise?

RICHIE: We have the cheapest t-shirts. They’re custom-made, different color-arrangements, 2-sided, 100% cotton (well, the white ones are 100% cotton)…

RICHIE: Don’t send the money to me, because I’ll just spend it. (Laughter)