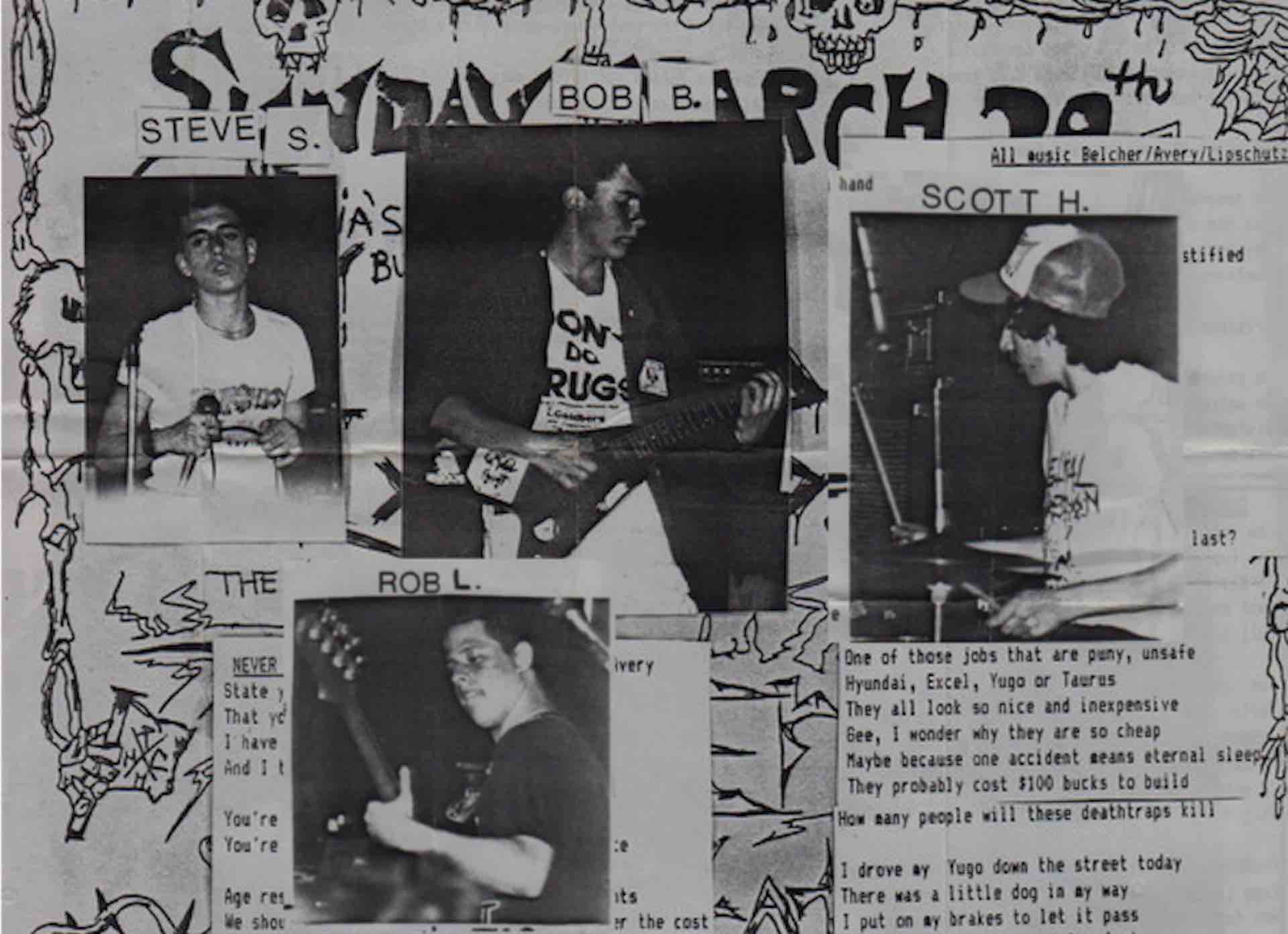 [LOOKING BACK: I auditioned for EAB once. They liked my performance, impressed by my ability to sing to the rhythm of the music -- less of a compliment to me, certainly, than a ding on their current singer. But, alas, it was the summer before college, and although it was a VERY difficult decision to make (let's see... EAB or college... EAB or college), I had to tell them I was not interested. In any case, Scott Helig, the drummer of EAB, encouraged us to start this fanzine in the first place (as he himself was the publishing magnate behind Total Thrash fanzine). Scott was also the Malcolm McLauren to my and Tony's never-off-the-ground punk band FLAG OF HATE. This interview was done like 13 year old girls -- I wrote Scott a list of questions in class, handed it to him in the hallway. He returned the questions later that day. BFF!!! -- Mickey] 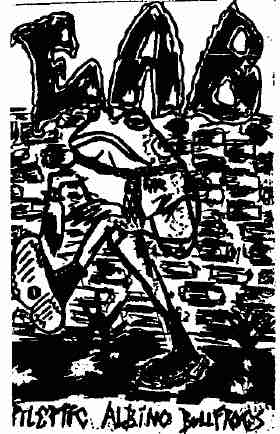 AB (Epileptic Albino Bullfrogs) is a hot new band from the great Northeast Philadelphia. They've played a few shows, and will be headlining their first show in late March. I can only describe their MUSIC as thrash, but they're different from other bands in that their lyrics are really good; sometimes serious, soetimes tongue-in-cheek. And there is great variety in their songs. The following interview was done with EABs drummer, Scott Helig, who is a good friend of mine and Tony's.

OK. Basic questions first. How long have you been around? How did you get together?
We've been around since July '86. We met at a DRI show and I was asked to try out and was accepted. A month later we acquired Steve.

The name EAB is one of the crazier names I've heard. How seriously do you take your music?
We take ourselves seriously, but not overly serious.

With a name like EAB and your young age, do you find many people not taking you seriously, almost looking down on you?
I find that people are surprised, because we look young, but I don't think they look down on us 'cause we're young.

Who writes your lyrics? Where do your ideas come from?
We all write the lyrics. The ideas come from what angers or upsets, at least for ME. I can only write a lyric about something that angers me.

Who writes your music? What bands influence you?
Bob and Rob write the music. Our influences are MDC, MINOR THREAT, SLAYER, 7 SECONDS, METALLICA, CDC, DRI, L'ARM, and other hardcore bands, but I feel we have some originality.

How would you classify your music?
I'd classify it as punk or hardcore. Labels aren't important to me though. We have a heavy edge to our music.

What's your favorite fast food restaurant?
Taco Bell is godly! The food rules, but they should use better quality kangaroos for their tacos.

Many EAB rehearsal tapes are floating around, but is there an EAB demo In the future?
Look for a demo soon. Don't ask me when, that is! It'll have 10-13 songs, but I'm in no rush. I'd rather wait and put out a good demo. I heard that we should be releasing a demo soon, though.

Which of your songs do you like the most?
I like "Money is Burned", "Urban Rednecks", and "Sinful Past" the most. But I like all the rest, too. Lyrically, my favorite is "Sinful Past". 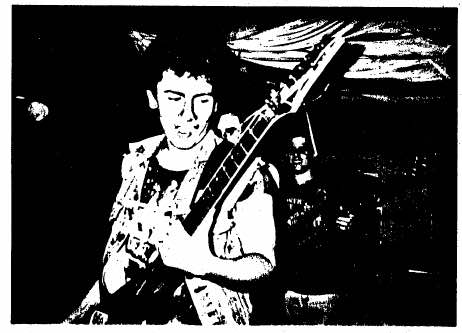 Why did your other guitarist leave?
He wanted to play more complicated music since he's a talented guitarist. He now has technical speed metal band, FEAR OF LIFE. We're still good pals. Also, it's a lot better with one guitarist.

What do you think of the Philly scene?
The Philly scene is great! There's lots of "newer" bands, like LEGITIMATE REASON, PAGAN BABIES, and ANTHROPHOBIA, and minimal fights and violence.

Your first public appearance was a last minute substitution for AOD (as chronicled in the Dec. issue of THRASHER). When was this? I wasn't there, so how did you sound? How nervous were you?
I think the "show" we did was Sept. 14. I guess we sounded and played lousy, but when we played, we were only together for 2 months and we rarely practiced. I guess it wasn't too bad, considering the circumstances. We had to come onstage at the last minute and Rob and Bob used instruments unfamiliar to them. I was real nervous at first, but once I started I wasn't.

What do you think the crowd reaction to EAB has been so far? Do you think the scene's accepting you?
I really can't say. It seems that some like us. We'll have to play more shows to find out how people are taking to us. I don't care if they don't like us. As long as we are comfortable with what we are doing, and we are pleased and having fun making music. 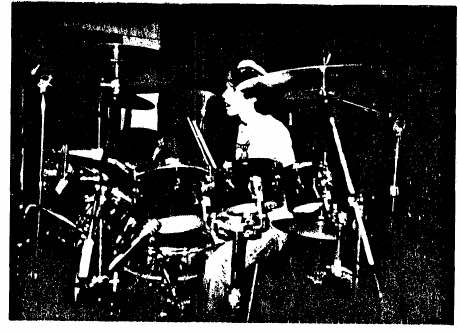 Where do you rehearse? Do the neighbors complain regularly?
We rehearse in Bob's basement. No complaints yet. When we practiced at ay house, neighbors once threw little things at my window, but its cool at Bob's house.

What do you think of the Grammys? Did Steve Winwood deserve 3 awards?
I don't pay attention to those pop stars. I never even heard of Steve Winwood, much less that he won 3 awards. He's god!

What are your favorite TV shows?
I don't have a TV! Ha ha! Hy dad in NJ does, so when I'm there, I like wrestling, G.L.O.W., Golden Girls, the news, and knitting shows.

What are your favorite comic strips?
Most newspaper comics suck. Some cartoons are cool - Charlie Brown, Smurfs and Gumby all shred.

What's the biggest problem EAB has had to face so far? New ideas? Inner tension? Acceptance? What?
The biggest problem is arguing about the lyrics. We can never decide on lyrics, because the person that wrote them wants to use them, but usually the others hate them.

What's your opinion on religion?
I really don't mind it, but if it helps you, than it's good. My Georgian friend recently enlightened me on the good feeling one has when being at peace with God. So I can accept people who are religious, as long as it doesn't destroy people (like TV preachers).

Has your sound and/or lyrics changed alot since you started? In what ways?
I feel our sound has become better, more original, and we are trying to create a sound a bit different from generic thrash, while still being thrash with a metal edge. In the beginning, it was typical "crossover* type stuff.

What are your opinions on the metal/hardcore crossover?
I feel that if it brings people towards mutual understanding, it's good, but ignorant ones sometimes misunderstand it.

Recently, I saw a MOTLEY CRUE tape in your schoolbag. Care to explain?
Well, um...er... I hate to admit it, but I'm a closet poser.

What do you hope to accomplish in the future?
Release an LP, do a tour, release double live albums, solo album, etc... Just kidding! Have fun mostly, but I'd love to release an LP and travel.

Any last words?
Thanks for the questions and your interest in EAB. Support this 'zine. Tony and Mickey are great people, near deities, I must say. MOSH OR DIE! (ha ha!). Don't eat false bagels.

So there you have it. The demo will be out soon, and for more information, write EAB.