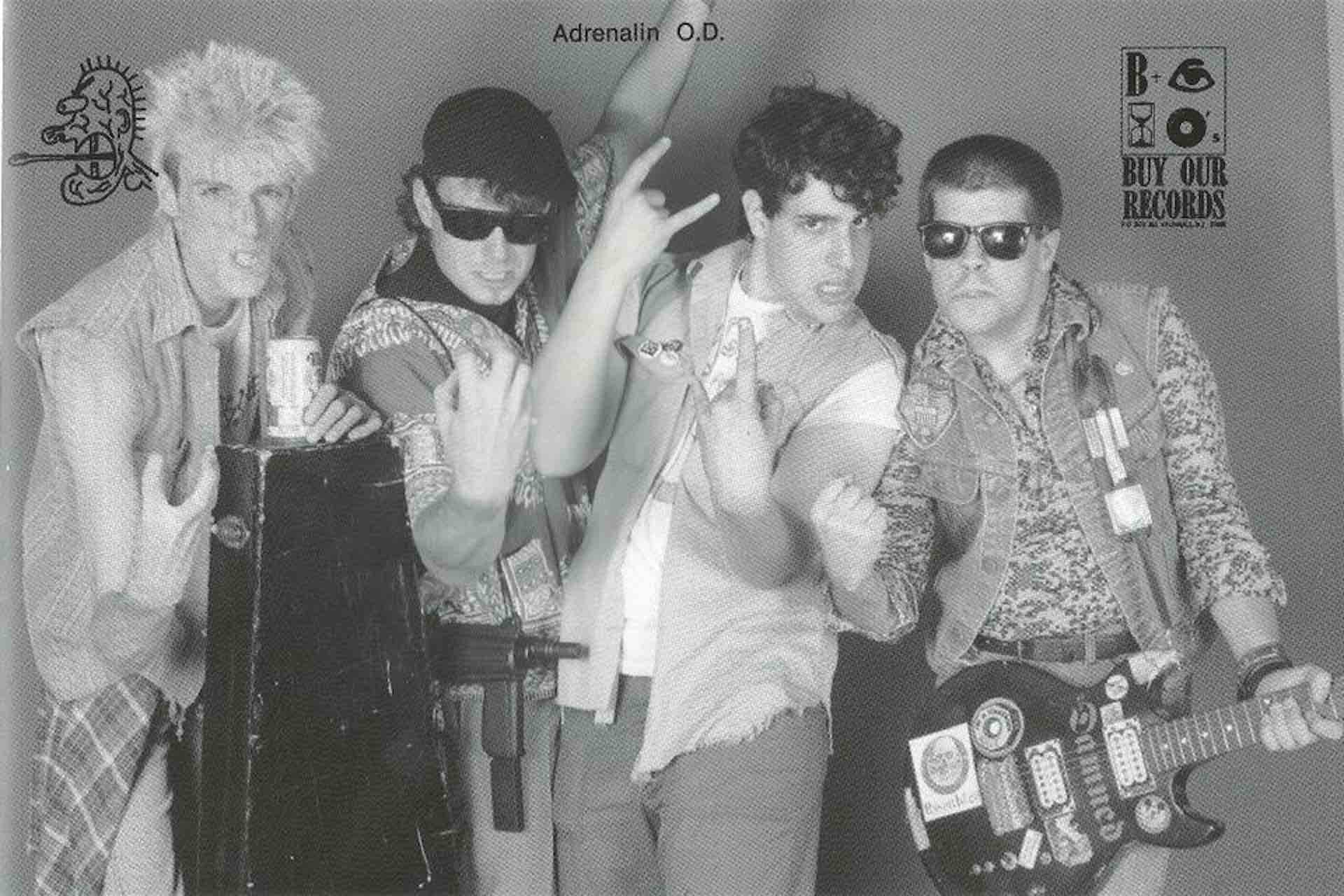 [LOOKING BACK: Incredible band. If only for responding to these HORRIFIC questions. If there's a single thing I wish I could do over is to go back and ask pretty much every single band we interview and pose some real questions. Like AOD. I mean, these guys were fairly well-known, and I'm asking them generic shit like "Who's in the band?" But what made this 'zine kinda neat is that the bands were always pretty cool so that at least one of their responses had a neat piece of information or something clever. AOD rolled with the shitty questions in this mail-questions-and-get- answers-mailed-back interview, providing some genuinely funny responses. -- Mickey]

ADRENALIN O.D. is a well known punk band from the depths of New Jersey. They have gained recognition from their two LPs which are classics of "fuzzy" thrash. They are also some of the funniest guys you'd ever want to meet. Mickey talked with all the guys from A.O.D.

First of all, can you give me a little bit of band history?
We formed in '77 under the assumed name of the SEX PISTOLS. We changed it after about 3 years.

Your new album - "Humongous..." -- is one of the best hardcore albums I've heard yet. But how do you feel you stand out from the other bands in the scene?
We stand out like a sore thumb. Like a pink M&M.

This will probably establish AOD as one of the premier bands in the scene today. Your melodic thrash sound, combined with killer lyrics, have made you an inspiration to many up and coming bands. To what do you attribute this success? How are you handling it?
Stop kissing our ass all ready, we're doing your stupid interview. Fame hasn't gone to our heads. Peasant!

So you have any advice for new bands?
Kill yourself, there is no future. Quit now, there's no hope. Music is hell.

In your credits you say you are cool cause you didn't sign to Combat records. Did you have a chance to? If yes, why didn't you?
We were approached by all the metal labels, especially Metal Blade. But dudes, we are not a meta! band. Combat is the Mystic of metal.

What is your opinion of your new LP. Do you feel it is better or worse than your previous work?
Sounds good, but the packaging could be better.

How has the response to the LP been so far?
Reviews are great. We should be out of the first pressing of 10,000 in about two weeks.

What do you think of the new speedcore fad that's hit?
Speedcore's a fad. Fads are for fags. We set fads, not follow them.

Do you think HC and heavy metal could ever unite?
Two labels meeting in unity? Why? When Ozzy and Jello kiss and go skipping through the field of poppies together, it will unite.

What are your future plans?
To date an actress/model.
To find my mind.
To fish and eat omelets.
To go solo.

AOD is a great hardcore thrash band that alot of metallers are getting into to. Their music rips, and they're funny as all hell. Check out their great LPs.